History
Ha ha. Sorry, I used the Romanian name for this one just to get your attention. Dear reader, I present to you this once-infamous political prison, Doftana aka the Romanian bastille. Once one of the most cruel, harshest prisons in Romanian history, it's now largely forgotten about by Romanians, and quietly rots away near the Carpathian mountains just outside the village of Campina in Prahova county. Built in 1895 as a place to house nearby workers for the mine workings, it was converted in 1921 to a political prison for communists, among which the most famous prisoners were the former prime minister of Romania Gheorghe Gheorghiu-Dej (1952-1955) and former communist dictator Nicolae Ceaușescu (1968-1989). Both were imprisoned as young adults for their ideology, subjected to some of the foulest, most deranged treatment you can imagine. Doftana would eventually close in 1958, before being transformed into a museum during the communist period, in doing so becoming in effect a "communist shrine." Eventually, in addition to an earthquake in 1977 and declining visitor numbers it closed in 1990, after the anti-communist revolt in 1989. Since then it has been left to rack and ruin, its once impenetrable walls crumbling at the mercy of harsh weather, metal thieves and vandals. For a more in-depth history, I'm not going to make a pastiche of someone else's already superb write-up, so please make a visit to Darmon Richter's Bohemian Blog here. I'll add my own interpretation below.

My visit
This was a place I wouldn't miss at any costs, despite it not being that epic compared to the likes of H15 and such. At the same time, my nerves were sky high; if you've read the last two reports on this place, you'd think that even if the place is a ruin it would be a near-impenetrable fortress. Yes, literally. Dragging Arold to Campina with me, we got a taxi driver to take us there. A young man about my age, surprisingly he spoke English fluently and talked to us about the prison, how he used to play there with his friends when they were children. Nowadays however, he warned that security had been put in place to stop us getting in. Having spoken to Darmon about it before, with the dogs free roaming the place I thought they would be virtually unavoidable. We got to the gates, and all was dead. The cabin on the right was empty and derelict now. However, I nearly screwed things up when I walked up the (I assume) guard's driveway to their house, making the dog bark. Get back.

Right, we can't approach from the front. I need to flank it from behind, just like I planned. I made my way up a road that went along the hill with Arold, until I found a gate to an empty field. Arold wasn't feeling up to it unfortunately, so I bade farewell to him before he made his way back. Down the hill, I thrash my way through bushes and trees before I spot a grey building. It was the toilets. I got to the fence, all looks quiet still. No dogs. Jumping straight over the fence, I could tell the place was well looked after, with all the grass cut regularly and open space. Danger zone!

I first check out the guard towers that are dotted round the place, but all the stairs inside had long since rotted away, so they wouldn't provide me with access. I had to keep running, so I got to the entrance building and BOOM! I was in within seconds, having not seen a single soul. So far so good, but still nervous. I made my way into the courtyard, which by contrast had been completely let go and was overgrown. From here all the buildings were wide open. Time to start shooting. 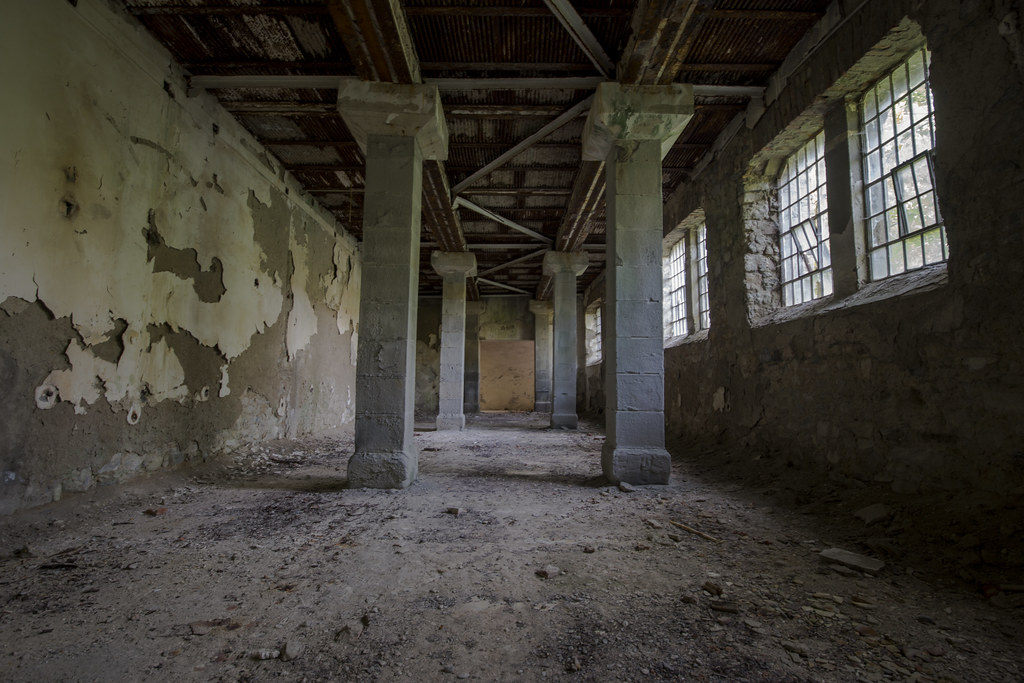 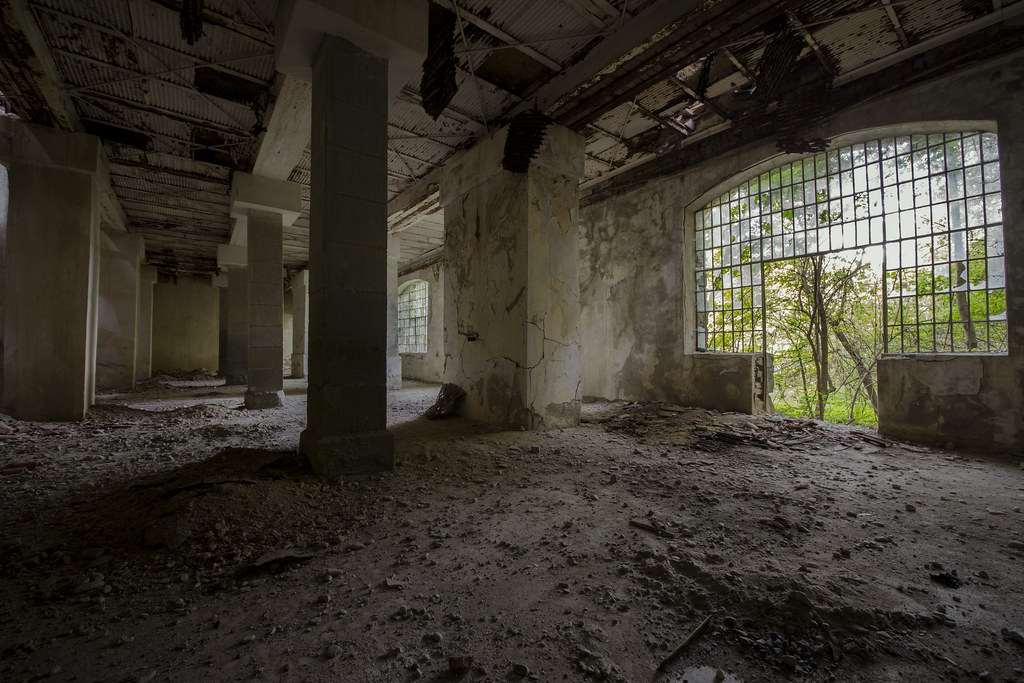 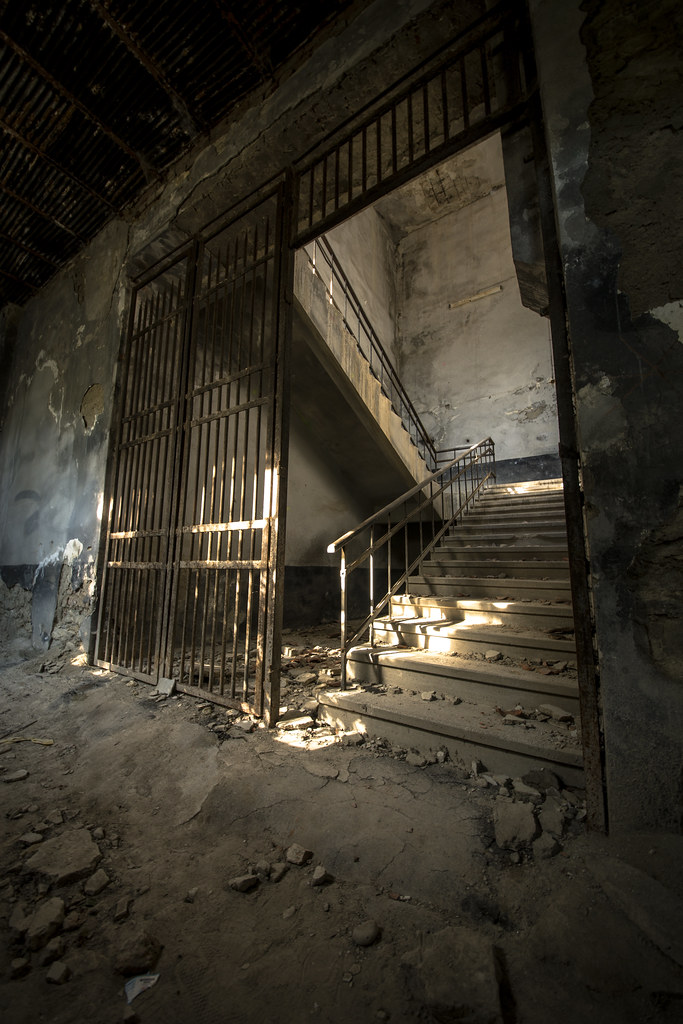 Having seen footprints and even a dog pawprint in the dust, I was rightfully on edge and started shooting the upstairs part first. Nevertheless, shooting Doftana was absolutely fascinating, and I sought to capture it for what it is: a cold, horrible, crumbling concrete shell. 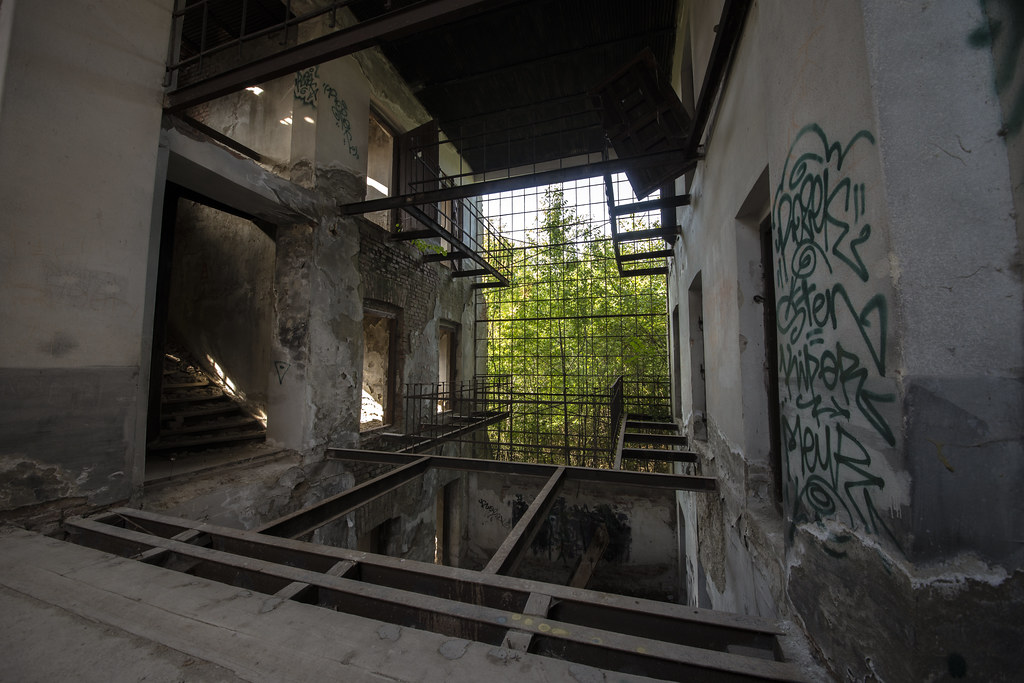 The cells above were part of one of the more open, less restricted wings for prisoners. These prisoners were allowed to socialise in the courtyard, but if caught trading cigarettes and contraband they would be sent to H, the block dedicated to the most barbaric of treatments. 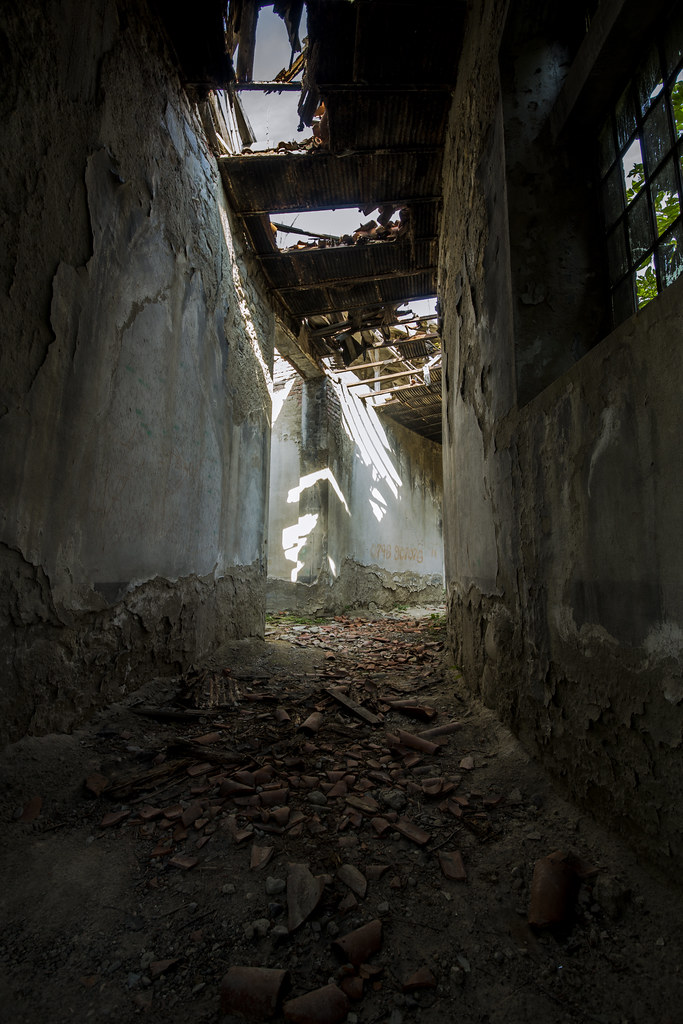 This block I assume was dedicated to prisoners who were to undergo hard labour. Knowing what they were subject to, I can only think the conditions were marginally better than H. 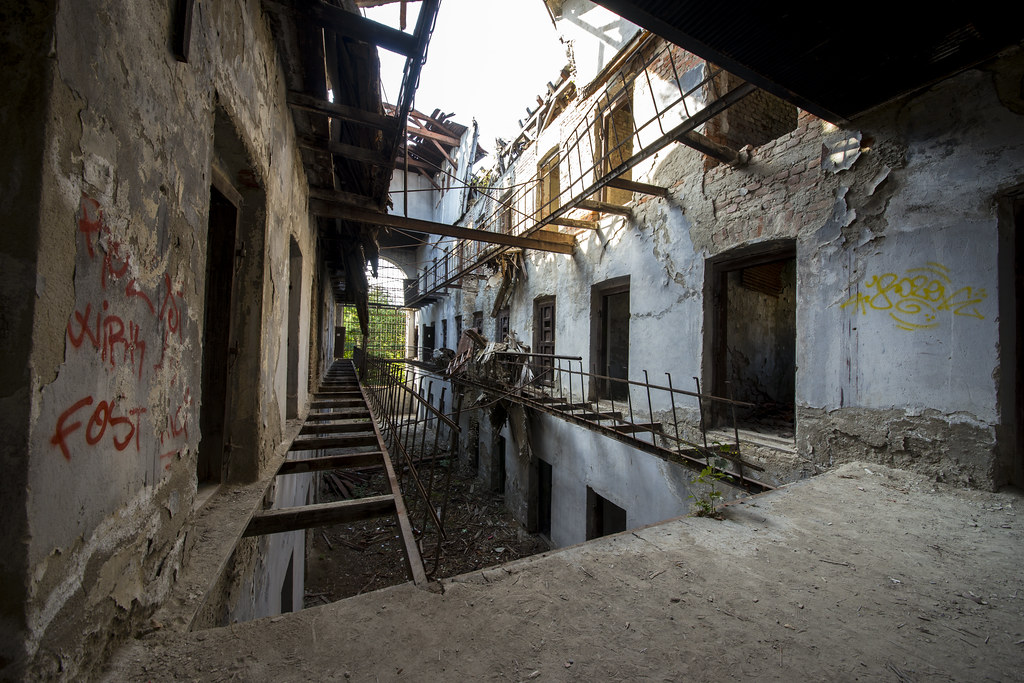 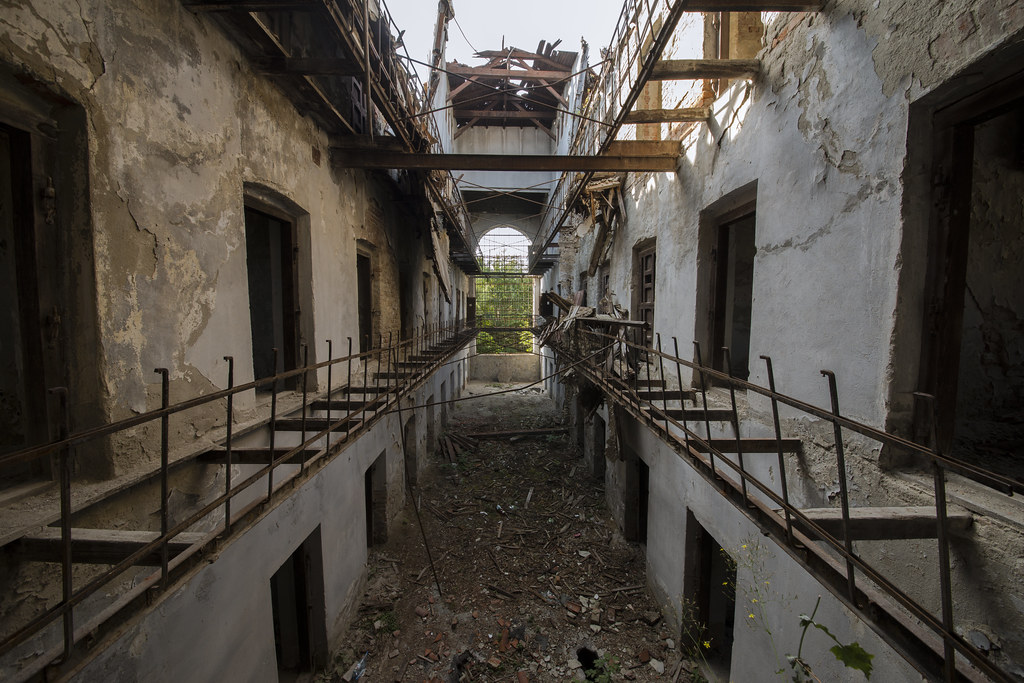 As you can see, it's absolutely clear what a dire state Doftana is in. It won't be long until the entire cell block collapses in on itself, finishing Doftana off. 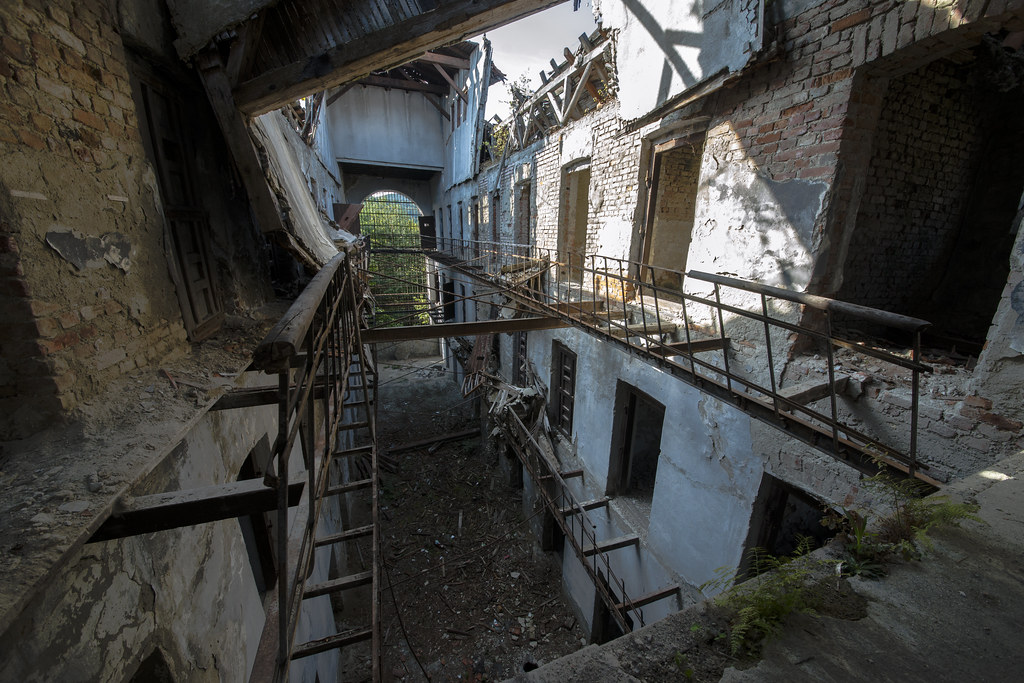 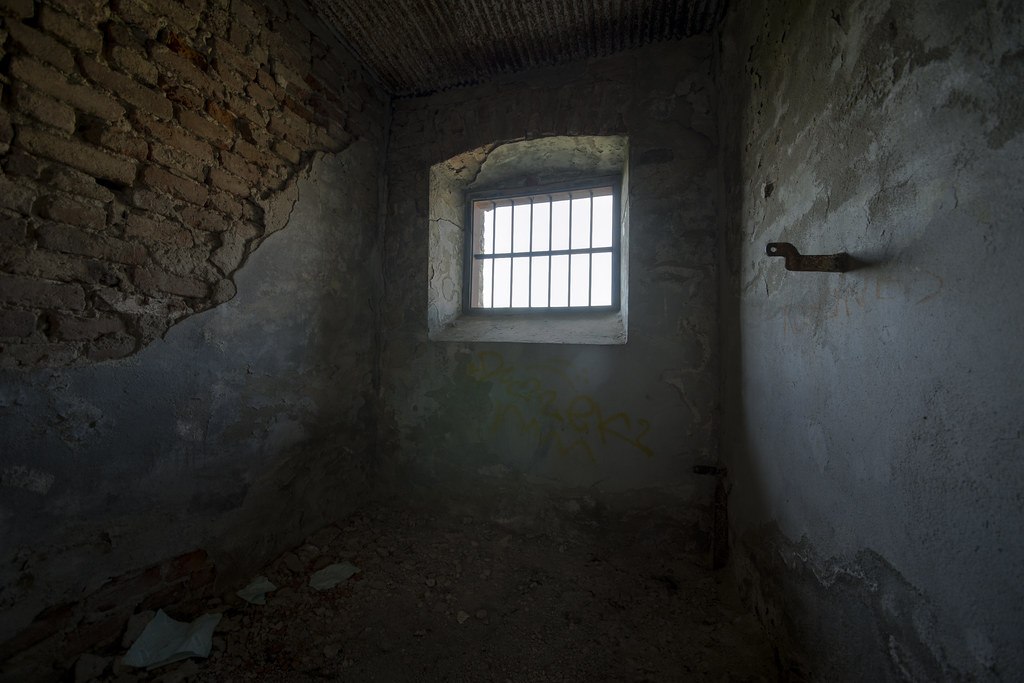 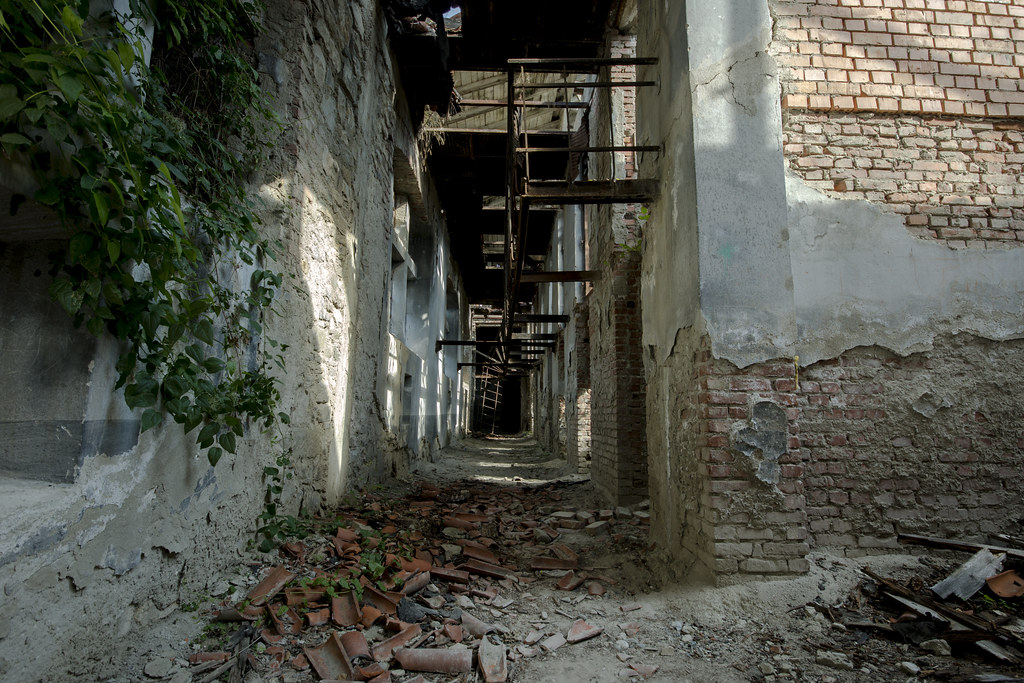 And so we come to the solitary confinement cells, block H. 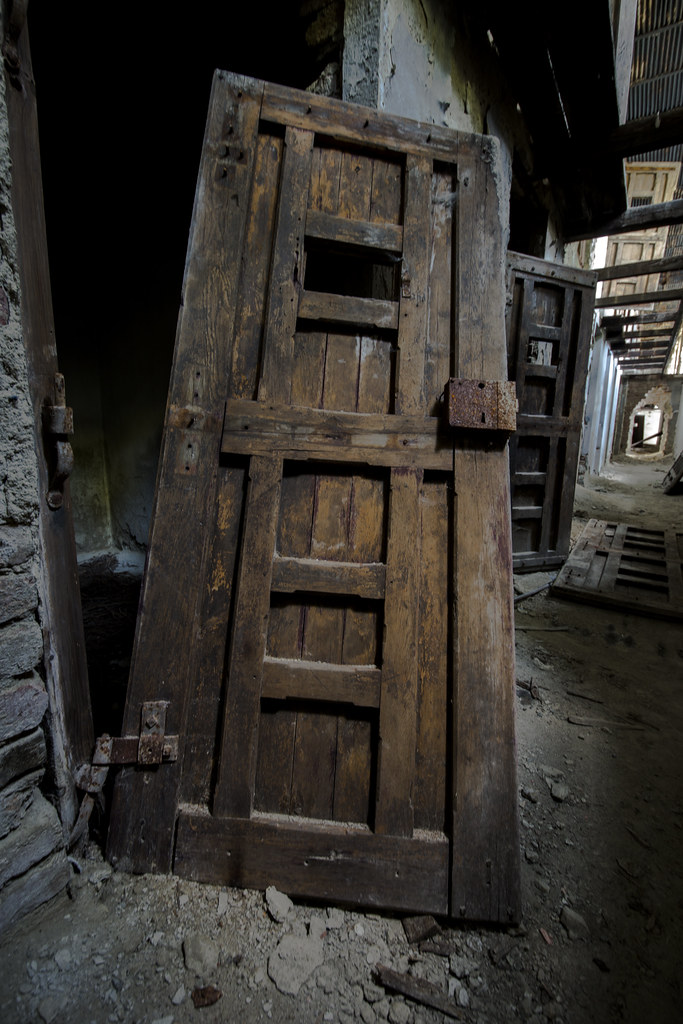 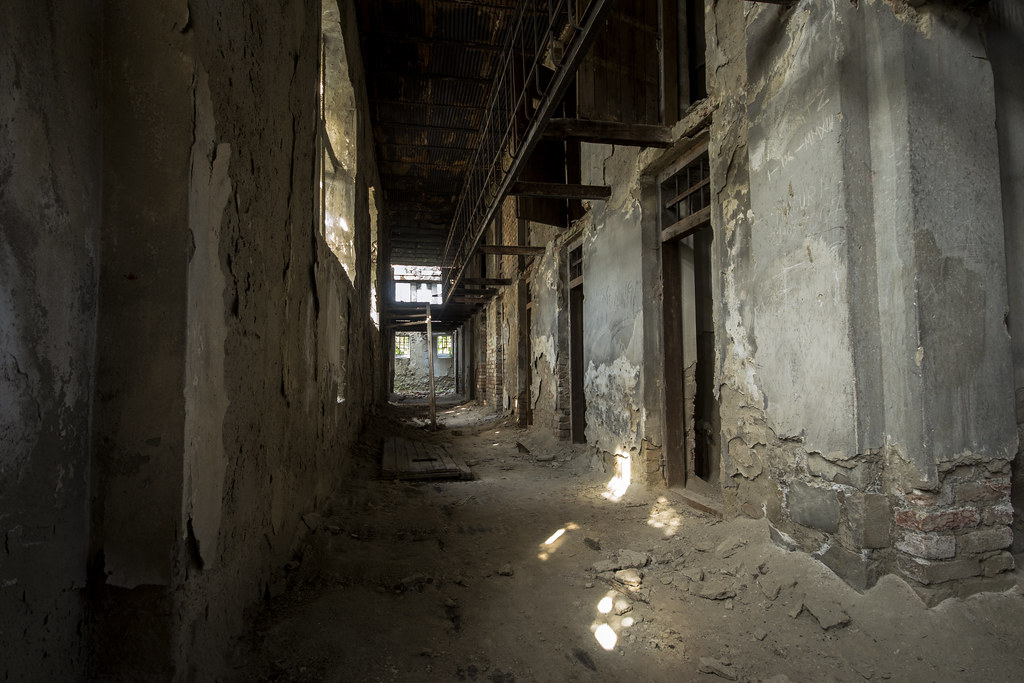 Look at the lower cells relative to the windows. Absolutely no light could shine in when the doors were closed, plus the floors were flooded. During winter without heating and with inmates living on rations barely possible to survive on, many died here. 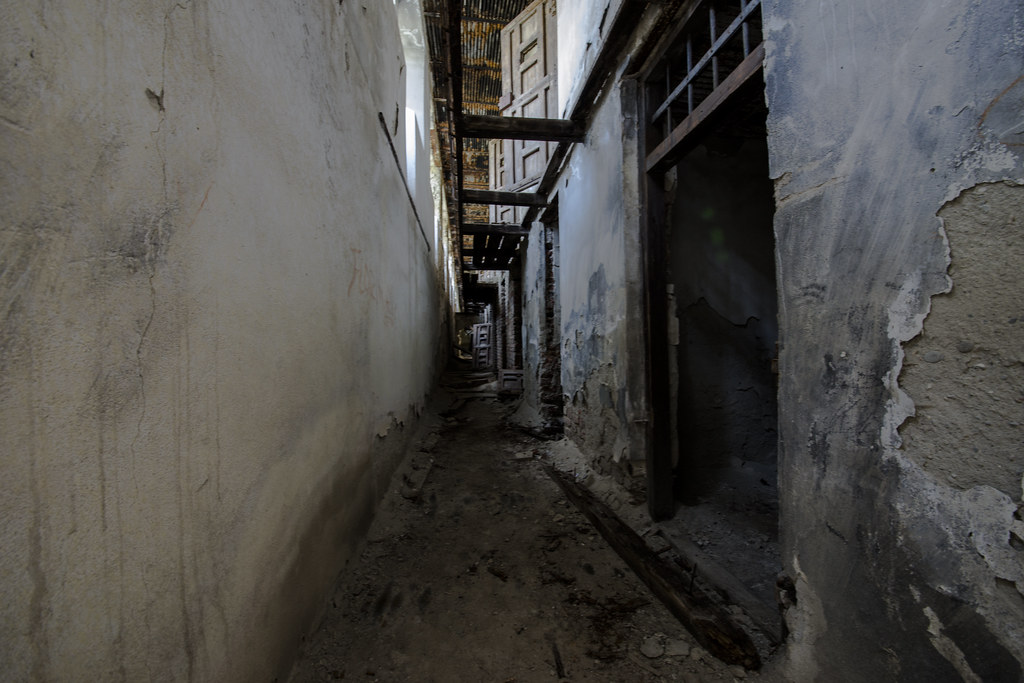 It's virtually impossible to capture the emotion invoked by architecture in a photo, but dear reader, how do you think you would feel if this was your cell? 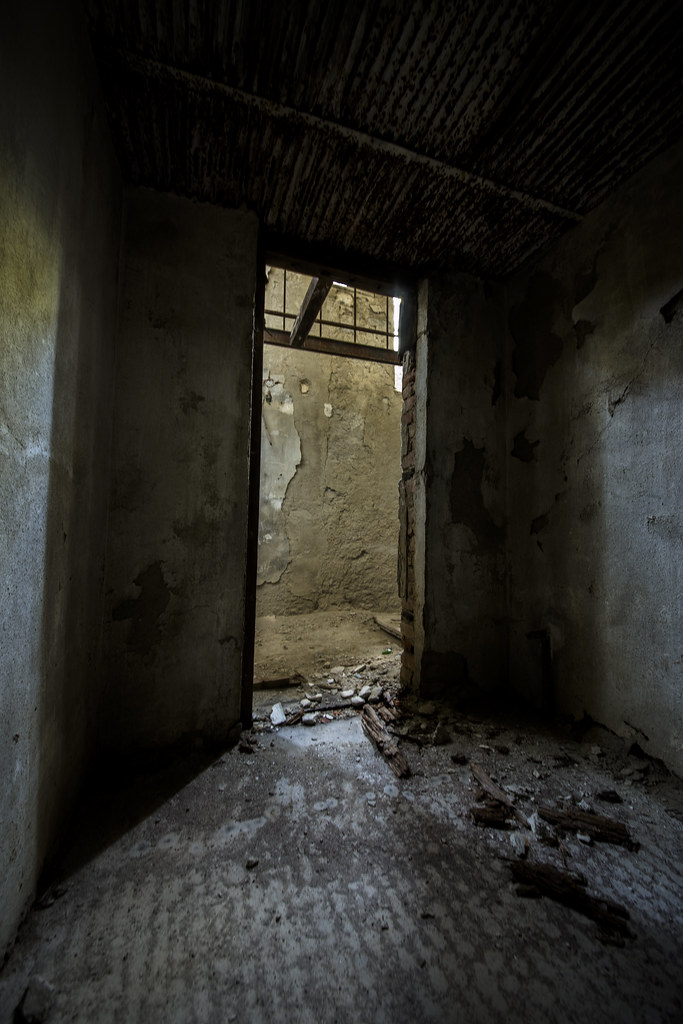 You wouldn't survive, would you? I wouldn't, that's for sure.

It was time to move onto the west cell blocks. Thus far I heard plenty of dogs barking, and possibly footsteps, but to be honest it was probably wind and dogs from afar. I was at leisure to roam undisturbed. 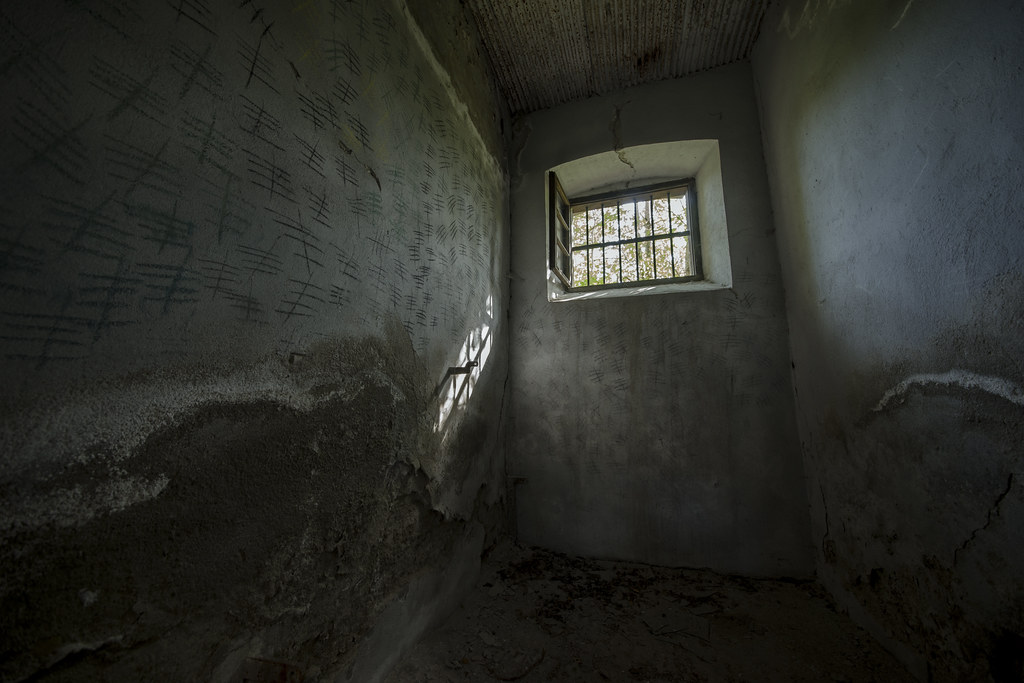 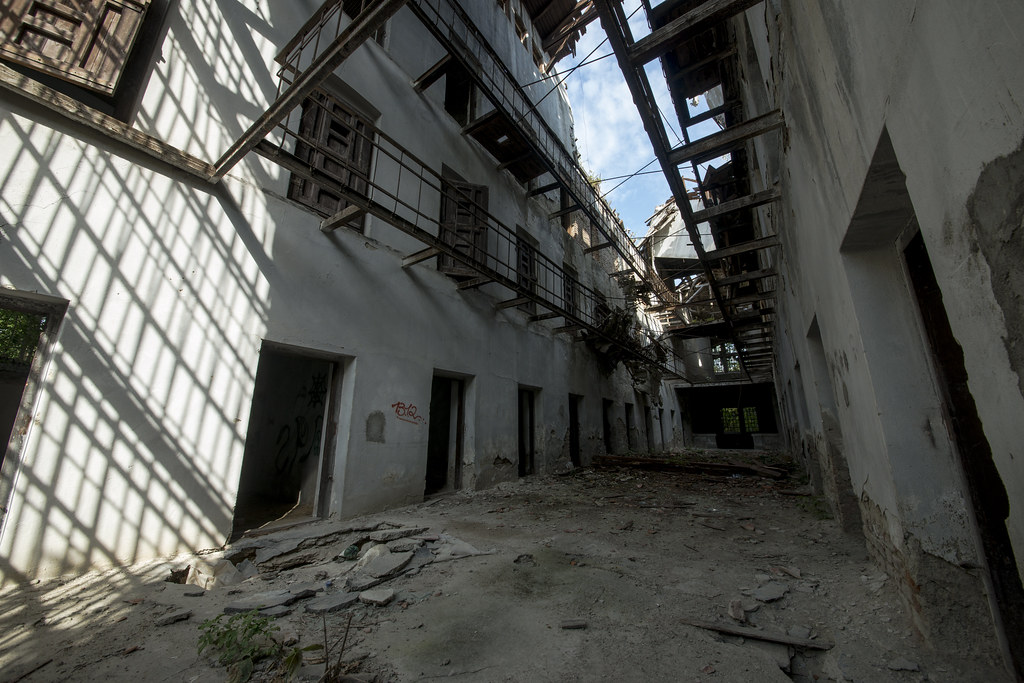 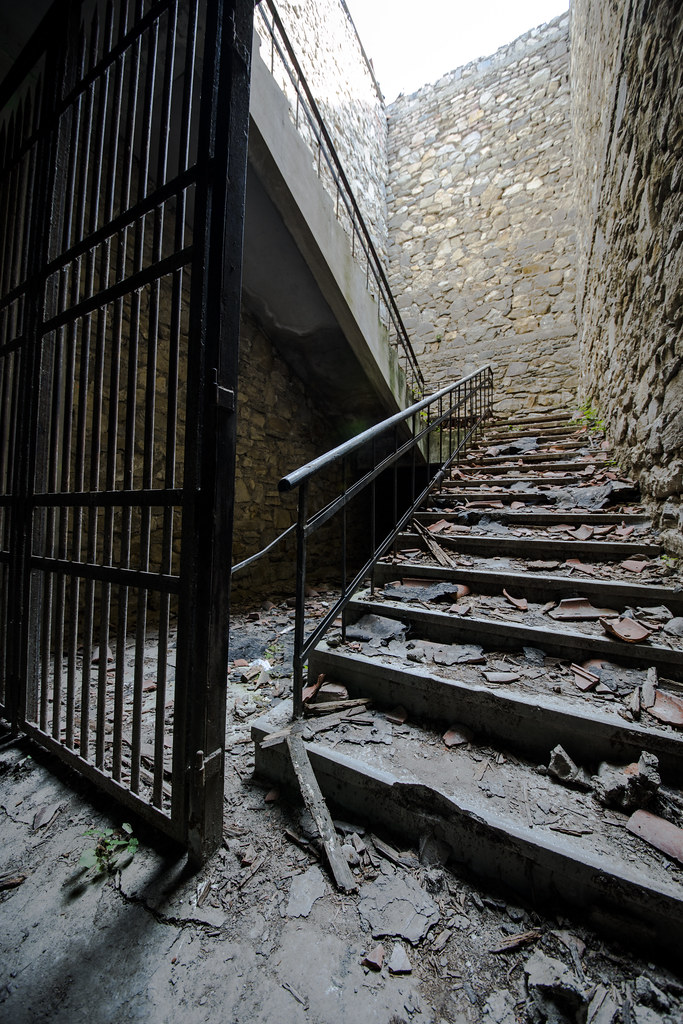 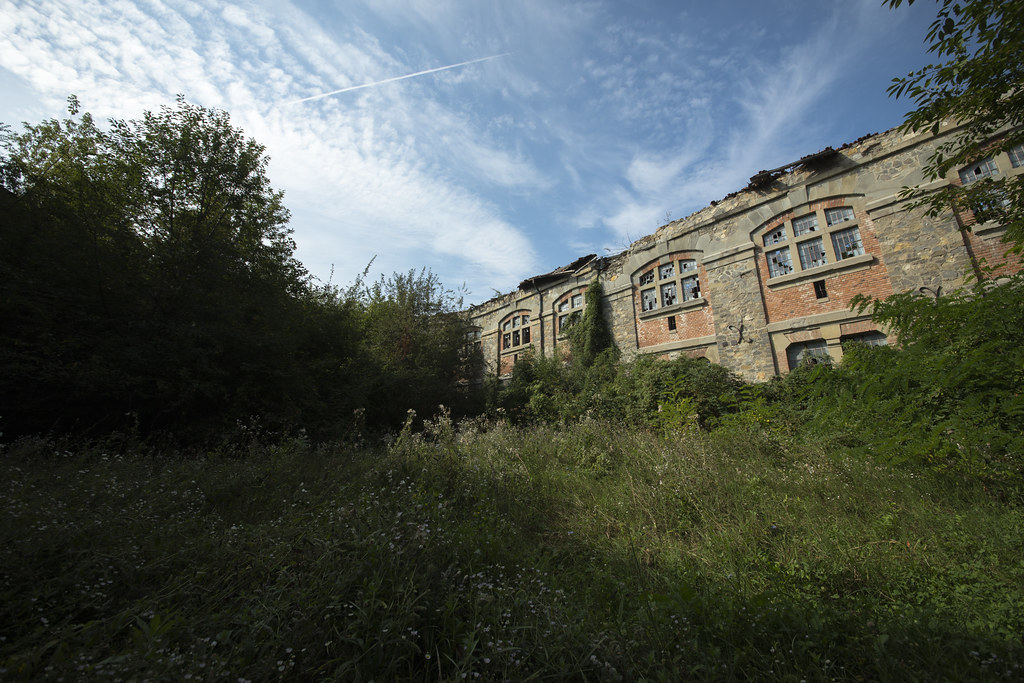 I headed back to the front building. It was clear this had been converted to a museum post-closure, but anything of value had long been plundered. All that remained was a smashed up diorama. 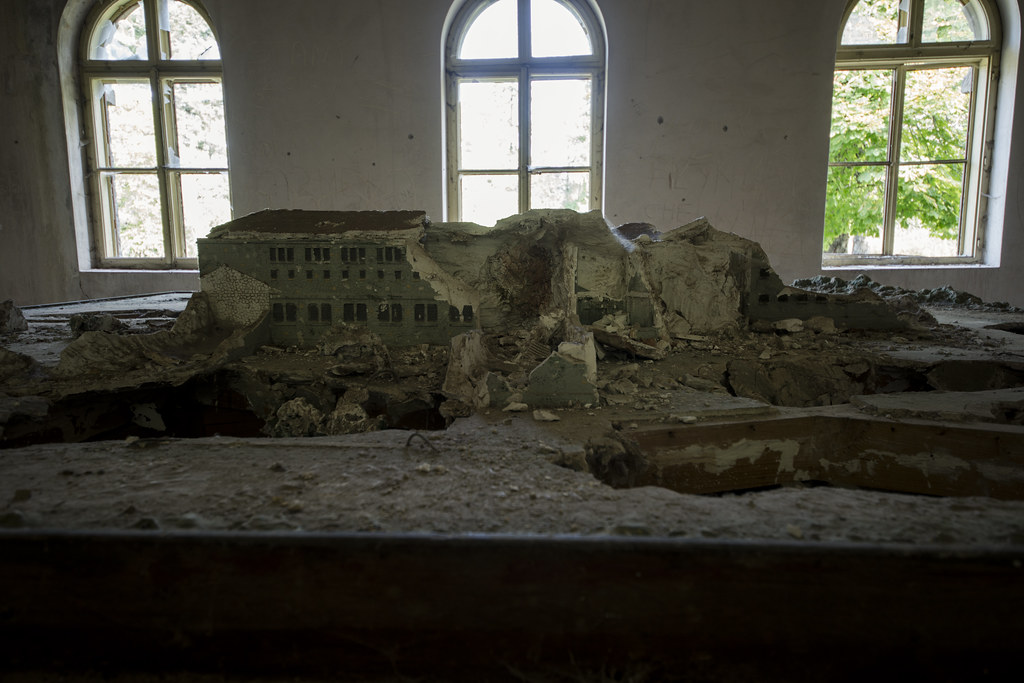 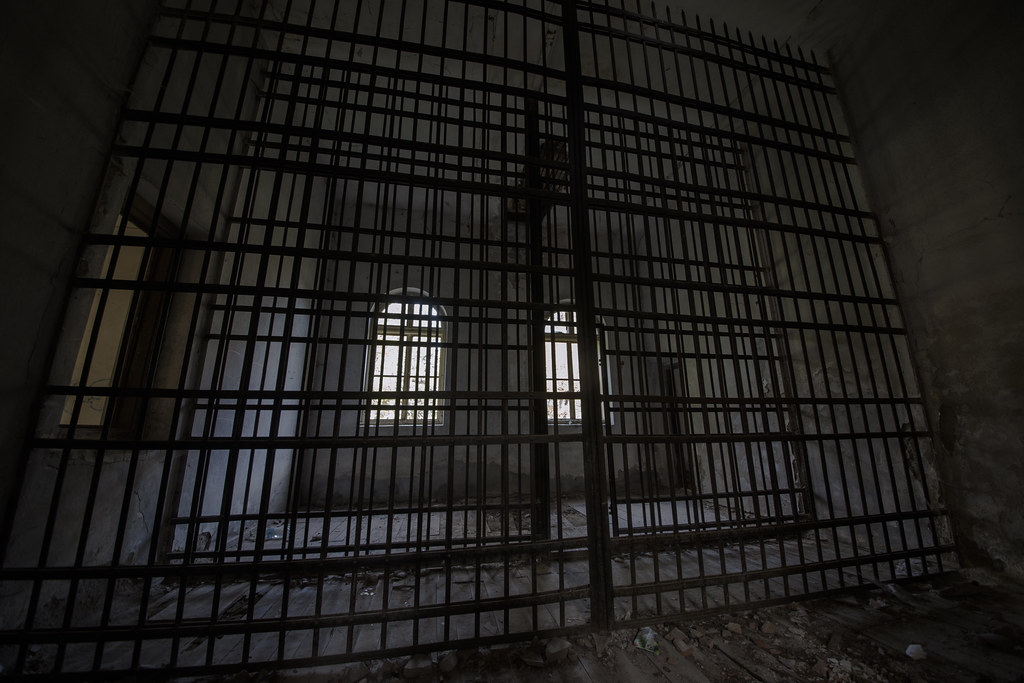 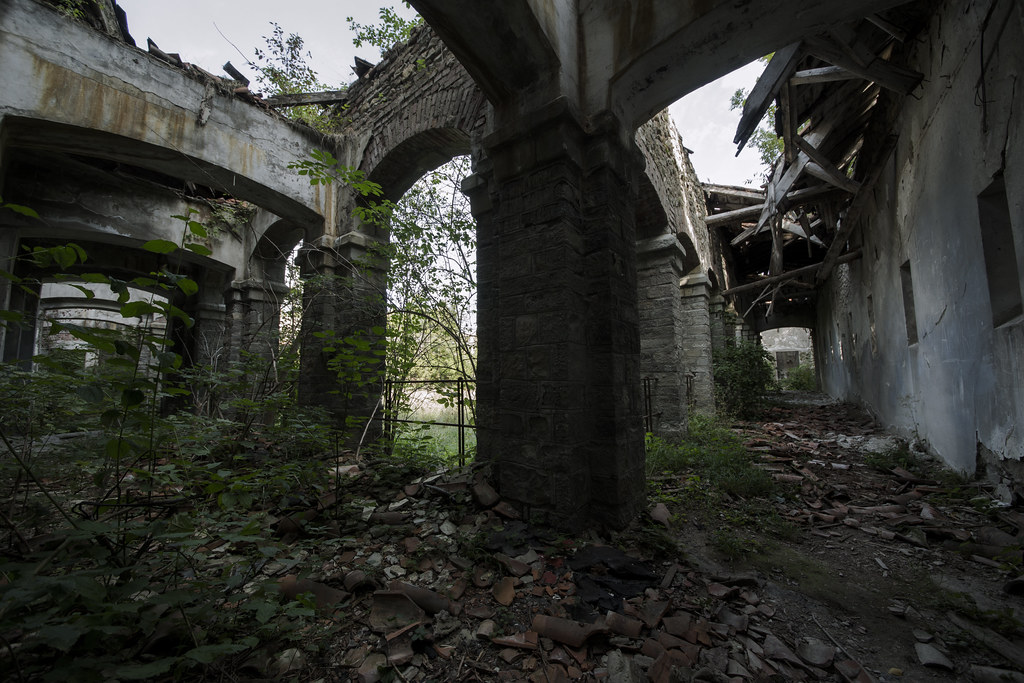 Theatre room. The projection room was bare, before you ask. 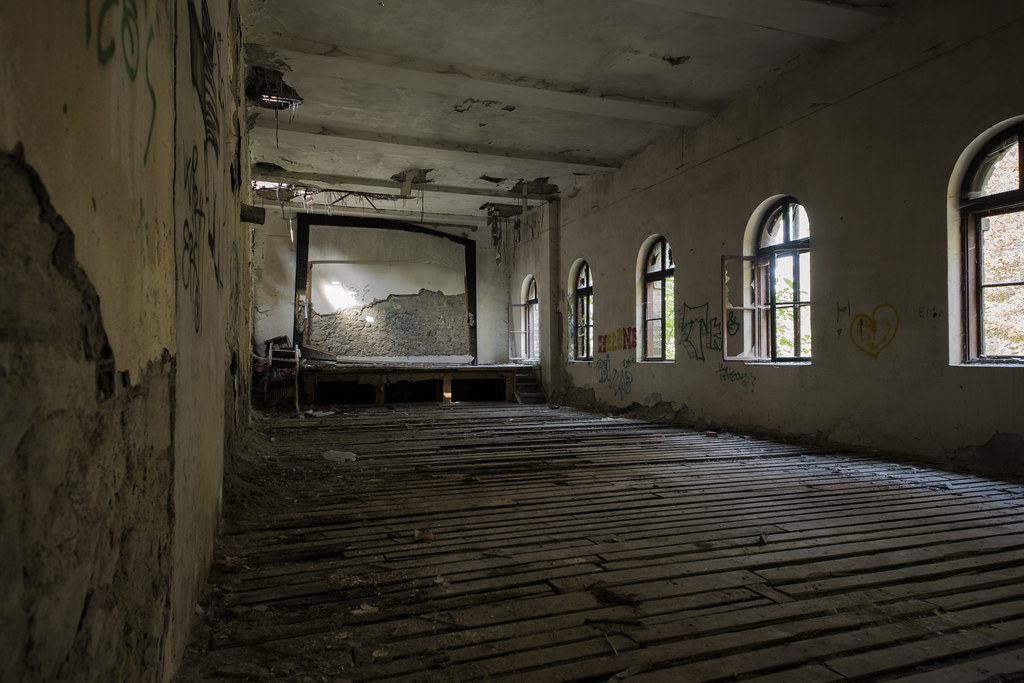 It was time to make my escape. Not wanting to push my luck, I didn't stop to take externals. I dashed out the way I came in, never seeing a single guard or dog in sight.

So there we have it, Doftana Prison. What does the future hold? Sadly not a great deal for the present moment. It's used for airsoft games sometimes, but that's it. It's a listed building too, but reuse would be difficult not just because of its ruinous condition, but also the history. On the final day of our tour, Arold and I visited Sighet Prison in Maramureș; this was very similar to Doftana inside, having been opened in 1897 (albeit exclusively, unlike Doftana) as a prison. In the 1950s when Doftana had already closed this was used to detain prisoners under the communist regime, and the conditions and treatments were hardly much better than what happened at Doftana. As I walked round, we were shown a map of the prisons used by the communist regime to imprison political prisoners. I wondered why Doftana wasn't listed, and now I know why; it's because this building is the the complete opposite. Sighet was a prison run by the communist regime, now preserved as a memorial to the victims of communism. Doftana was a prison museum during that time, and became a shrine to communism. Ultimately, if there's one thing I can conclude from visiting the two, it's that no matter how many crimes against humanity are committed, history seems to find a way to repeat itself. It just puts on a different guise each time. Doftana and Sighet are sides of the same dirty coin. Pessimistic, but look at the Conservative party in the UK; they want to revoke the human rights act, and too many people sit by and let it happen.

If you've got this far, thank you for reading.

That's a great report mate, enjoyed reading that and felt as if I was there so good job! Yhanks for sharing

Great to see, that you could visit it without getting caught.

I was there three years ago. A romanian friend told me he got caught there by a guard, an aggressive woman, and he had to pay a fine, converted about 100 Euro. A lot of money for Romanians.
But I wanted to try it anyway, and I was lucky. A donkey and a cow were in the courtyard, but no security and no dogs.
So I'm glad that you also were lucky.

The condition on your photos is slightly worse than during my visit, but this is not surprising after three years. Nevertheless, an interesting and worthwhile place.

That's a flipping top report, really enjoyed looking through that

Andy said:
I was there three years ago. A romanian friend told me he got caught there by a guard, an aggressive woman, and he had to pay a fine, converted about 100 Euro. A lot of money for Romanians.
Click to expand...

A bribe or a bona fide fine?

True_British_Metal said:
A bribe or a bona fide fine?
Click to expand...

I don't know. But as I know Romania, presumably bribery, I think. Or the money was illegally placed in someones pocket...

His visit was about one year before I was there.