Visiting Oblivion State always triggers in me a spirit of exploration that doesn't get many opportunities to take flight... As I go about my day-to-day routine however, I am inclined to keep a keen eye towards locations that might beckon me from beyond the beaten-path in the hopes of snatching some content to contribute to this forum.

In my neighborhood there exists a plot of land that has been left to the forces of nature and has turned into a patch of woods. In the summertime this forest-ette is nearly impenetrable due to the underbrush, but on a recent mild January afternoon - walking the dogs with my wife - we spied a structure standing in its midst.

From where we were standing - beneath the "vulture tree," beside the "red fox path" we could just make out a roof-line and caught a glimpse of a gable end. We decided to extend this outing and walk around to the opposite side of the woods and see if we might discover just what we had in the way of abandoned structures right under our noses.

Although the building was hemmed-in by many small trees I could see a way of passage that would not be so easily found during greener months. I was without my camera but after my wife assured me she had her phone I told her I was "going in" to see if this was worth further exploration. Thanks to the lovely lady I was able to document this reconnoiter.

As it turned out, this was nothing more than a trashed single room garage structure. The service entrance was standing wide open and although the door was equipped with a padlock hasp there was no lock - The double bay door was 75% boarded up, with a gaping hole that would have made a padlock nothing but a joke. The interior was dry-walled and the caved-in ceiling panels suggested perhaps all the trash strewn about the floor may have entered the space from the attic - "pinata style."

So here I've made the most of the imagery to give you the gist of it. I can't imaging going back with a tripod and proper camera, but not ruling out metal detector... 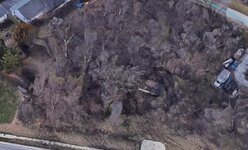 In The Summertime (Google Street View 2008) 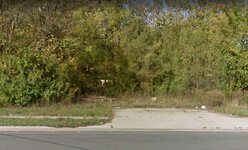 Opposite Side - Summertime (Google Street View 2008) 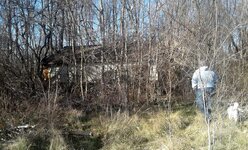 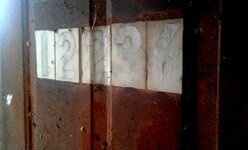 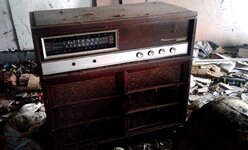 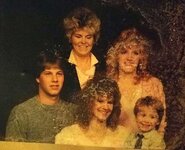 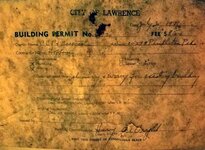 Hm, unfortunately really a mess inside. Didn't you take a detail shot of the family photo?

Yeah, was not sure I should post it, but since you mention it, I'll do an edit...

That's cool, the old photos are fascinating, more so as we will never know who they are.