I ve past this house for years.always had a car in drive way..then months ago no more car...i went to take a look.....the back dor had a latch i opened the latch and the whole door came off..big heavy door almost crushed me...well im in..i thought 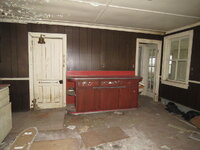 The door to the left lead to the basement..it was sealed tight...got a feelng it was flooded

this is the olderist calander still hanging ive seen..odd its the same month 47 years later

at the top of the stairs i found this..gaping hole a long drop into the basement

i built a little bridge over it

this must be the master of the house

he musta been a professor 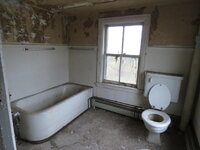 now i gotta figure out getting down over the hole.......I only got a female voice and it was outside...saying something...something..talks to you

I like the fireplace with the green tiles and the ornate rusty gold flap.