I had spent some time at Krakow with a lovely girl who appeared to still live with her ex-boyfriend. We decided to go on urban exploration together, except right before we went for dinner she got a call from that particular ex-boyfriend that he would kill himself if she would not return home. So I ended up doing another exploration solo, which is why the lighting of the photos taken at night are of low quality. I am sorry for that.

For this location I had to go on a hill that looked over the city of Krakow. This hill is famous for youngsters to meet up and have a drink. While standing on the hill I overlooked some sort of forest / swamp area in which lights where coming from. These lights were shining onto one of the objects of the quarry. From then on I knew I was at the right location, but I had no idea how to access the path towards this quarry. Google told me I had to go down a path passing a graveyard, and then walk through the swamp like area straight towards the quarry.

I found the path, but once I was down the hill at the swamp I had no idea where to go anymore. After wandering for an hour I was about to give up, untill I shin my flashlight higher and straight upon one of the objects of the quarry. Finally I was there.

This place was by far the most terrifying due to the poor state of the construction. One of the elements of the quarry was built against the wall of a mountain, reaching up to 15m of height. The iron used for the building was crusty, and had many holes in it as well. After climbing upon this building every step felt like it could have been my last one. Fortunatly nothing broke, and I got back out of the swamp at one piece.

I went back the morning after, to make some better photos at daylight.

I hope you enjoy. 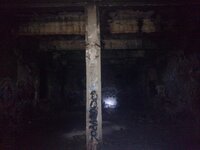 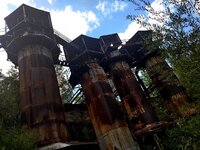 A bit strange introduction. But I don't want to judge the behavior the woman and her ex-boyfriend...
After all, this is about the photos and your exploration. And I like them.

Definitely haven't heard a report begin like that before ?. But nonetheless it looks like an interesting place from the day-time shots