As part of our 35 man tour in April this year, one of the early morning stops on our first day was at this village on the outskirts of the powerplant and within the exclusion zone.

The Chernobyl contamination was divided into four exclusion zones based on radiation amounts. The Chernobyl Exclusion Zone with highest contamination is officially uninhabited. In truth, over 2,000 elderly villagers illegally resettled their homes and farms inside the Zone. Today nearly 400 remain. More than 3,000 workers manage the Zone, living in Chernobyl town during 4-day and 15-day shifts. Another 3,800 personnel commute daily to work at the Chernobyl plant from their new home in Slavutych.

After the accident in 1986, over 160 towns and villages nearby were evacuated. Many were demolished, some were simply abandoned. This village that is beyond the main zone of exclusion where radiation fell but evacuation was not mandatory. In Ukraine, this included over two thousand villages. The accident and indirect consequences continue to affect these residents physically, economically, socially and psychologically.

The questions remain - Why do people stay? No alternatives or a sense of duty or because this is their home?

On wandering around in the time we had, there were a few villagers who came out to see what was going on as someone attempted to access their home. Just goes to show that people are resilient and decide to plod on, regardless of the situation. One had cattle and crops in the garden.

Some of the photos. 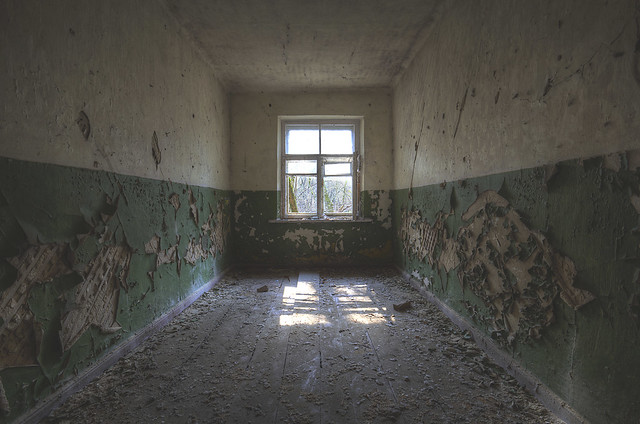 ​
Thanks for looking in.

Nice to see your slant n the place mate,was a really good trip out

Well captured and tragic in its own right .