Daresbury Hall is a former Georgian country house in the village of Daresbury, Cheshire, England.
It was built in 1759 for George Heron. the hall descended in the Heron family until 1850, when it became the property of Samuel Beckett Chadwick. By 1892 it had been acquired by Sir Gilbert Greenall, later Baron Daresbury.

During the Second World War, it was used as a military hospital and also by a charity, now known as Scope. It became semi-derelict after being bought by a millionaire who died before restoration could take place.
In April 2015, a huge cannabis farm containing six hundred plants with an estimated street value of 750.000 was discovered at the estate.

In 2016 there were plans to partly demolish and convert the house but in June of that year
the empty building was badly damaged by fire.

Unfortunately, during our visit, we were asked to leave the sight by security via a speaker system on the estate. We did, however, stick around for 20 mins until it went off again, to be honest,

I'm not sure whether the system is automated and linked to motion sensors.

There is a lot of cameras on the sight too as shown the last pic.

Any way we couldn't enter the property as it is completely sealed now with boards on all windows and doors etc except for a stable and a few dilapidated sheds.

We did the best we could in the situation we had.

Thanks for any feedback. 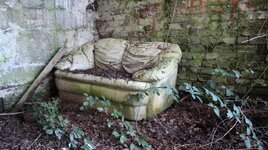 Unfortunately in a sad state.

Yeah, its a shame guys was a nice place at one point!

Must've been nice in it's day! Good to see some picture reports from you too mate, cheers!

Yeah, I've seen some before shots of the place m8 it was pretty smart, to say the least man, I don't think they're gonna save any of it, to be honest, and thanks for the feedback dude!