Earls Court Exhibition Centre is a closed exhibition, conference and events venue in London that originally opened in 1887 and was rebuilt in 1937 in its most recent art deco style exterior. It is located in Earls Court within the Royal Borough of Kensington and Chelsea and was the largest such venue within central London. The founder was John R. Whitley and the first exhibition included performances by Buffalo Bill Cody as part of the 'American Exhibition'. This was followed by 'Four National Exhibitions', the title of C. Lowe's 1892 book about Earls Court and its founder.

Earls Court is widely known for serving as London's premier exhibition hall for many decades, hosting the Royal Tournament and Motor Show, Ideal Home Show, the Brit Awards (until 2010) and a number of other notable events and concerts. It was also used as one of the venues for both the 1948 and 2012 Olympic Games. It was served by two London Underground stations: Earl's Court and West Brompton, opposite the entrances on Warwick Road and Old Brompton Rd respectively.

In 2013 controversial plans to demolish Earls Court were approved in order to make way for a new residential and retail estate on the site, which is expected to be completed in 2033. Demolition work began on the site in December 2014.

With so many landmark sites in London it's simply a case of waiting for the next one to reach the end of it's life cycle. Earls Court exhibition centre's fate has been doomed for a while now, the hoarding went up last year and we'd nearly forgotten all about it until Maniac mentioned it in a conversation recently. Probably just big empty rooms with nothing in them we said to each other, but then as the conversation continued we started to wonder actually what might be lurking underneath the place and whether or not we might be able to access the roof. We made it a priority and got ourselves down there pronto with ojay and sirjonnyp. It's an absolute beast of a site (check out the aerial view later) and we weren't wrong in thinking there might be more to it. It took two long visits to get around the majority of it and I'm sure we still missed some bits. The main arena was like a scene from the apocalypse, rain falling from above and twisted metal railings strewn across the place. The labyrinth of service tunnels were hiding some epic plant and boiler rooms amongst other things. The roof contained the most gigantic gantry I've ever seen which enabled you to climb to the very top of the structure, happy days! A really satisfying explore this one and perhaps a last glimpse of one of London's most famous venues before it disappears off the planet. 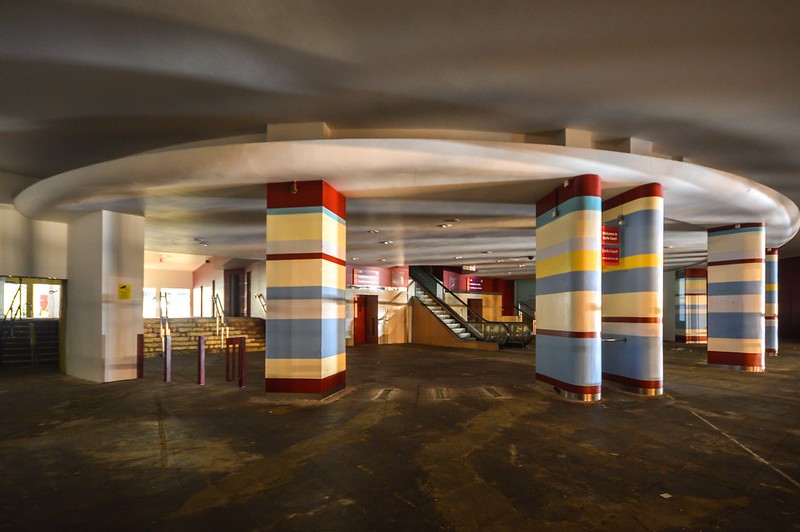 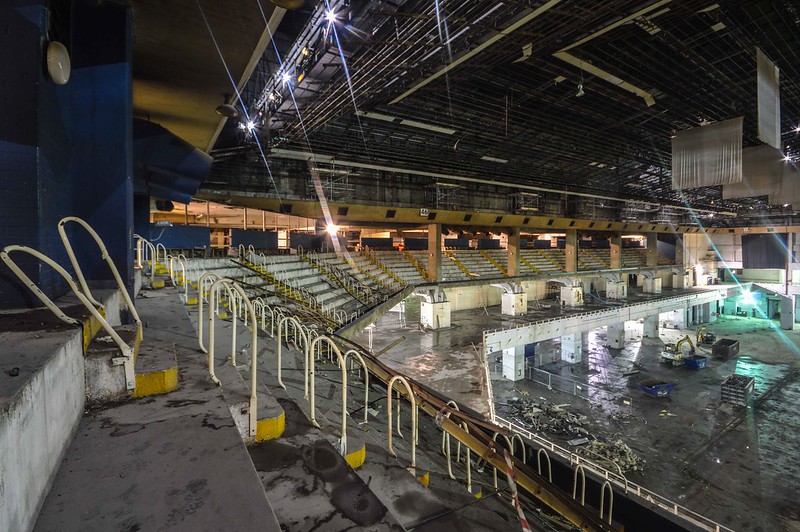 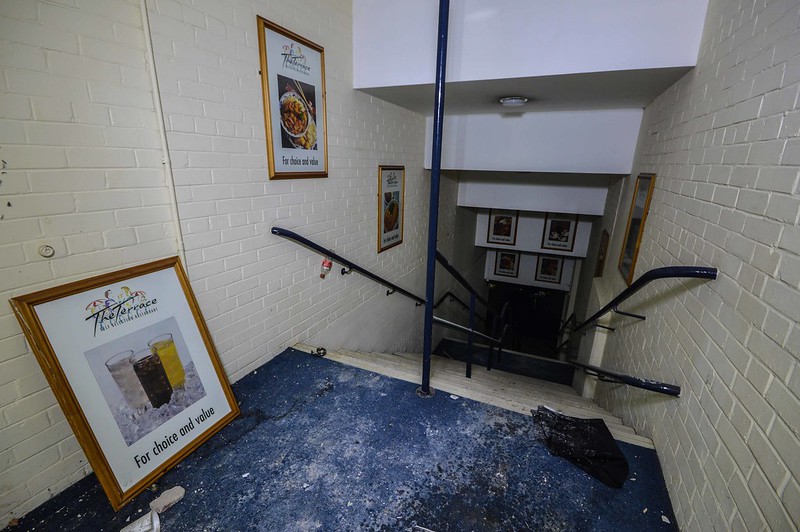 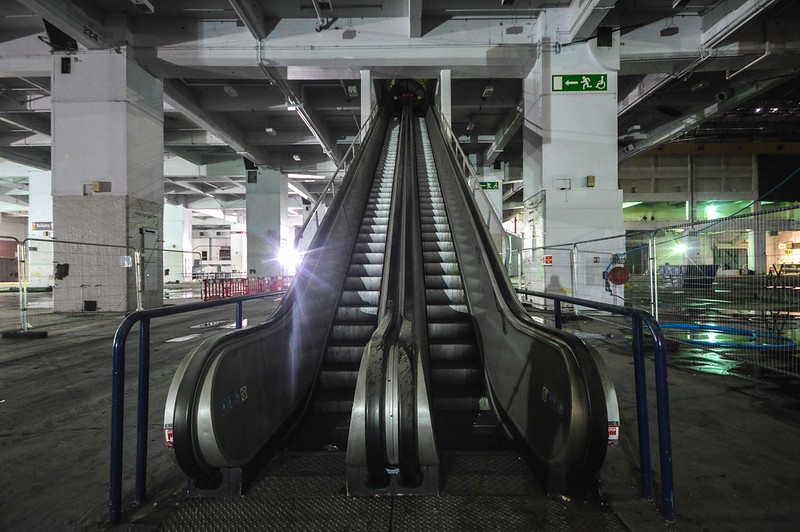 8. Some machines and bits around the perimeter of the arena 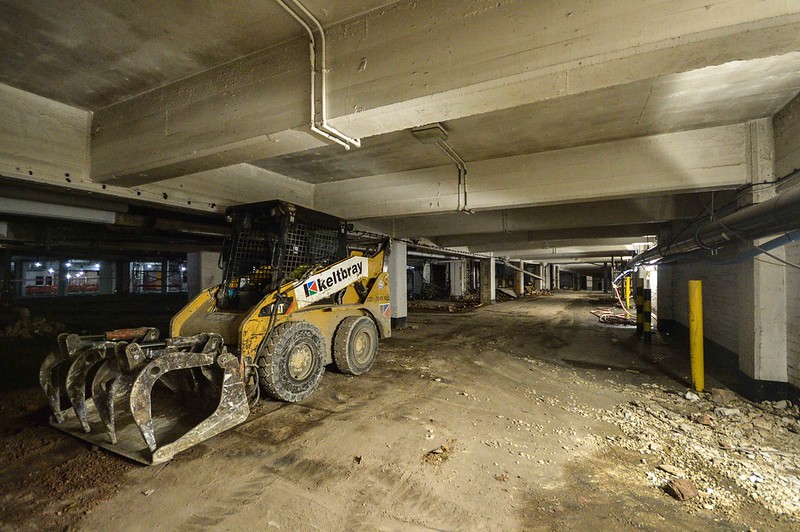 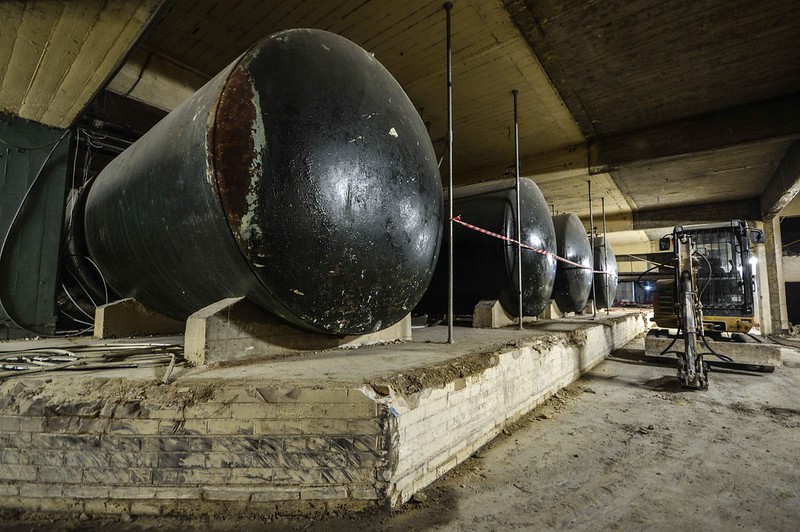 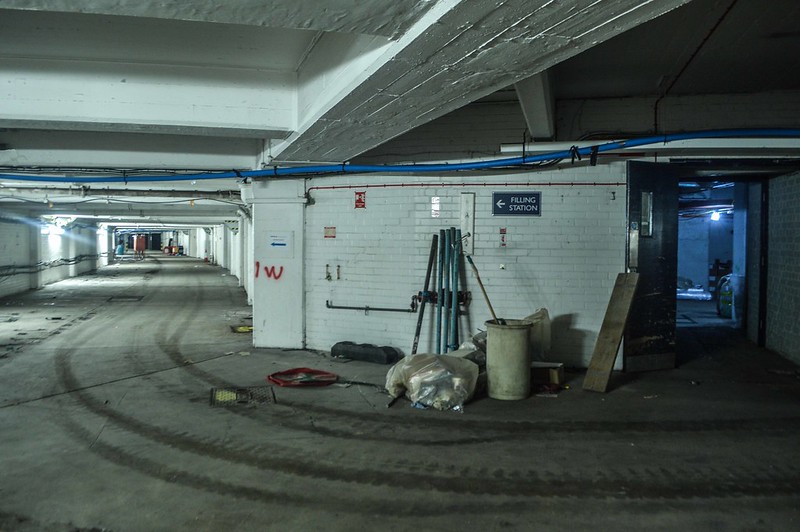 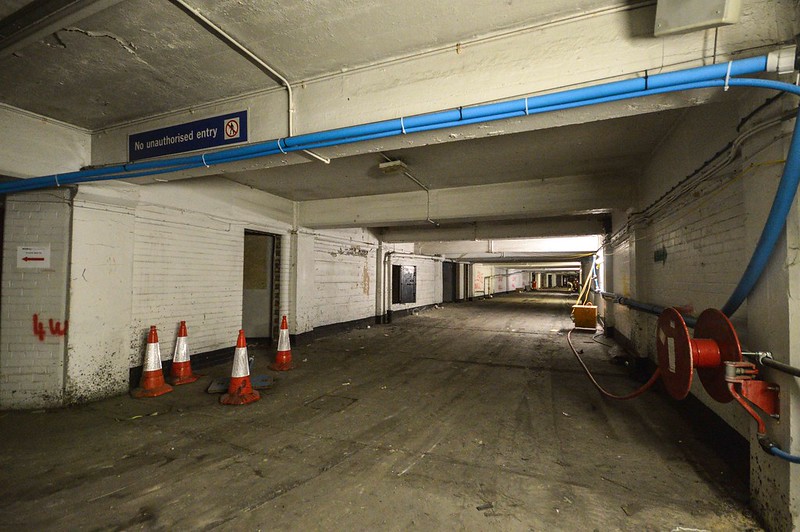 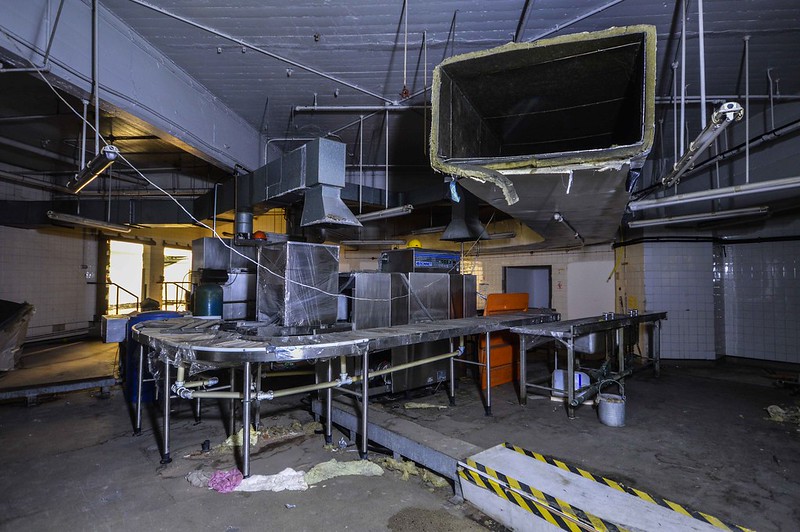 15. There were 7 of these huge boiler tanks (I'm guessing that's what they are....), you can just about see through the door how long they are 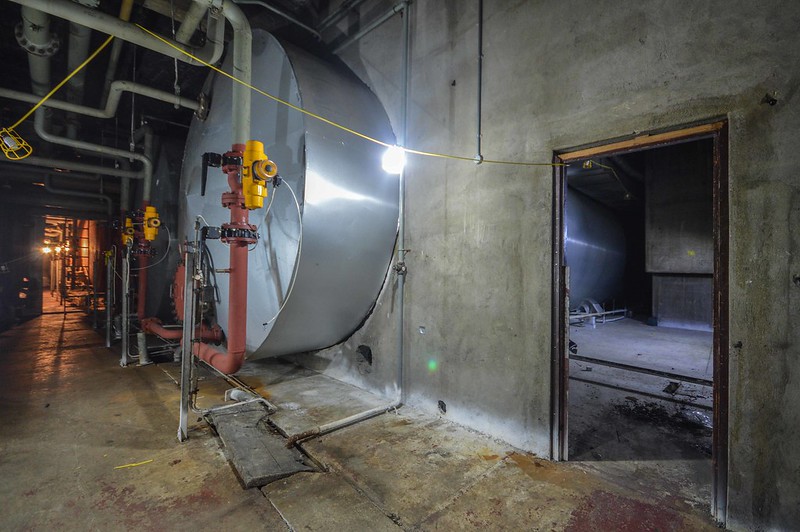 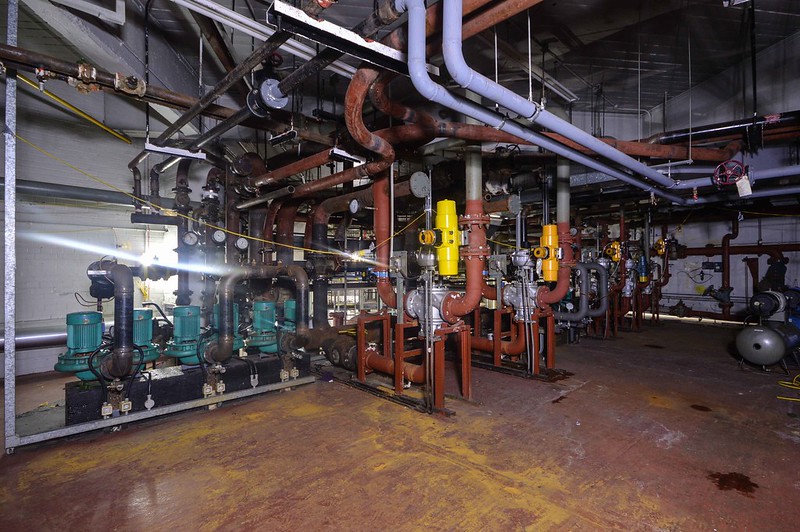 18. Found this little control panel in there 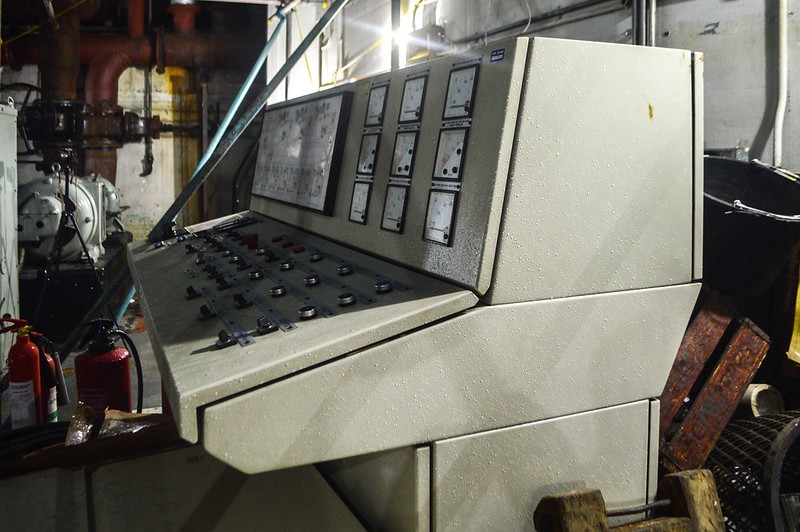 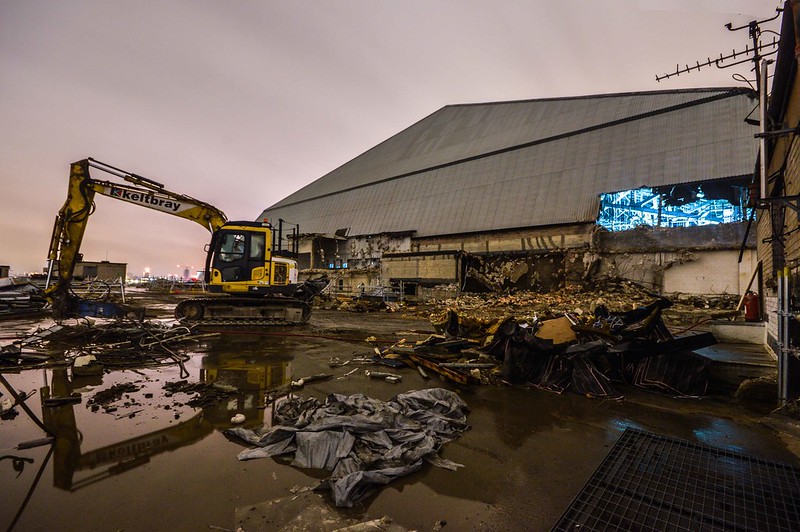 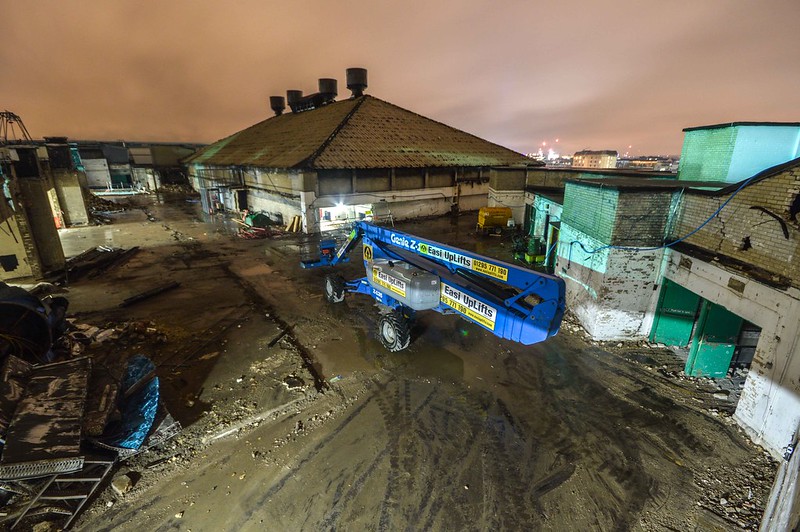 21. Up on the gantry, I used incandescent white balance on this shot 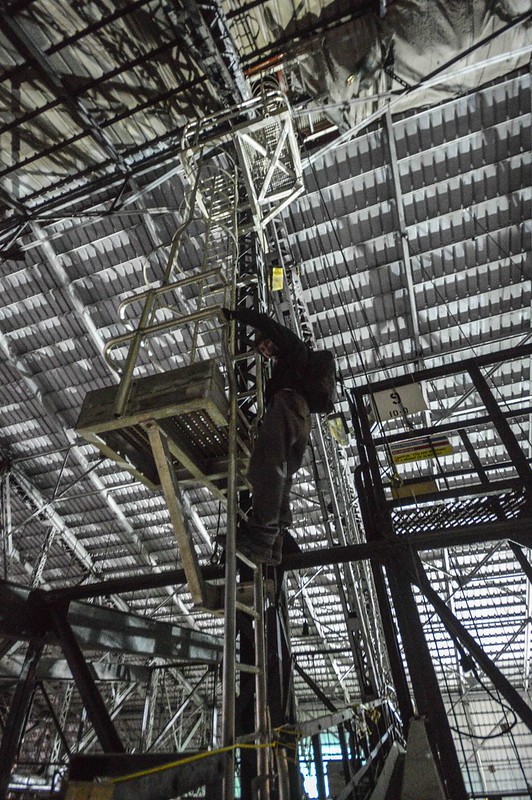 25. Sketchy hand held shot looking down with the arena visible below 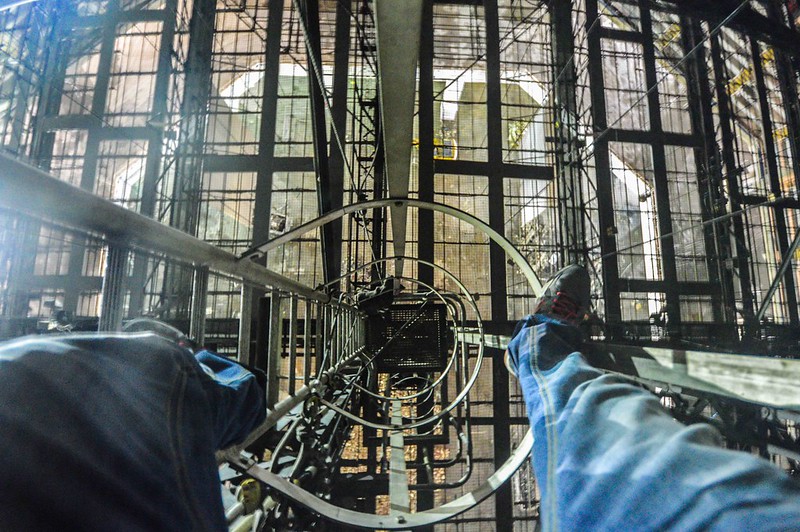 26. Taking a break at the very top of the roof inside one of the little black areas seen on the photo below 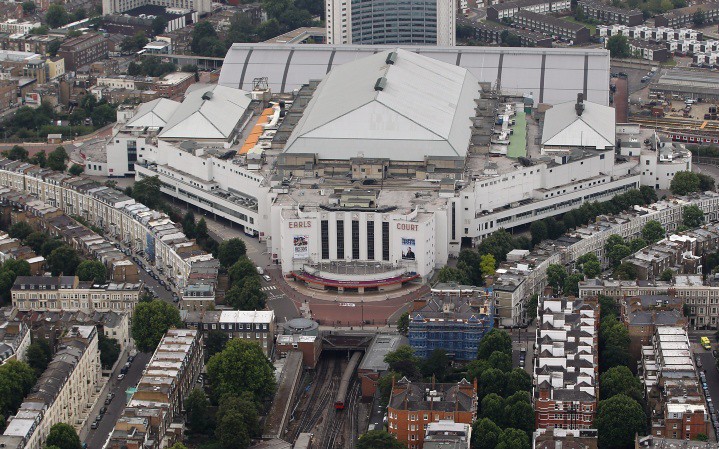 In response to the drastic need to increase exhibition space, Earls Court Two was constructed at a cost of Â£100 million. The barrel-roofed hall links with Earls Court One and the hall's 17,000 sq m floor is entirely column-free. The hall was opened by Princess Diana on 17 October 1991 for the Motorfair.

Little work has been done on this side yet, not as interesting as the main arena but still well worth a look. Climbing up the sign was comedy gold! 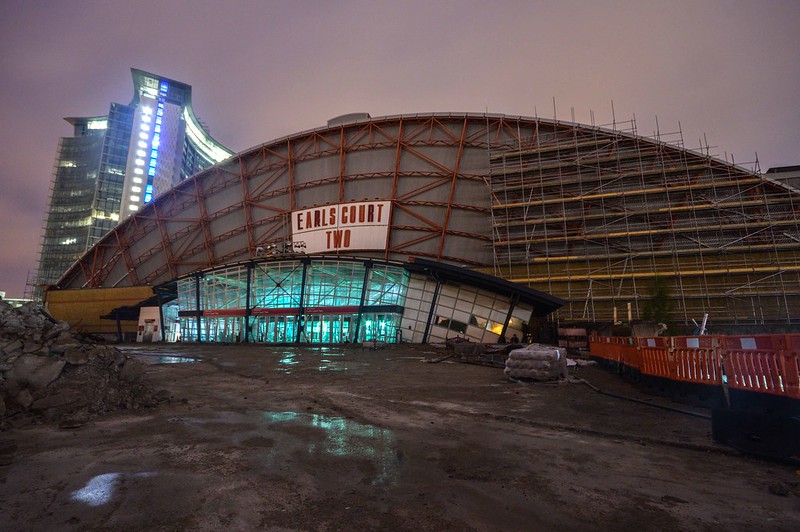 29. The scaff didn't go quite high enough to reach the roof 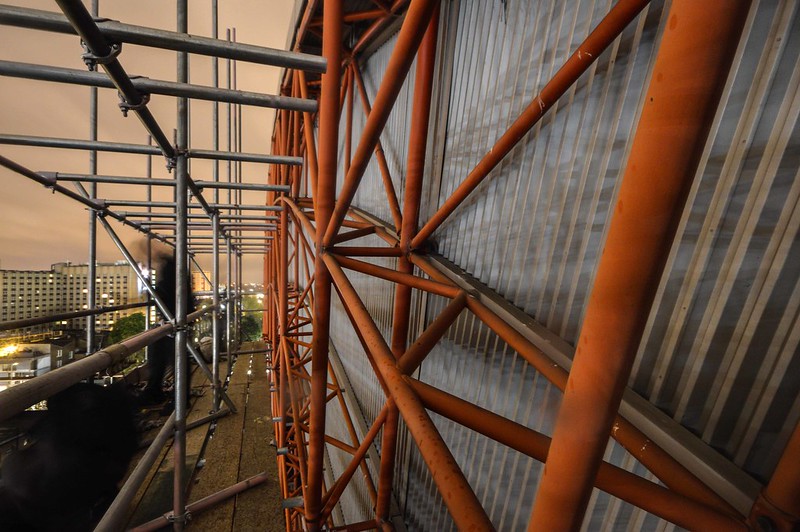 30. This was an epic moment 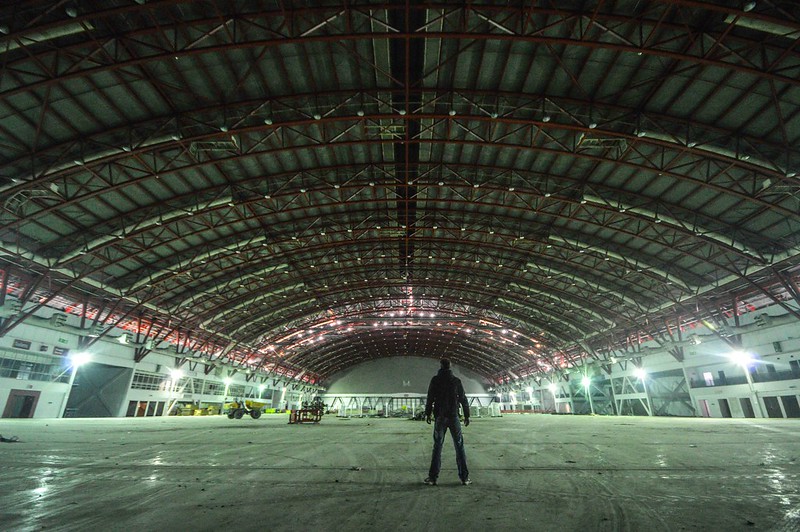 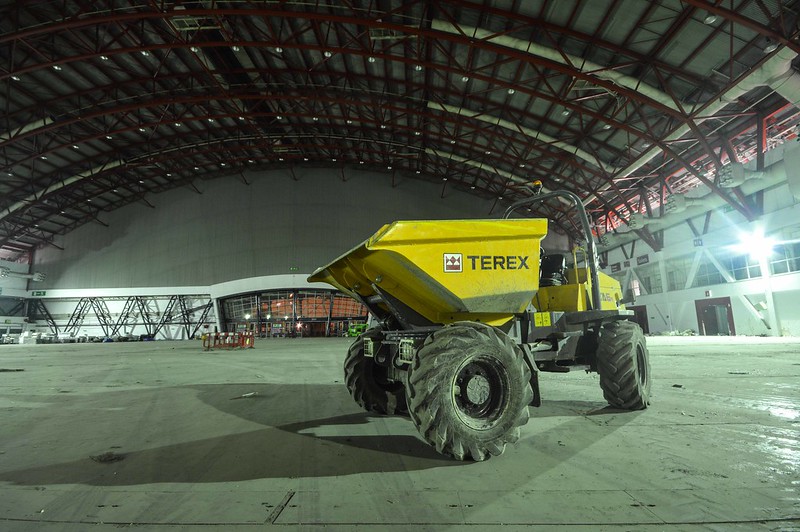 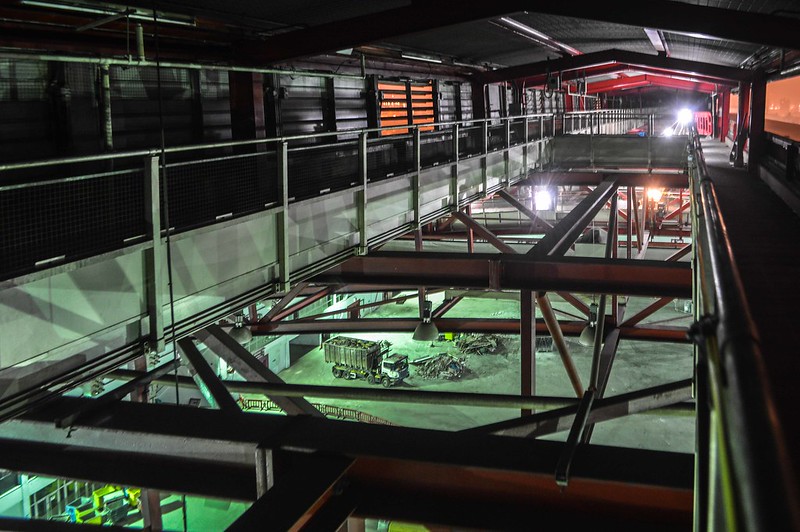 38. A fitting sign to send us on our way

Jesus they have really gone to town on the place and seams so odd to see it like that.

One that was always so dressed for the public events yet always had so much more behind the scenes and a great glimps of what remains.

Looks awesome although I'm a little disappointed there are no digger selfies in there. It looks too tempting!

Love the empty hall shot and the roof ones! Good work!!

Superb! I saw Pink Floyd in that arena. The 1994 Division Bell Tour!

Nice one was a fun night doing this, but I need to go back and cover the parts I didn't see as they're probably the most interesting bits!

Cheers guys it was a bloody fun one this one

Thought it was in NP for some reason sorry Damo I would have shared it
Click to expand...

So did I and after I nearly shared a NP one of his the other day he would have killed me.

Lol I don't kill people, I just cause life threatening injuries Decided there wasn't a lot of point making it NP, it's disappearing by the day already anyway....

Lol I don't kill people, I just cause life threatening injuries Decided there wasn't a lot of point making it NP, it's disappearing by the day already anyway....
Click to expand...

Ha! At least I realised before posting.

i glanced through this the other nigt on my mobile and of course small screen bad eyes didnt make out much of it..glad ive had a proper look now im on the pc..fookinh lovely stuff mate them service tunnels are lovely as is a lot of it

Wow, special one that. Seems a world away when I saw Metallica there.

Bloody hell! That is somewhat spectacular! When I saw those escalator shots I half expected a George A. Romero montage in the next few photos, lol. That roofing gantry is some of the most spectacularly symmetrical urbex sights I've ever seen!

That's one HUGE! place, some great shots your have taken!

What's the security like? I went there many times over the years for exhibitions. Would love to have a final visit to the good old place.

I used to work here until we were evicted in December. Some many happy times here over the years. This is absolutely criminal what they are doing to the place, it is a London icon and is world famous. Complete vandalism fuelled by corporate greed and corruption by the Tory establishment. So many have lost their jobs, jobs they loved at EC and down below on Lilly Bridge Depot, local businesses haveost trade and if they have their way they will make many more lose their homes now on West Ken and Gibbs Green. Only capco land awaits now.. The building is an empty shell now. So sad. This was OUR BUILDING!

"sir" Terry Farrel (I don't even give him a capital S), TfL EC&amp;O, Capco, Boris the bulldozer &amp; co, hang your heads in shame...

Anyway, some EPIC adventuring here, I don't know how the hell you guys managed to get onto the bloody roof though! But some great (albeit tragic) pics. Massive respect. I thought I'd join up and have a look round the rest of your fantastic site. Keep the good work coming guys and girls.