Just one of those places i had to go and see for myself...

HISTORY: The Second Birmingham Improvement Act of 1861 cleared the way for the redevelopment of Colmore Row. The Great Western Railway had built Snow Hill Station in 1853, close by, and this was rebuilt in 1870. Leases on the Georgian properties in Colmore Row began to fall in by the 1860s and demolition started in 1870. A new road, Barwick Street, behind Colmore Row, was constructed in the 1870s with frontages which were mostly of brick and stone. Several separate plots of land were acquired to create the site of the current hotel which takes up the greater part of the block bounded by Colmore Row, Barwick Street, Church Street and Livery Street. Isaac Horton and Thomson Plevins, who was to become his architect, were both active in acquiring land and developing it in line with the improvements in the 1861 Act. The Colmore Row frontage was theirs by 1875, although the right hand portion came fully into their hands a little later. Thomson Plevins was architect and he issued three separate contracts for the building of the Colmore Row front and work started with the pavilion at the corner with Church Street. Next it extended to the right as far as the central pavilion. Lastly the balancing range and corner pavilion completed the symmetrical composition. The hotel opened in 1879 and a contemporary advertisement referred to "Commercial rooms, stock rooms and every convenience for commercial men... large rooms for dinners, weddings, breakfasts, meetings, arbitrations etc." There were 100 bedrooms, with 60 more unfinished at the time of opening, a restaurant with separate entrance in Church Street and 2 coffee rooms. The inclusion of Stock Rooms, where businessmen could demonstrate their products to each other, shows that the hotel was directed towards this market. Placed near to Snow Hill Station, the hotel aimed to attract commercial visitors from out of town. In the early 1880s the corner site on Church Street and Barwick Street was added to the hotel with a building of four storeys plus basement which was extended in 1894 by another 3 storeys. Also in the 1880s another large plot of land facing on to Barwick Street and Livery Street and turning the corner to connect with the Colmore Row facade was developed with a 5 storey block, called Great Western Buildings, of which a 4-bay section now survives on Barwick Street and is part of the hotel. In 1890, before the end of the lease the hotel appears to have failed and the building was handed back to the landlords. Hortons' Estates decided to re-order the interior of the Grand and newspaper reports spoke of Â£40,000 spent by the prominent Birmingham architects, Martin and Chamberlain. The Birmingham Daily Post recorded the hotel as "entirely reconstructed, decorated and furnished" and the Midland Counties Herald wrote that "although the external walls are retained, there is practically a new building on the old site, and all that remains of the old building is the facade on Colmore Row". The contractors were Barnsley and Son of Ryland Street North and the building was furnished and decorated by Norton and Co. of Corporation St. There was electric lighting to the public rooms and gas in the bedrooms. As well as the Stock Rooms and an arbitration suite there was a series of reception rooms called the Windsor Suite and a banqueting and ballroom. The grandest of all the reception rooms was built in 1894 when Martin and Chamberlain were asked to fill the remaining gap along the Barwick side of the site. They built a large new ballroom called the Grosvenor Room, together with a Drawing Room, arched internal colonnade and crush hall. The architects' drawings show that the ballroom was designed as a shell and the elaborate decoration was entrusted to decorators [perhaps Norton and Co. once more]. Five upper floors contained 75 new bedrooms. Other alterations at this time included 2 additional billiard rooms in the hotel basement. In the 1970s the architects Harper and Sperring undertook a modernisation of the interior and the exterior stone work on the Colmore Row and Church Street fronts was painted with a cement wash. The inclusion of rooms designed to appeal to businessmen was paralleled at the City Terminus Hotel, Cannon Street, London and the Caledonian Hotel, Glasgow. Amongst listed hotels in London, the Grosvenor, Buckingham Palace Road, the Russell, Russell Square are comparable in date and in their provision of grand public spaces, as is the former Midland Grand Hotel, Euston Road [grade I]and the Midland Hotel, Peter Street, Manchester [grade II*].

The Grand Hotel block forms one of the largest C19 buildings in central Birmingham. Within the overall urban context, and most particularly within its immediate neighbourhood, it makes a very positive and well-mannered contribution to the townscape. Placed in close proximity to James Archer's magnificent Church of St Philip [now the Cathedral], it achieves the difficult task of not dominating its smaller neighbour but still retaining individuality, most particularly by its distinctive skyline. The Barwick Street faÃ§ade of the block designed in 1894 by Martin and Chamberlain is a fine work by this noted practice and shows an assured and interesting handling of masses. Inside are some especially fine original interiors including the principal staircase and, most notably, the rich and impressive French style decoration of the Grosvenor Room, Grosvenor Drawing Room and Crush Room. Elsewhere there is evidence of the Stock Rooms, which were an essential part of the original commercial accent of the hotel, as well as the rare survival of the shop interior at the Anatomical Boot Co.,25 Colmore Row. The special qualities of this building merit its listing at II*. 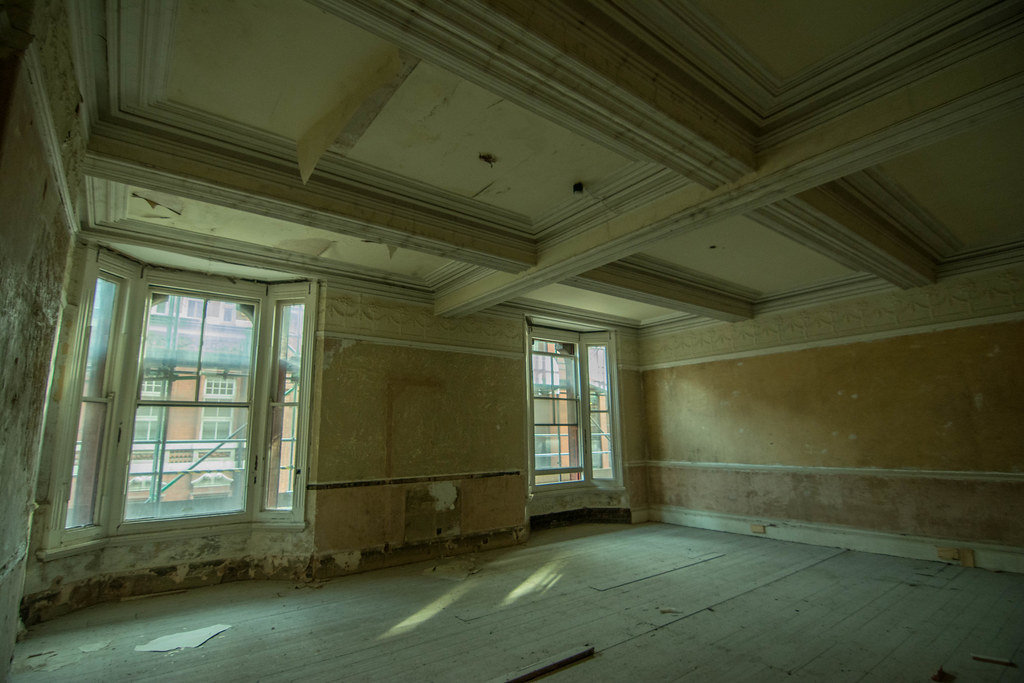 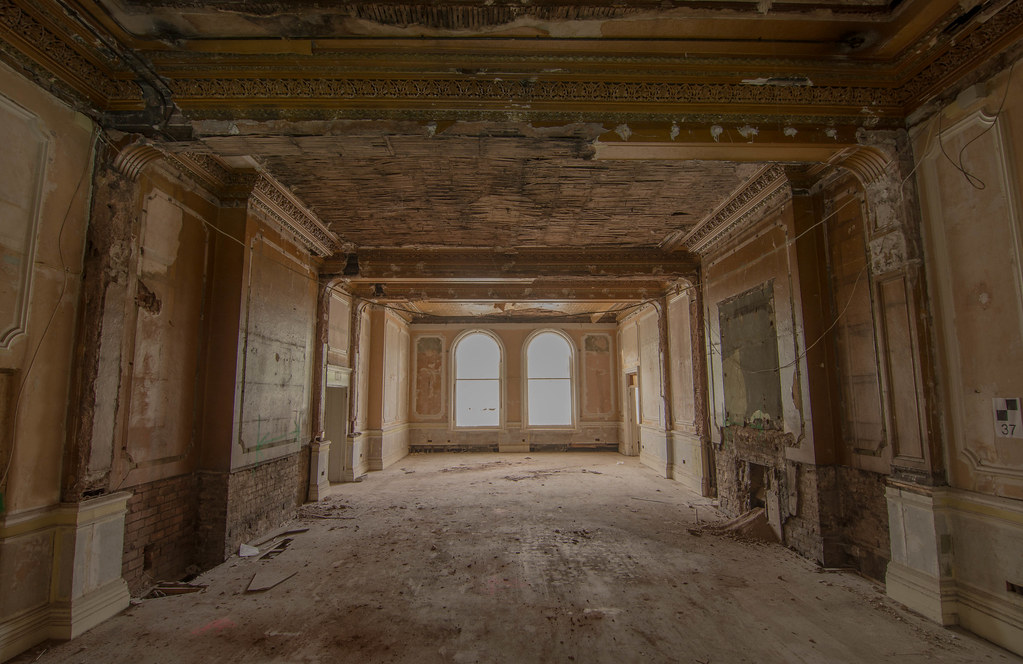 oooh how original, a corridor with lots of light/dark contrast 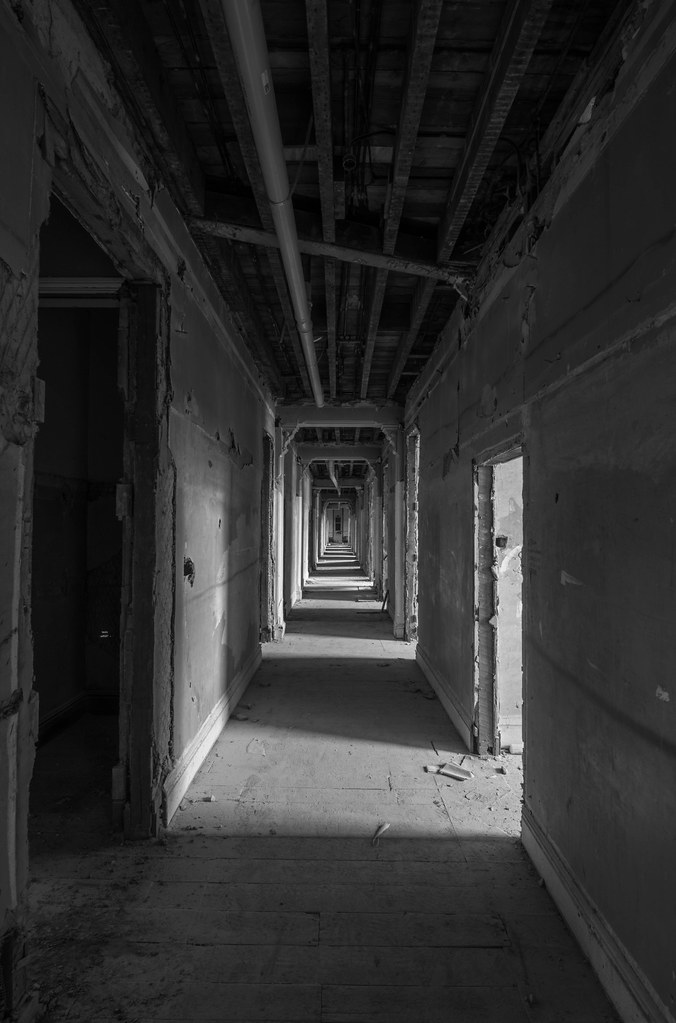 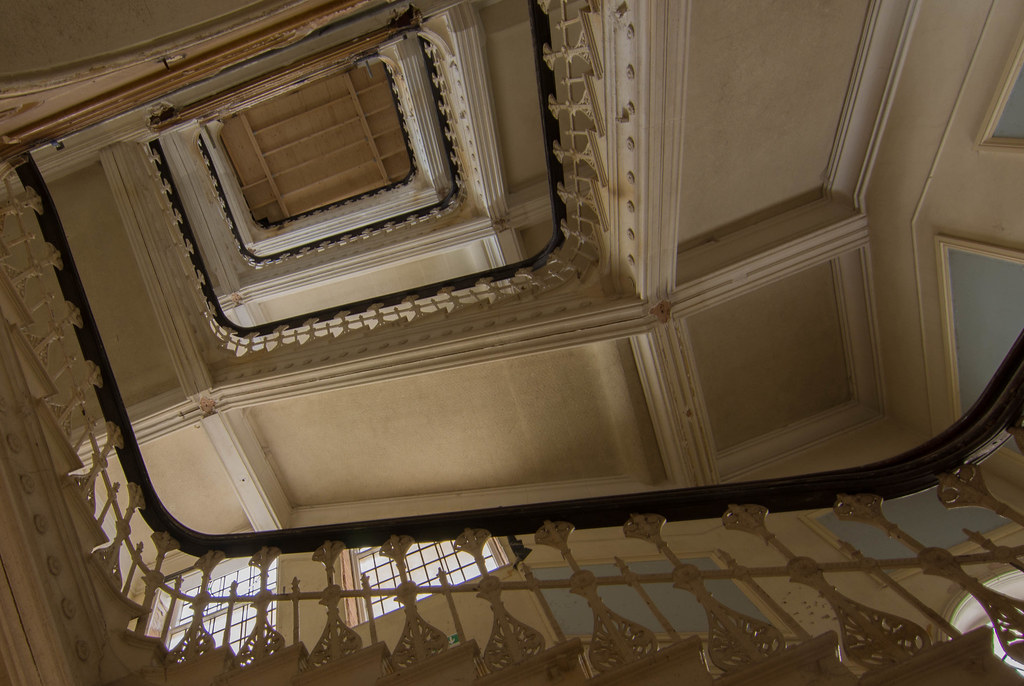 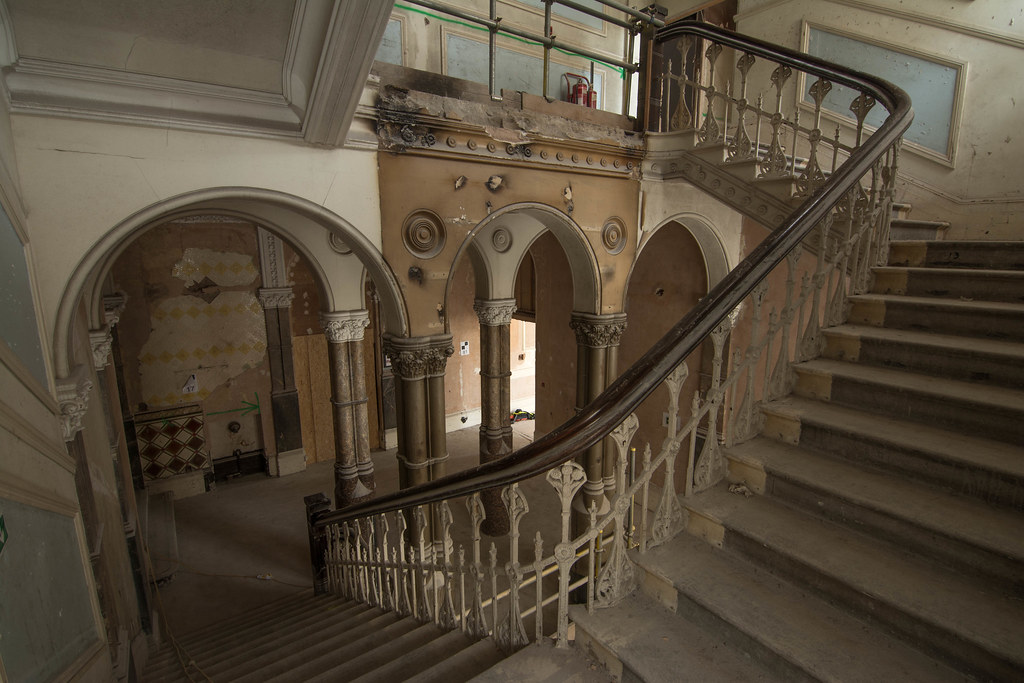 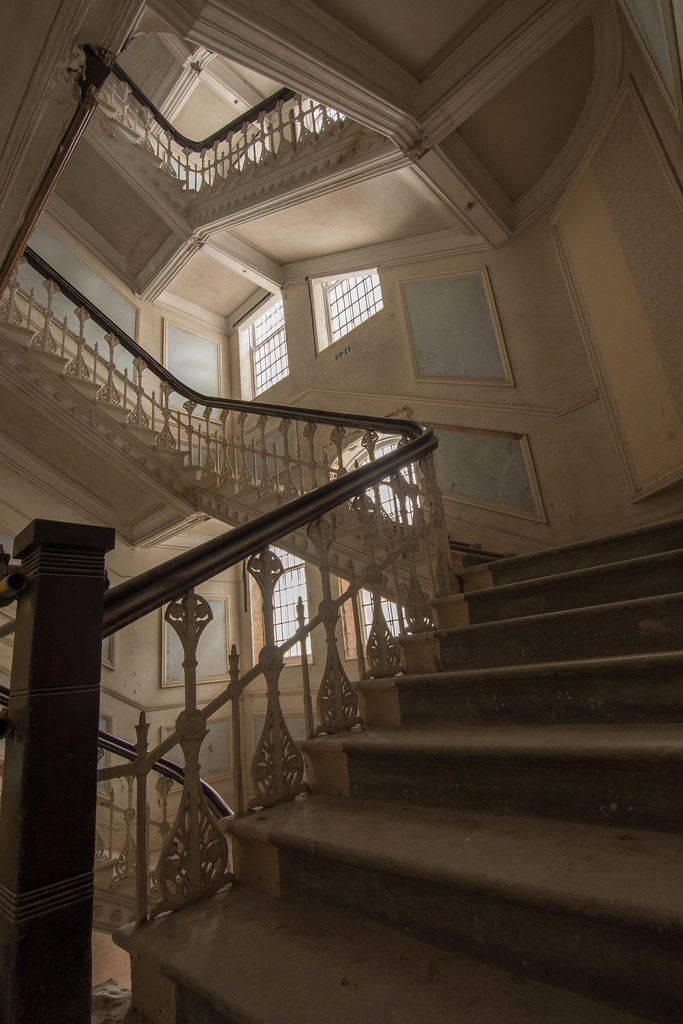 Even the building work that was never seen was cooler back then! seriously 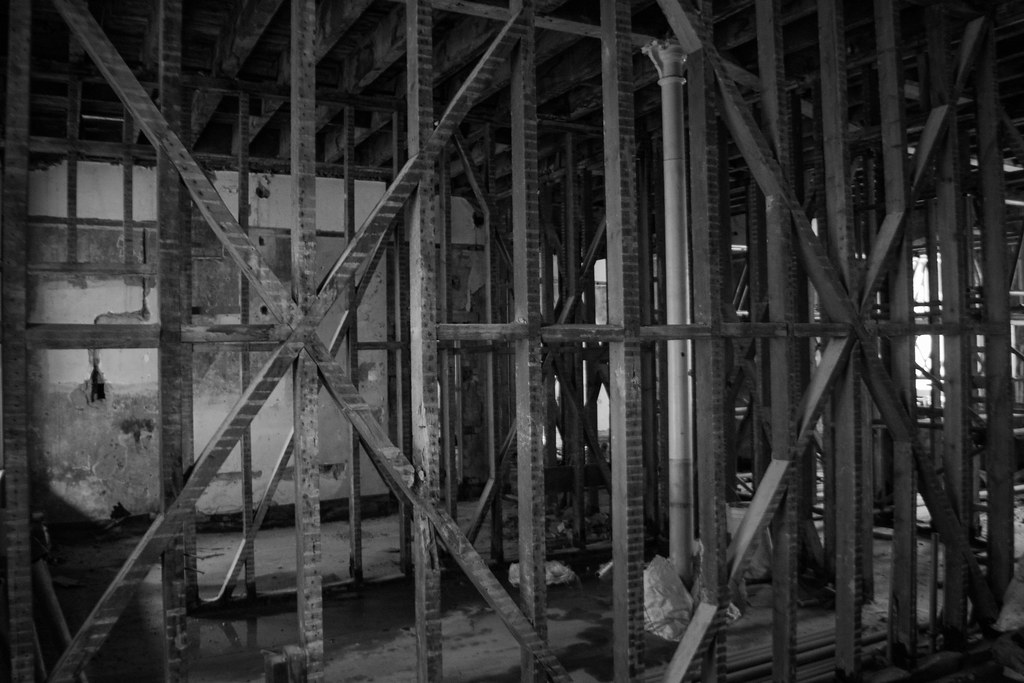 needless to say the black and white below isnt my shot! 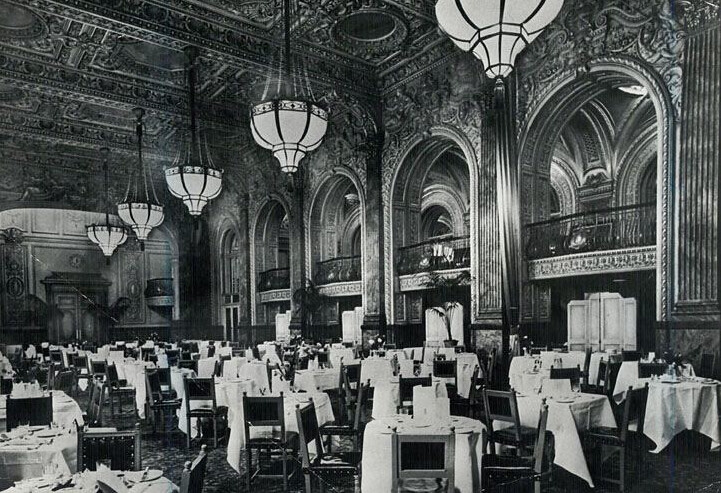 these however are mine. 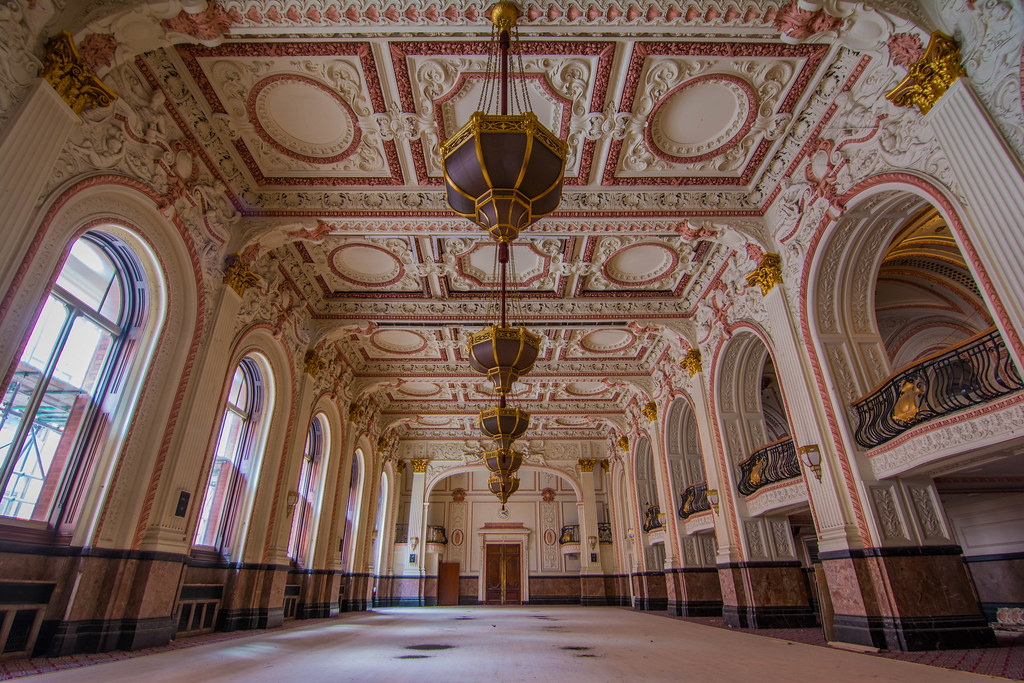 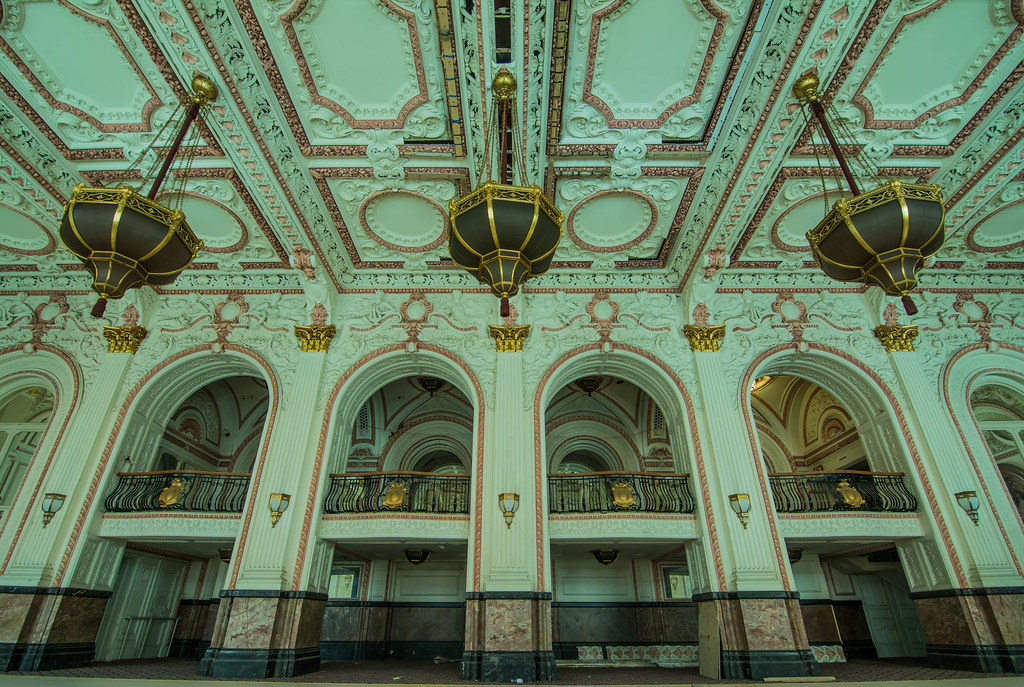 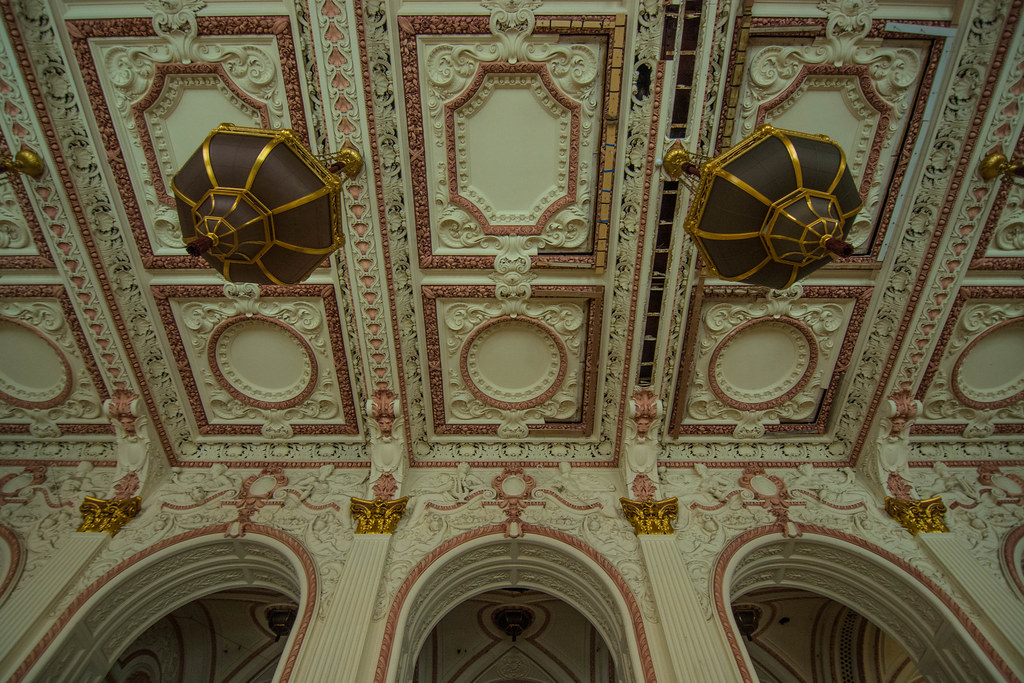 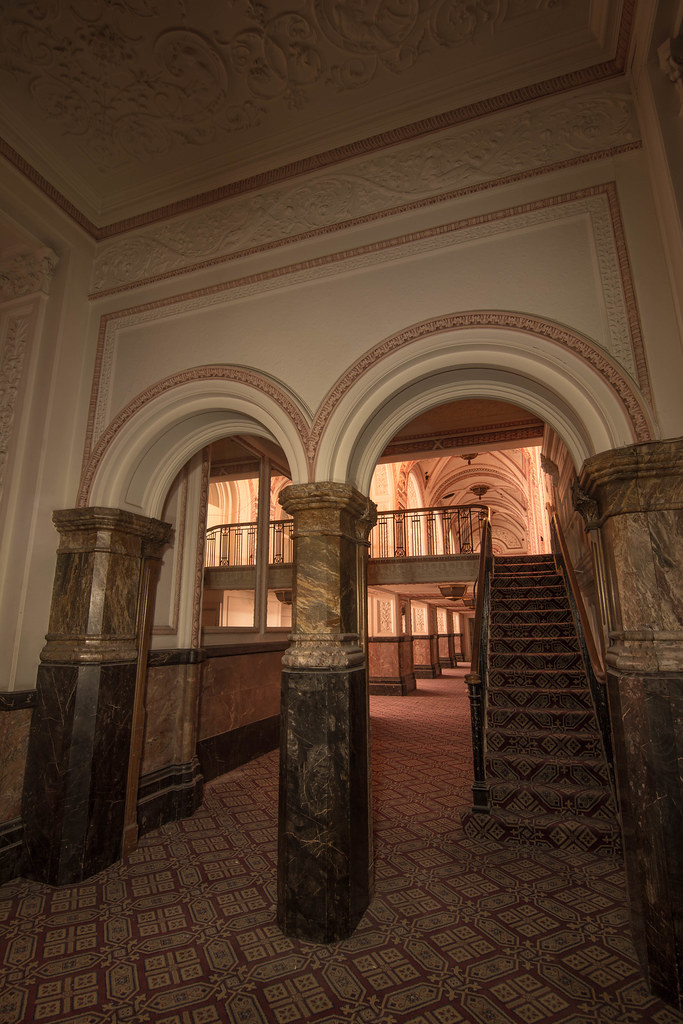 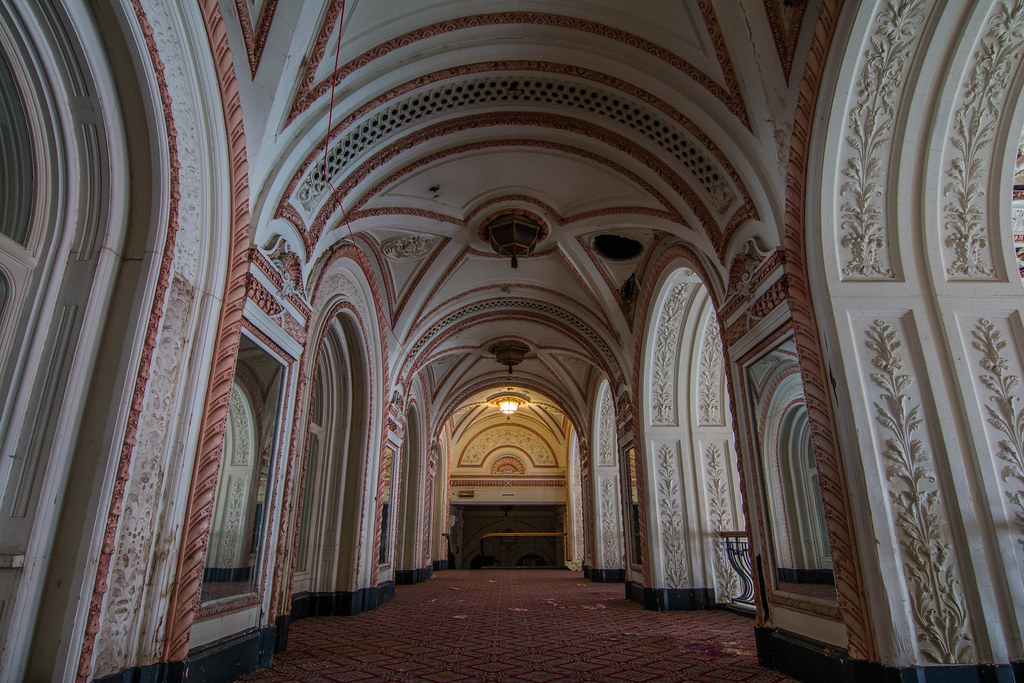 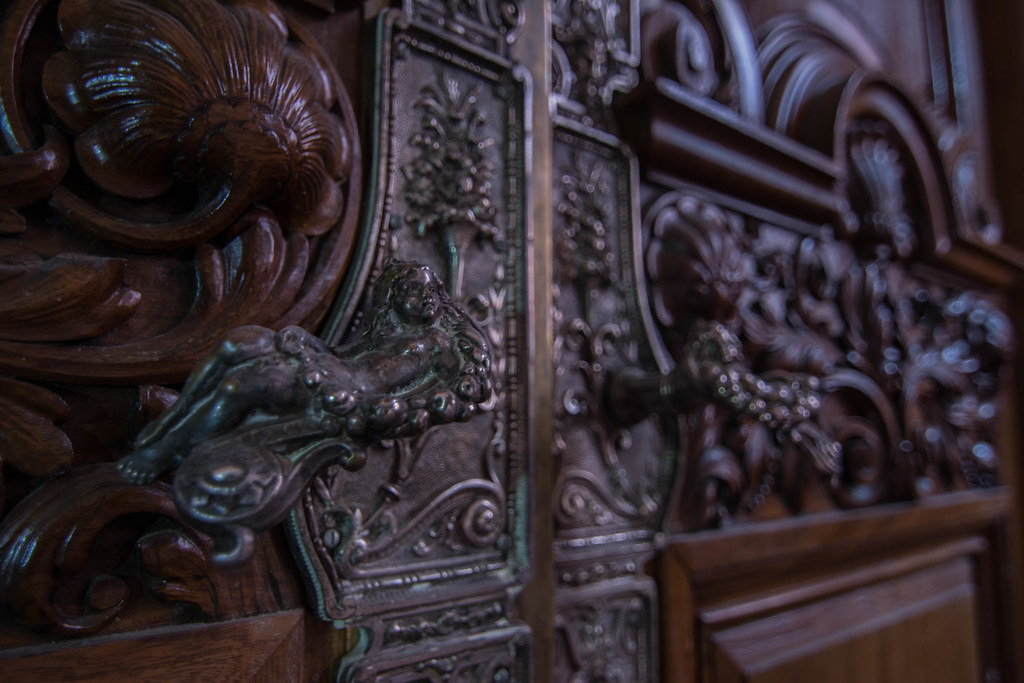 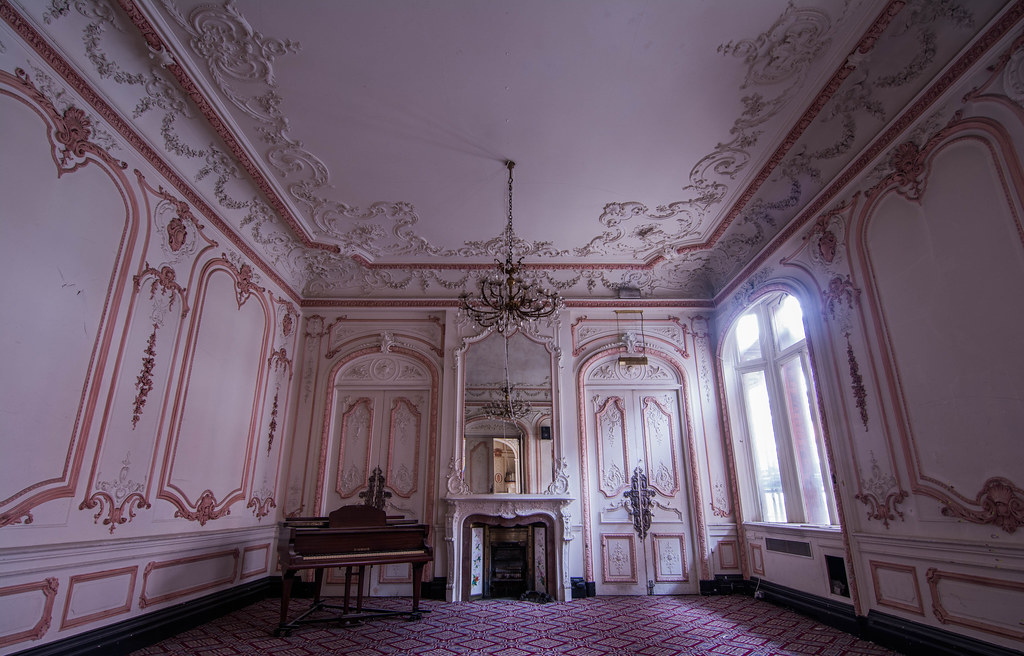 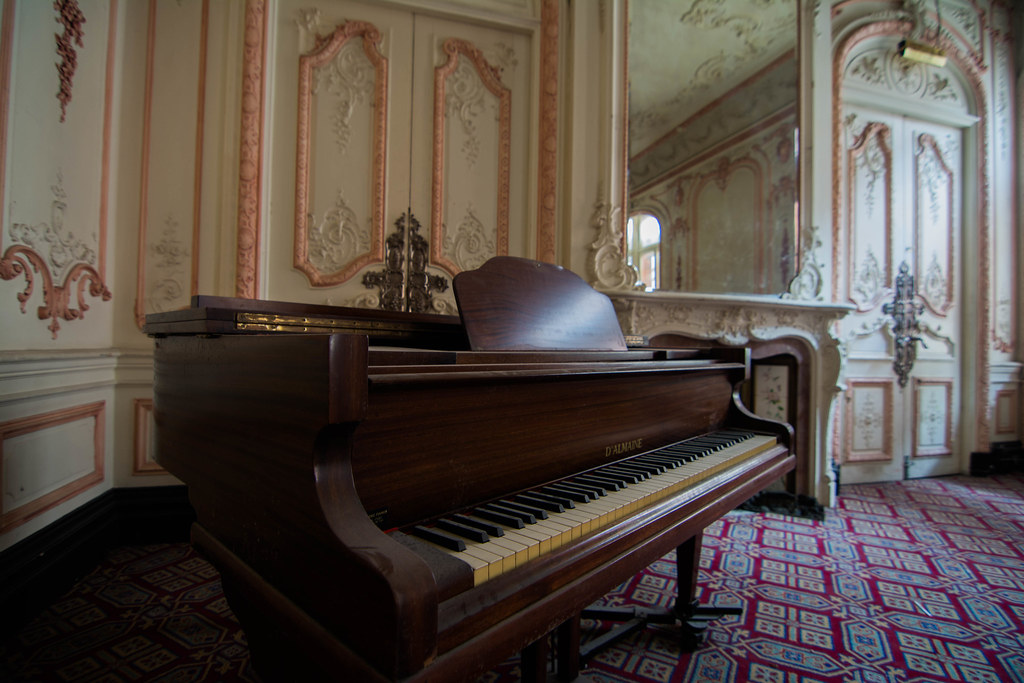 one last look on the way out 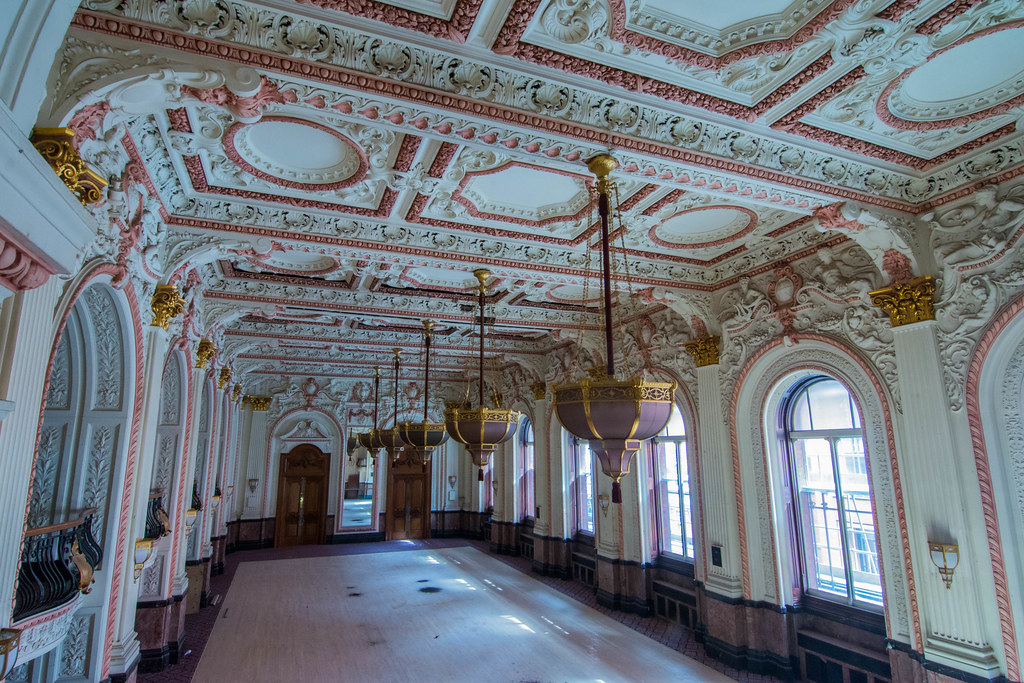 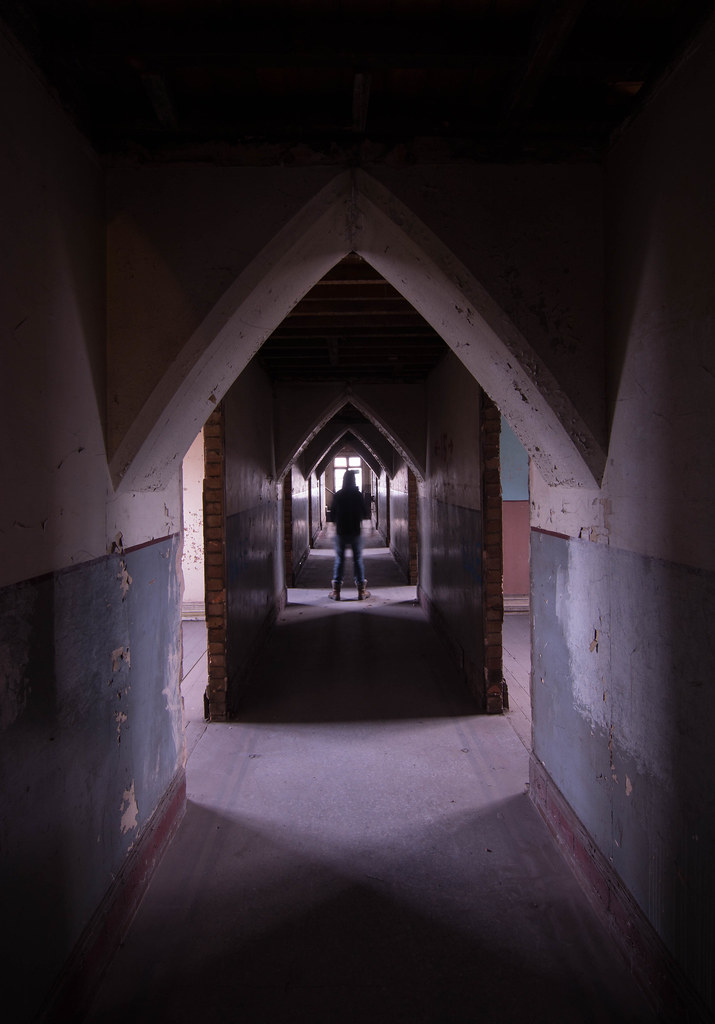 thanks for looking, take it sleazy kids.

I do so love the look of this place and youve captured the place well.

Nice report mate wish we looked at this when we was down there!

Oh my word this place is lush Nice one!!

Yep, that Grosvernor room is mint. As Raz just said, we should've had a look here

Is that scaffolding I see through those Grovesnor Room windows? If so they are cracking on with this.

yes mate, they are going at it 6 days a week aswell so times definitely ticking.

Absolutely stunning!! I love those stairs, every time I see a new report from you your pics get better and better. Think this one is my favourite

Absolutely stunning!! I love those stairs, every time I see a new report from you your pics get better and better. Think this one is my favourite Thanks for sharing
Click to expand...

thanks a lot! think most the credit deserves to go to the room for being absolutely epic though!

thanks to everyone that missed the original thanks aswell !! :cool2:

Welcome to my second home lol. Gorgeous pictures though!

another nice set, gutted I never got to it, plenty of pics to make me jealous