A while back, on the tourbus location adventure there were two places in need of visiting, both rather large structures. With the first one being completed earlier in the day we headed onto this. Considering demolition was underway it was a surprisingly uneventful visit with the only fuss being the siting on security on a motorcycle whilst on our way out.

Unfortunately most images were taken using nothing but sheer guess work and rage so the ones see here are, terrible. 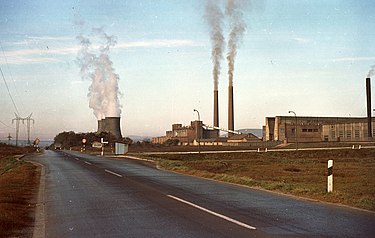 ​
History
The demand for electricity was growing and by 1949 it was clear that a new powerstation was needed. By autumn plans were drawn up and finalised by a group of Czechoslovak engineers for an inter-state framework. Certain equipment was to be provided from Czechoslovakian contractors and partners, with the majority of the main structure for the power station undertaken by the Hunagrian Factory Construction Company.

Construction began in 1950 finishing in 1954.
Throughout 1951 after the beginning stages of construction, the power plant's company was founded as the Inota Power Plant Company shortly after trial operations began on the 7th of November. This was also this time in which the official name to the site was given, Inota November 7 Thermal Power Station. Later the same year, in December, the plant would begin supplying the Hungarian power grid.
Following these initial stages the construction pushed on with more boilers being installed allowing more units to generate power. Eventually, after these final stages, the facility was now generating 120Mega-Watts across seven boilers powering six Turbo generators.

The plant suffered numerous teething troubles within the early phases of operation.
Numerous issues with insufficent coal supply from nearby mines lead to the plant sourcing fuel from mines further away using the connecting railways.
There were also continuous issues and failures of equipment within the plant which required calling in engineers from Czechoslovakia from which the companies who had installed the equipment were based.

Further extensions took place from 1973 to 75 seeing the construction of gas turbine power station to provide additional power for when the main station was running at peak capacity. This helped to bring the overall capacity of the station from 120MW to 164MW.
Continuing on to 1977 the power plant's boiler were gradually overhauled due to their heavy operation.
The facility later came noticed due to the excessive pollution levels raised from the station which was pumping out around 120 tonnes of Sulphur-Dioxide each day of operation leading to the installation of fly ash separators in the 1990s.

Following this, reconstructions of areas of the site started to take place in a bid to modernise the already outdated structure. Soon followed by the privatization of the Bakonyi Power Plant Company who where the owners of the site at the time. Modernisation plans pushed but after the demolition of one of the chimneys the plans to continue were delayed. It was decided that contracts would not be extended for the plant and by 2000 the Gas Turbine station had shut down. It would not be long until the min station followed suit with production only at a 10th of its original capacity the plant was finally shut in late 2001.
Since the closure demolition has creeped forward with the removal of some equipment and the demolition of the other chimney the plant was slowly being gutted.

By December 2018 (the time of this visit) the turbine hall had been reduced to rubble and most admin areas cleared out with the control room unable to be found. Since then the boilers have started to be toppled over and scrapped as demolition starts to speed up.

You got some belting shots there

Scale is hard to convey through pictures but internals of cooling towers never fail to wow me. Nice job!