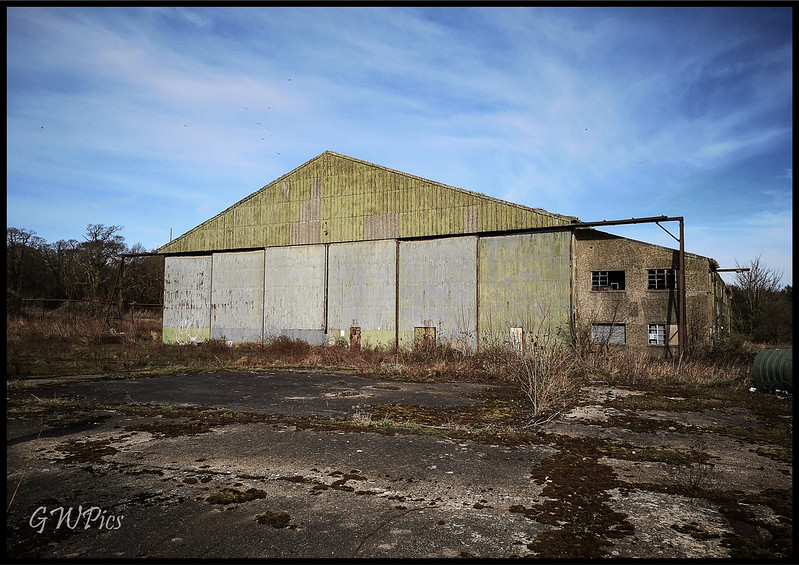 Probably not as exciting as the title suggests as we only did one hanger here due to the other buildings being used, but having read the history I think a return one day is in order.
What we appeared to be in was a typical aircraft hanger but was puzzling as there was clearly no flat ground for an airfield here, reading the history it all becomes clear.... 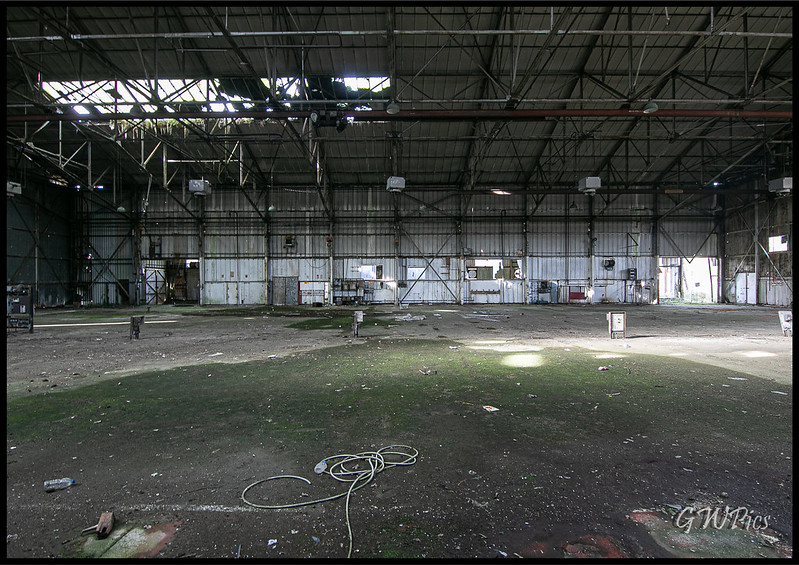 In 1939 the 50 acre Fryars estate was requisitioned from the Burton family, for use in the war effort. The site was allocated to Saunders-Roe, who used it for modifying American and Canadian built Catalina flying boats. Over four years 399 Catalinas received a wide range of adaptations to fit in with RAF needs, including .303 British version Browning machine guns, British type bomb-racks and RAF radio equipment. They also installed highly secret Air-to-Surface Vessel radar (ASV) and from 1942, Leigh lights. German U-boats had to spend time on the surface at night, while they re-charged their batteries. The combination of radar and the high powered searchlights enabled the planes to find and attack a U-boat before it could dive. 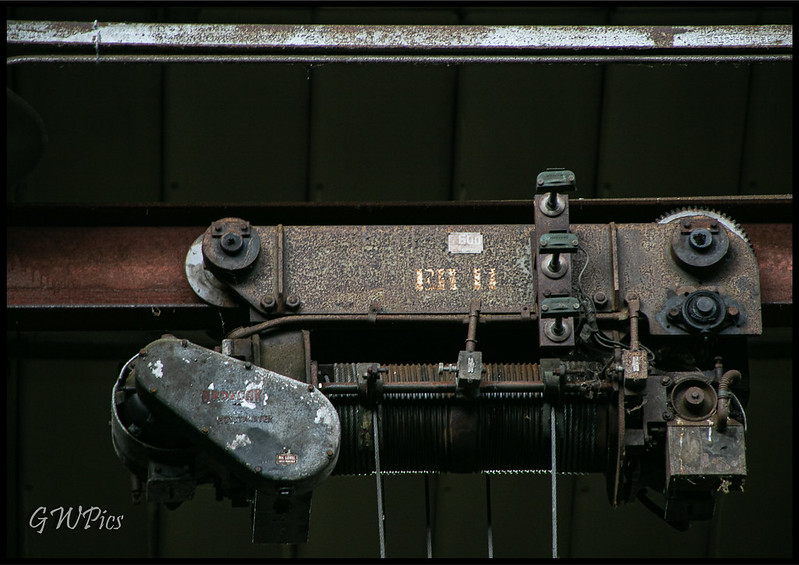 At Llanfaes, a long slipway was built across the road and across the foreshore to Fryars Bay. The flying boats were able to utilise the large area of deep water along the east end of the Menai Straits. The Catalinas were manufactured in USA and Canada, and were initially sent over on cargo ships, but from November 1942 they were able to be flown over direct from either Bermuda or CFB Goose Bay, Canada. One of the survivals from this time is a large concrete turning circle, just south of Fryars House, used when setting aircraft compasses. After the war the factory diversified into a wide range of engineering tasks. Some aircraft activity continued, such as trialing floats for Auster light aircraft, and a pioneering use of aluminium in the manufacture of motor torpedo boats P1602, Dark-class fast patrol boats, Bras d'Or (R-103) Hydrofoils and Airborne lifeboats. They also produced a wide variety of civilian and military land based craft, such as the coachwork for buses. 620 of these buses were exported to Cuba in the 1950s. At its height over 2,000 people worked at the site. Fryars House became the offices. In the war, workers were housed in nearby Henllys Hall, Plas Rhianfa (now Chateau Rhianfa Hotel and in prefabricated housing. This was gradually replaced by permanent houses such that a new village of Llanfaes has grown up north of the factory site

The landing strip & turntable can be seen on google here but of course had no idea what these were when walking over them. 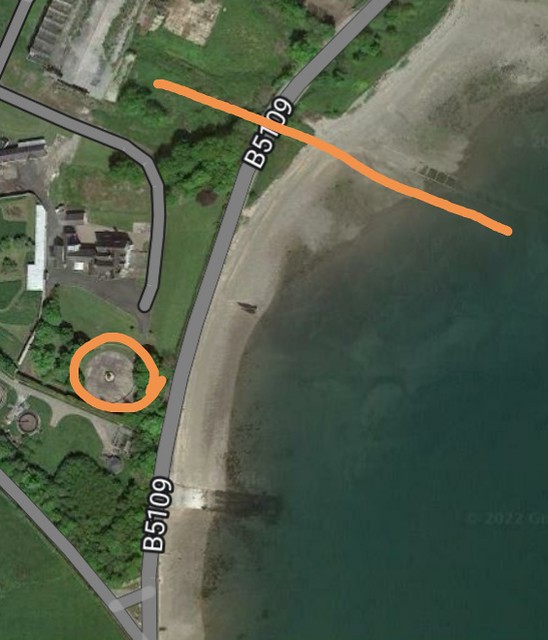 In 1968 the Llanfaes SARO site, along with an engineering works in Llangefni were merged as part of the Cammell Laird shipbuilding firm, to become Laird (Anglesey). By the 1990s this had become owned by Faun Group, who in 1997 opened a new works in Llangefni and the decaying wartime hangars and buildings finally fell into disuse. Aluminium construction still remains the core activity of the firm at Llangefni. 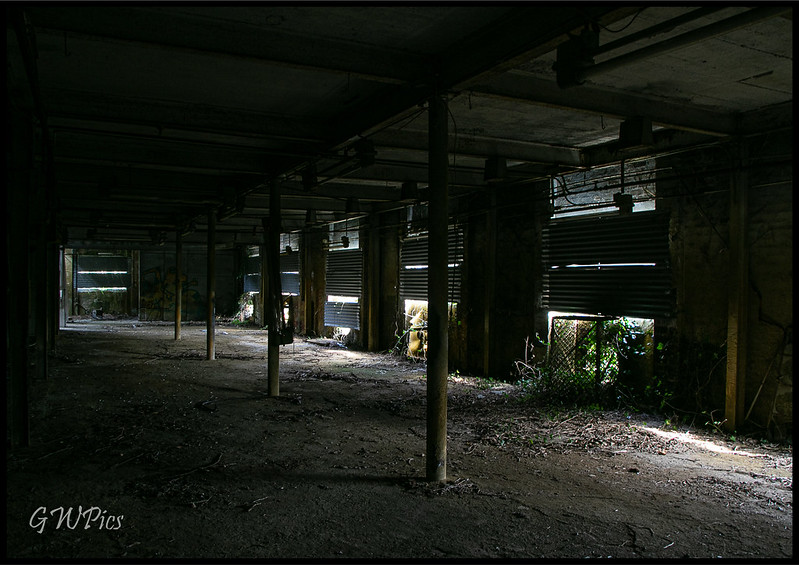 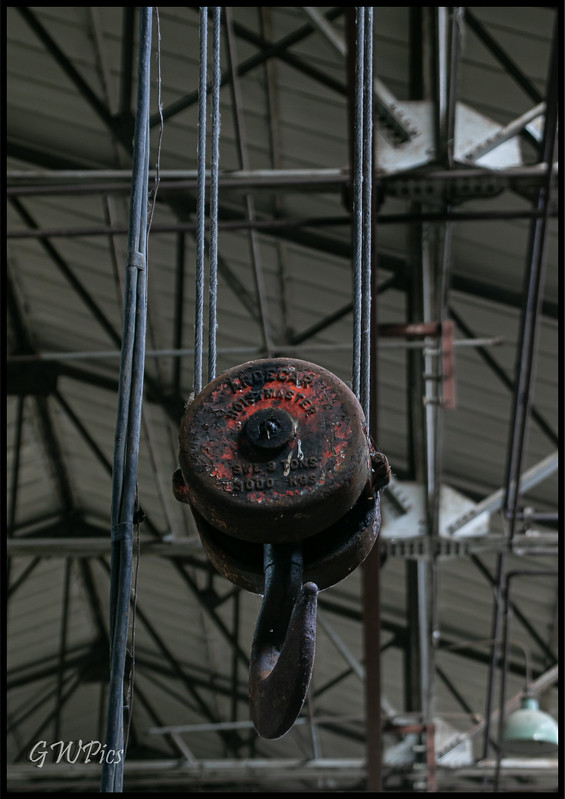 This part of the hanger had been used for a paint bay presumably for the latter coach building. 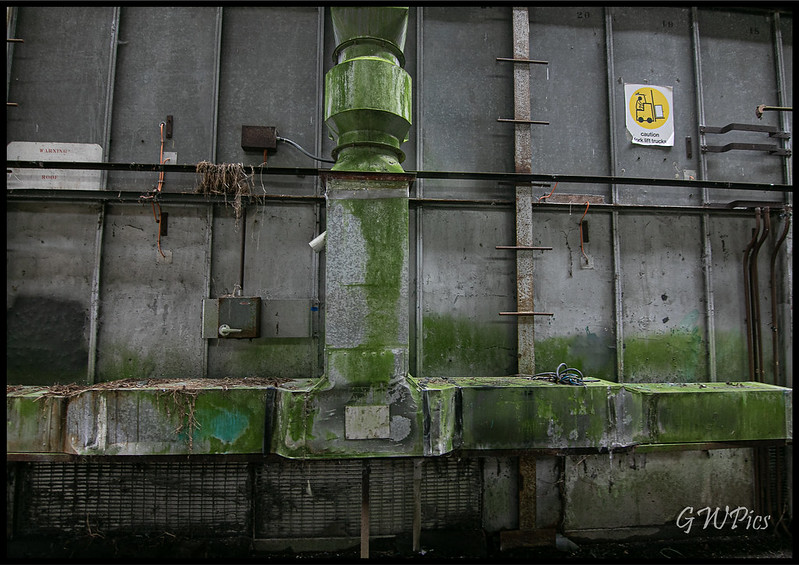 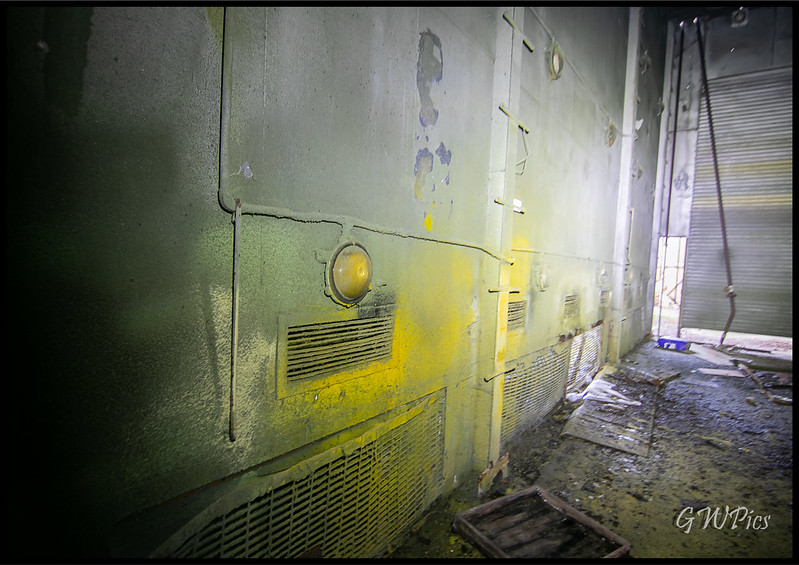 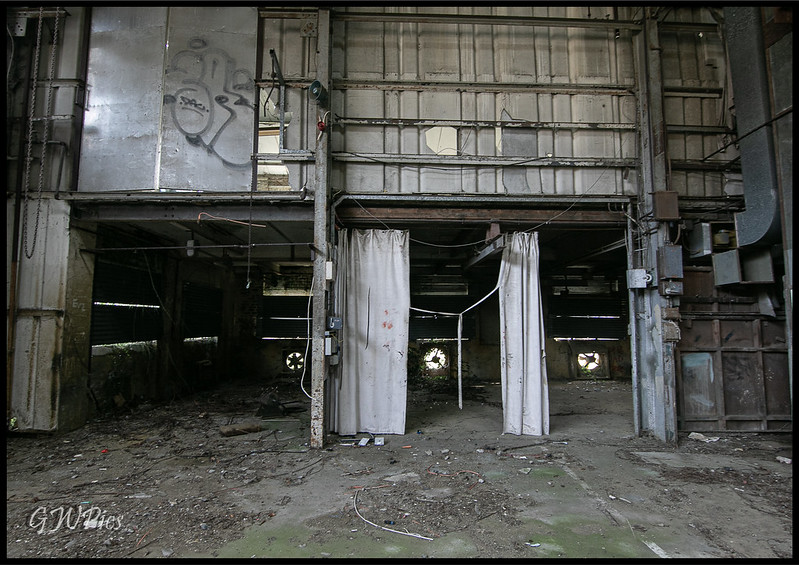 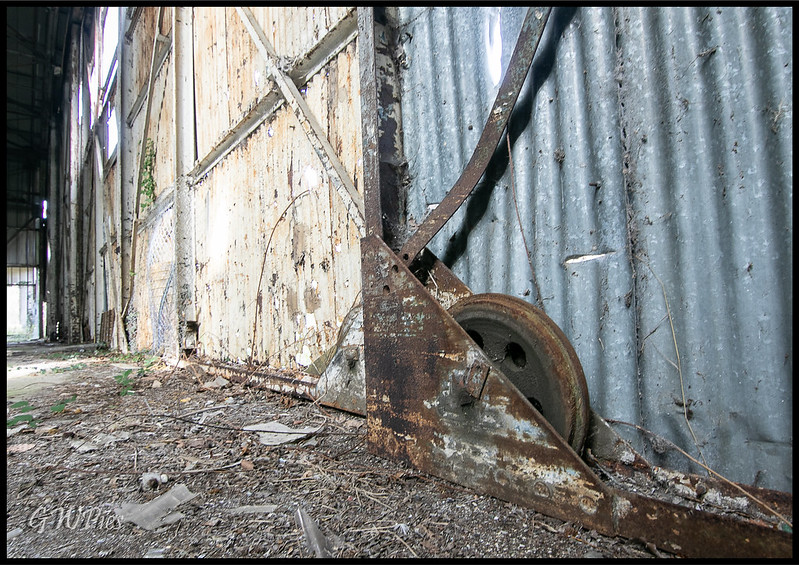 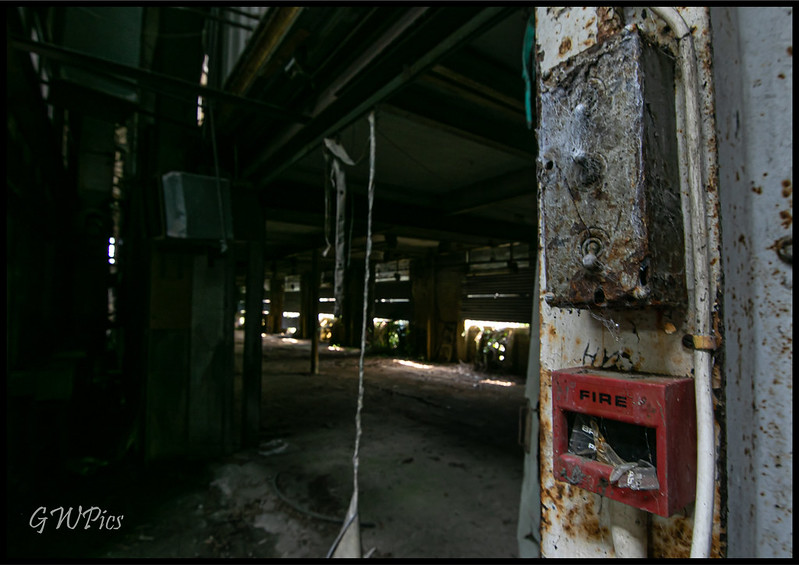 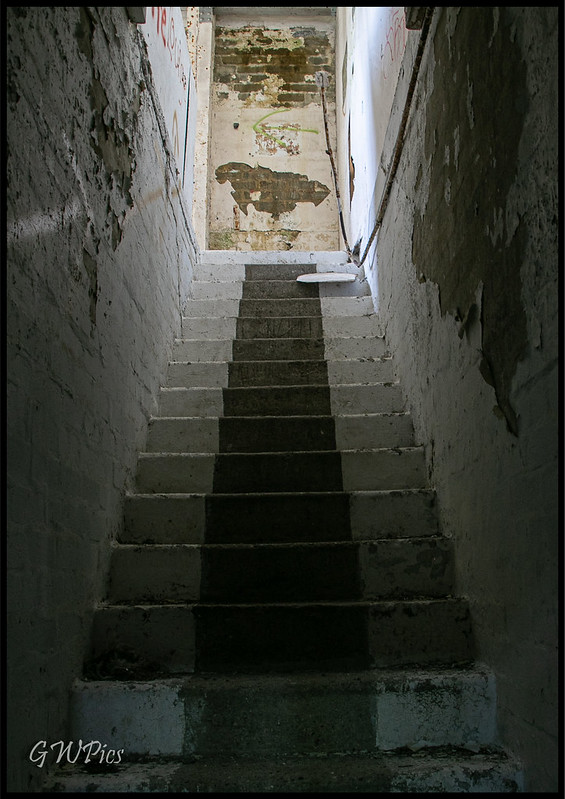 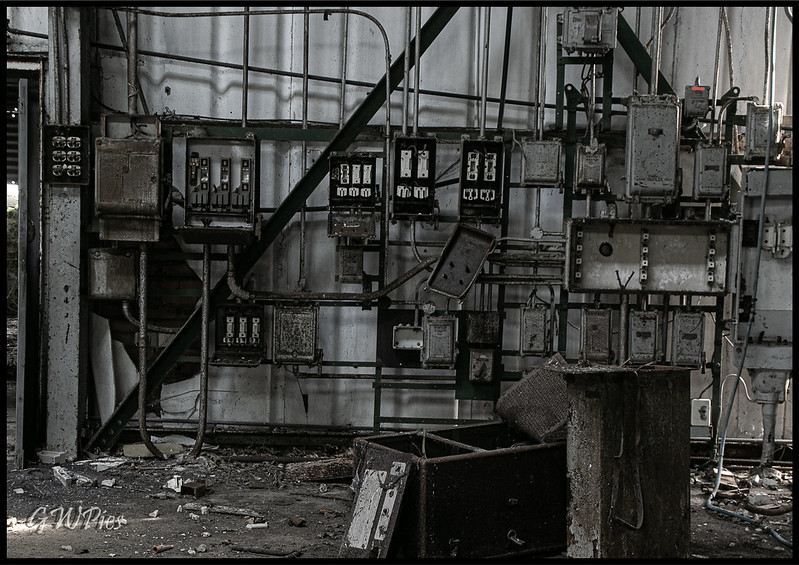 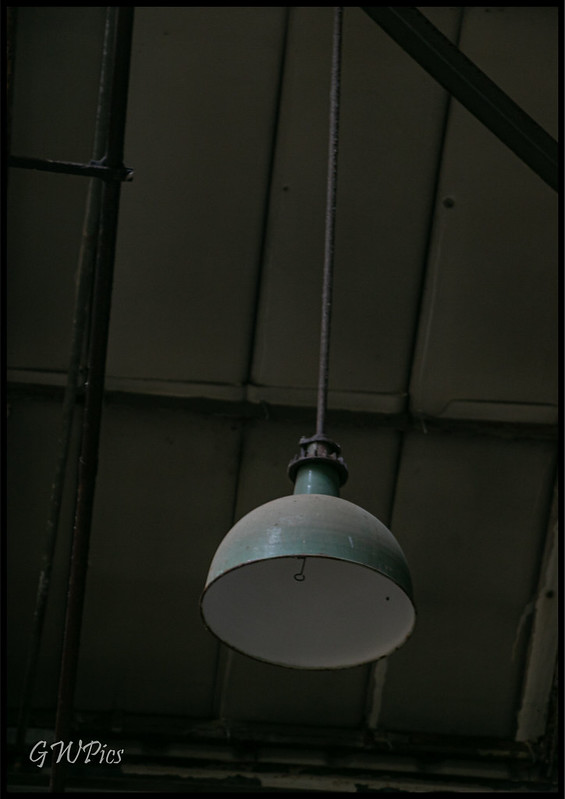 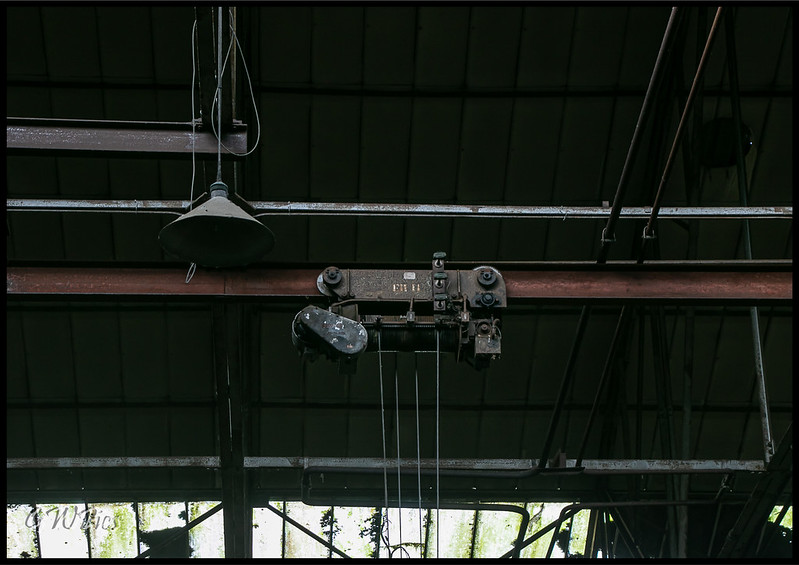 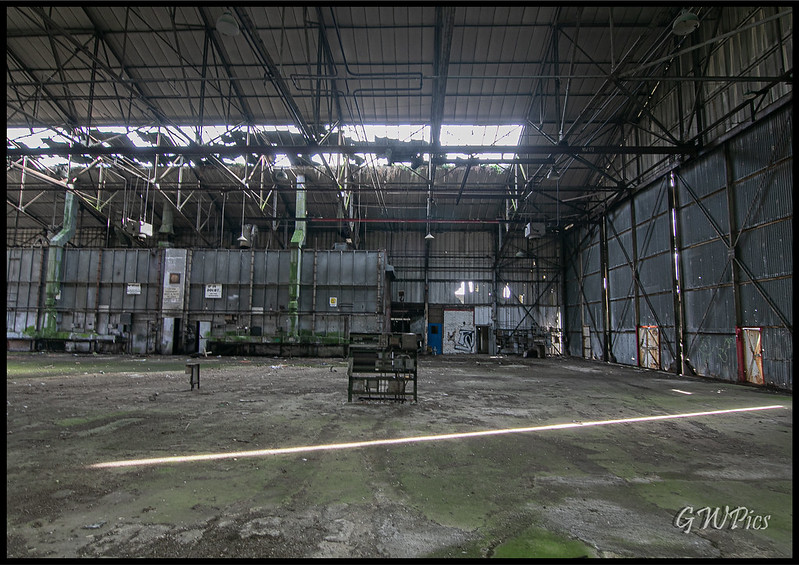 Like I say just a big empty warehouse really but with an interesting history, I quite enjoyed our mooch around this one.