"It can't be this bad. How can it be THAT bad? How can it be THAT ruined?!" were my first thoughts on this place. Fully demolished in 2010-11 with the exception of three buildings, what once was a site bigger than I could ever have expected was now mostly a leafy rural housing estate. All that remains of the original colony is the superintendent's house (well, a house behind the gardens), the clocktower and manor house.

If there's one type of place or era that's been talked about in exploring more than any other, it's the golden age of the asylum.Closing in 1996, at a time similar to the asylums, Leybourne Grange colony was often incorrectly labelled as an asylum and inevitably associated with the aforementioned golden age. I remember looking at this place in my early days of exploring (online, not in person), but I never ventured there mainly a. because it was too far away and b. far too trashed to be worthy. But at the same time, I always looked at the manor house and wondered what it was like inside, being one of the golden age sites. For years boarded on every floor and alarmed, I never saw anyone properly cover the inside apart from the staircase. So alongside another golden oldie, I decided to venture out there.

I got on site, and once again for no reason my nerves hit me. I was alone and had heard about the guards, but I otherwise had no reason whatsoever to be nervous. It was stupid, really stupid. Eventually I picked up the courage and went to the clocktower. The floors were among the worst I'd ever seen, and the building had lost most of its photogenic value so I only left with one photo of the clock mechanism. 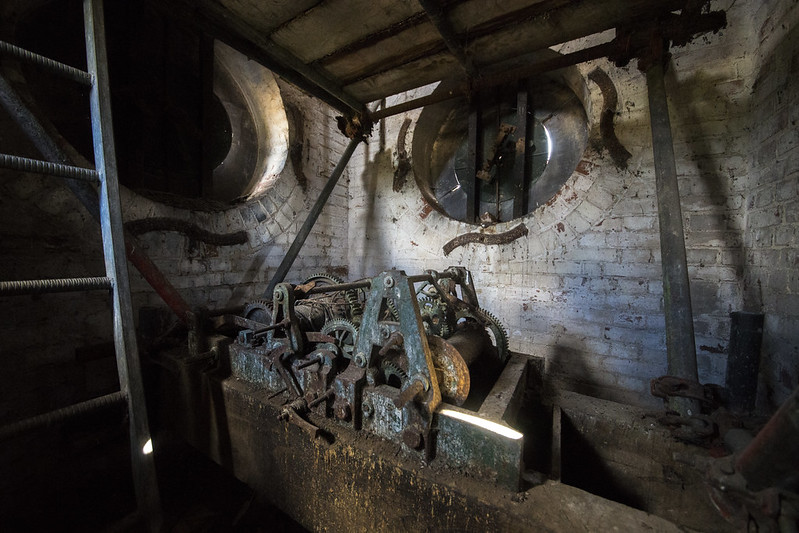 I did climb to the top to scope the site out, but forgot to take my camera. Silly me. 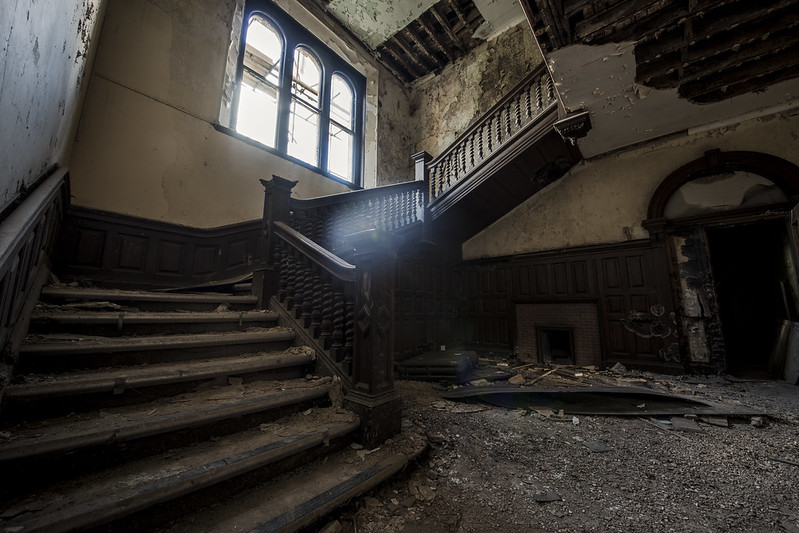 By no means did I expect the mansion to be mint, no no. But THIS BAD?! Literally, crumbling to a point where I have to watch EVERY step? Yep. I came in expecting a moderate level of decay, but this was worse than anything I've ever done. Utterly ruined. 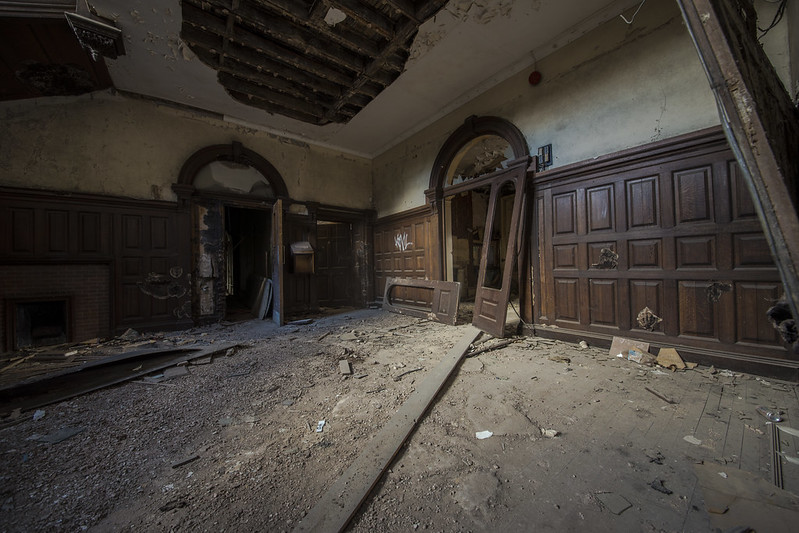 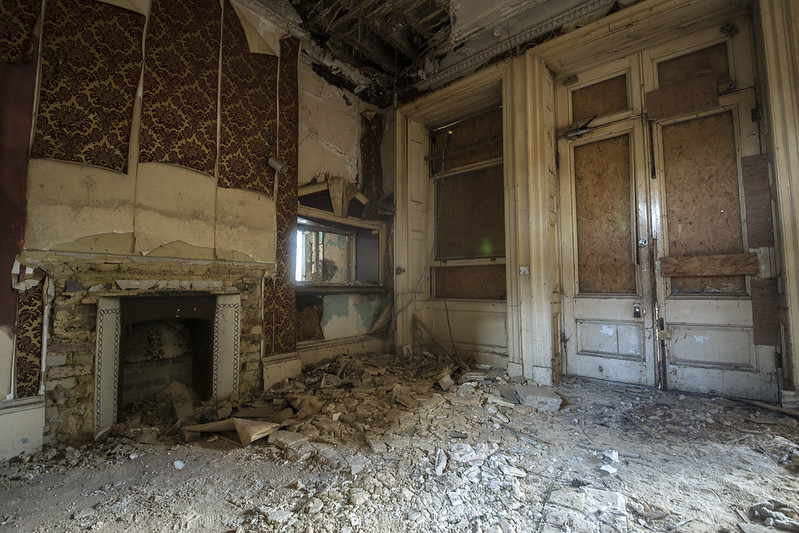 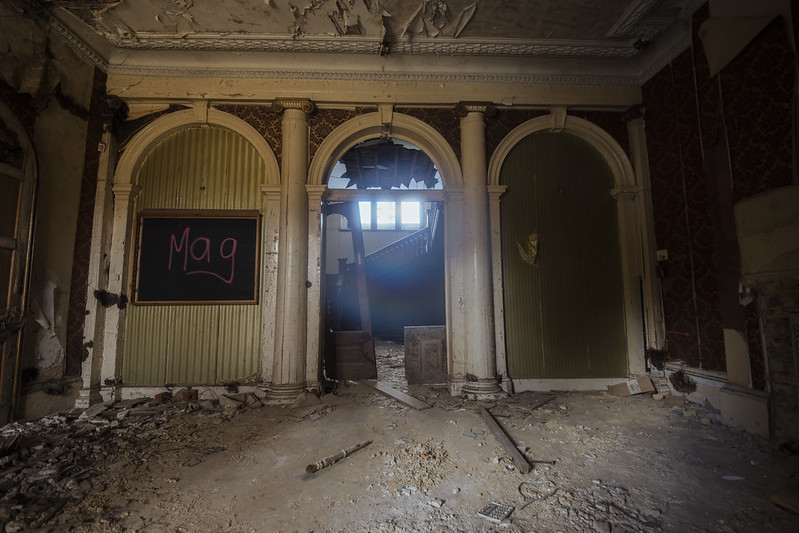 It goes to show; you can alarm a place to its rafters. You can board up every window, every door, but once dry rot or wet rot gets in it's like a cancer that just spreads relentlessly. I never thought it could be this bad, but years of fungal blooms running riot have turned this once-grand building into a fragile, ruinous shell. 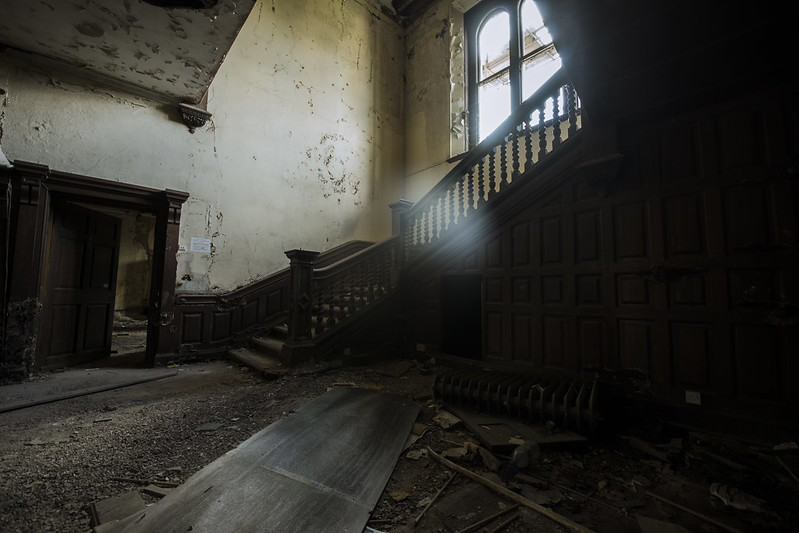 On the whole, contrary to my expectations there wasn't that much to see inside but nevertheless some nice little details so as not to go home feeling empty handed and TOO disappointed. 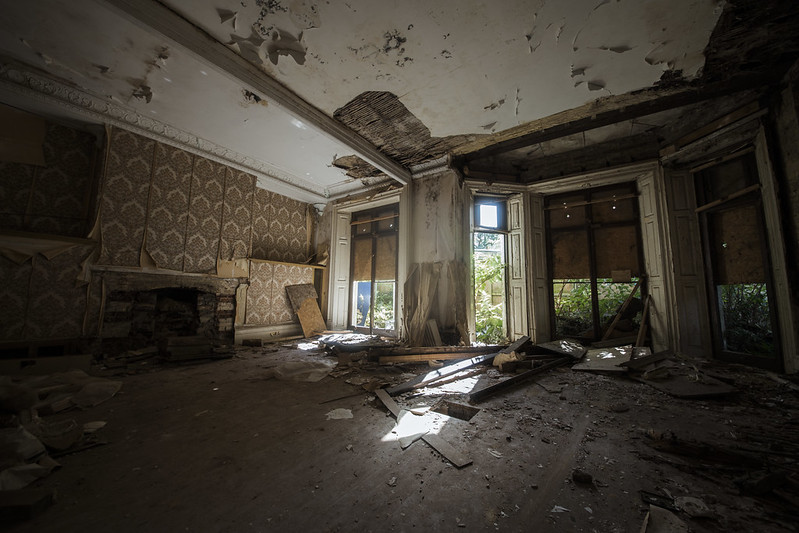 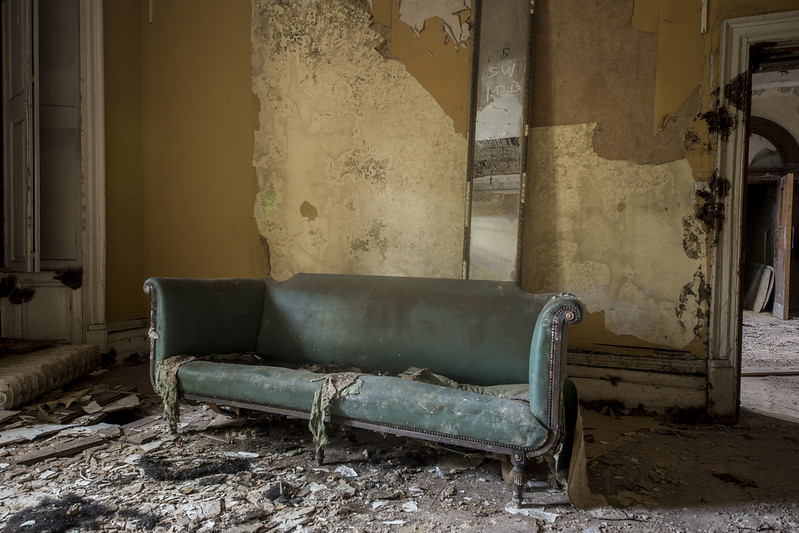 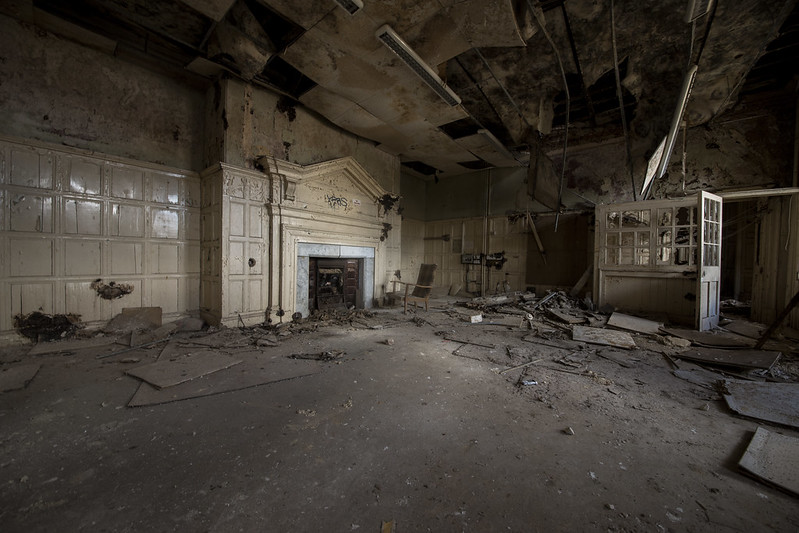 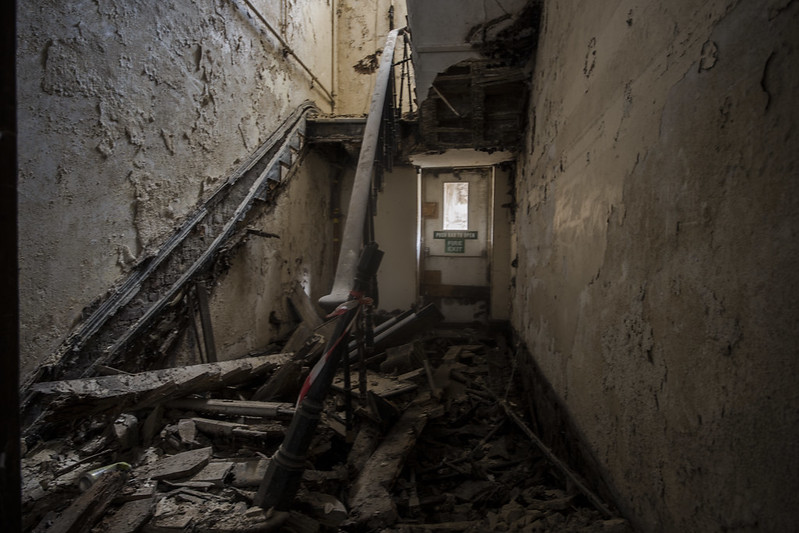 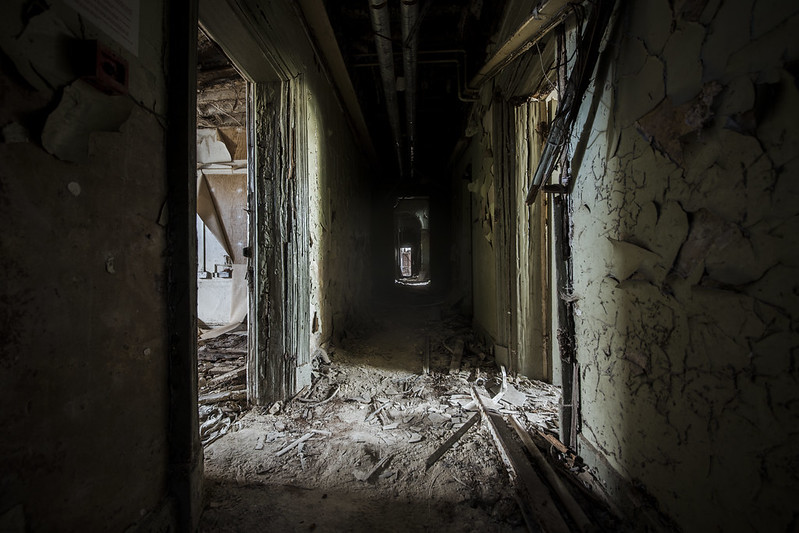 The ground floor had all the interesting features, sadly. Upstairs were just more tags and bare, crumbling rooms. 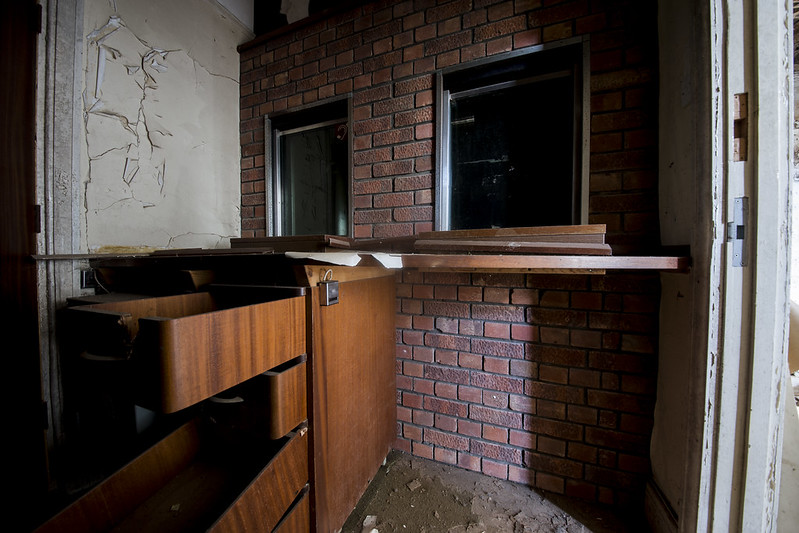 I had to watch every single step I made. How I didn't even put one foot wrong is a miracle. 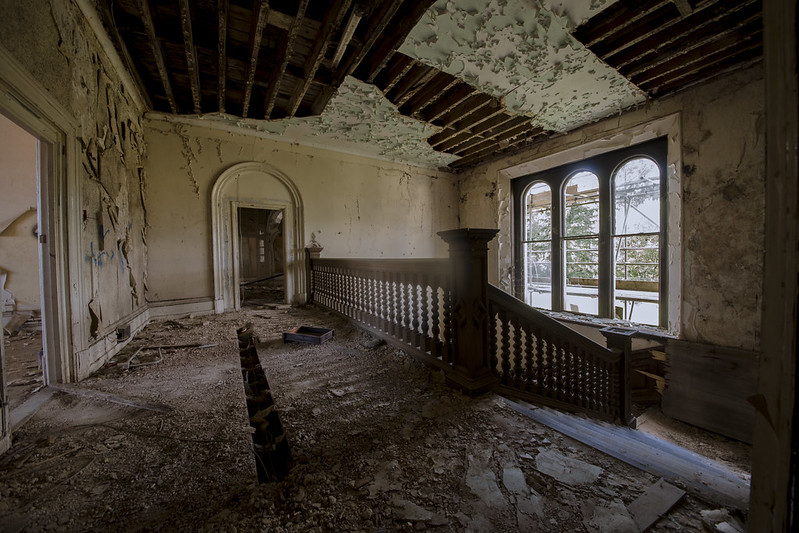 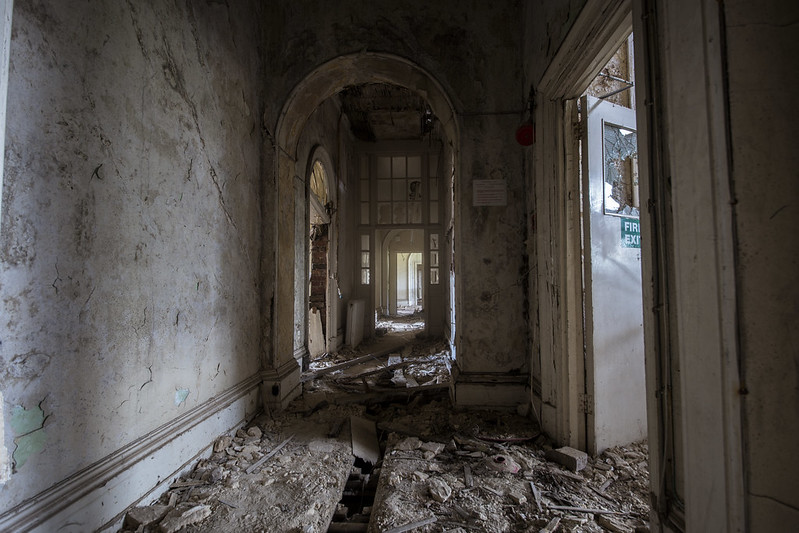 The state of this place in a nutshell. That's not even damage caused by fire! 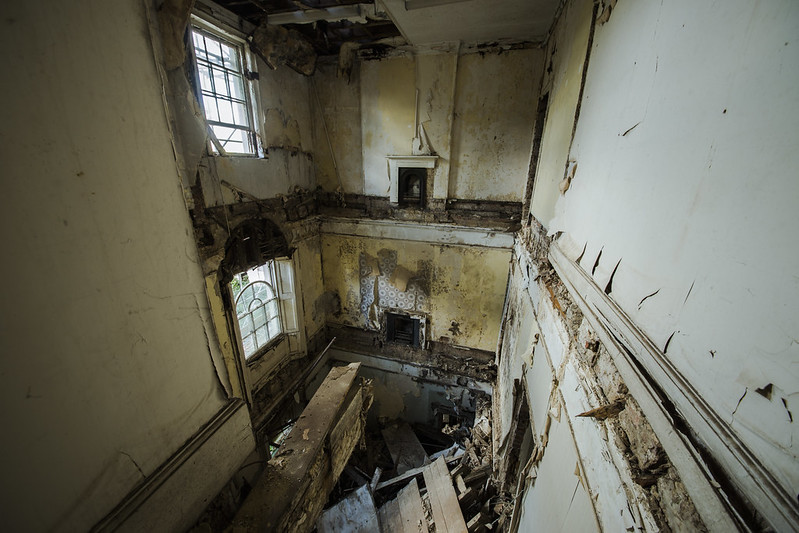 Having seen everything, I ran back out and bumped into some local teens. "Have I been busted now?" I joked. Had a nice chat with them about the guard and how angry he'd been when he caught them. That didn't stop them going in many more times though; heh, I was lucky to not catch a single sight of him. "Nah, the guards don't work on Sundays" one said. Ha! Young explorers in the making? They asked me if I believed in ghosts too, which is to be expected to be honest. I told them that "the only ghosts I believe in are the guards you think are lurking at every corner but aren't there!"

On a final note, all the remaining buildings thankfully will get restored eventually. Nothing has happened with the clocktower except installing scaffold to stabilise it, same with the superintendent's house behind the gardens. As for the manor, scaffold and metal sheeting is over the top now; as far as I can tell if they're doing anything with the place it's securing the roof before anythign else. Either way, it's a herculean effort ahead.

Once again, thanks for reading through the waffle. Cheers,

That is ruined but I like it, reminds me of Chateau Congo which is in a much similar state.

As much as it's trashed it's pretty photogenic. I like it too

WOW that is looking a right state these days!

I'm sure they were supposed to be doing something with this, but I guess developer got greedy/lazy and did the easy stuff leaving this to rot.

In a bad condition, but very nice. I like it.

Looks a bit dodgy in places... then that shot with no floor!