Hi everyone! Been an avid post watcher for a few years on here, been posting to other sites but thought it might be time to branch out

Note to anyone interested in going - Police are on high alert, have seen 2 groups taken away in handcuffs to date, vans are moving in daily removing items from the house. Nothing left to see.

History
The building is listed with a small write up, but nothing much apart from an artist Charles Robertson living here from 1844 to 1891. The most recent occupant left basically everything behind, Making it a treasure trove of stuff to look through, here's the most i could decipher:
Last previous occupant was a Mrs De Mello, living quite comfortably in this house until a divorce in 2004 (with many papers to boot) lead down a spiral down in her life
2013 was the last evidence of paid bills for phones, water etc
2015 saw things go downhill. Unpaid bills, taxes and car payments all ending with bailiff letters
Around this time she appeared to run to Brazil, her home country where she appears to have another house
2018 saw a second spike in bailiff notices, including a brand new letter i found, stating a lawsuit from the Bank of Scotland, because of her failure to show to court the house is repossessed and she owes close to £150k in court fee's. 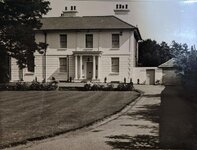 I don't click bait, but i'll mention at an unknown time it appeared to be used as a brothel before its abandonment. Bedrooms with sex toys, wigs and lingerie amongst photos of kids and toys. Fucked up stuff

Explore
Having received a tip-off from tonymini, I began scouting as i'd just moved house, and its the same distance to the train station as my old place!!
The river in the back garden makes rear accessing impossible, the adjacent petrol station and tyre shop makes phone calls to the police, i had to go full stealth.
Once in its free roam, 1st time i went alone (1st time on my own ever) but i had a lot of fun, staying from 8 to well past 11 just leering at stuff, including laptops and tape players with creepy singing!
On with the photos:

I do like a good urbex wagon (To save you the effort, car last taxed and mot'd in 2015, lines up with unpaid bills)

The garden was full of miscellaneous furniture, most notably bright red metal bus stop bench seats. No idea why

Just from this first room alone you really start to get a sense of how strange the last owners were...

The power being on really was the cherry on top

No idea if these paintings were from this artist that lived here, there were a lot though

The dining room like other rooms was a mess, but this holds a lot of the nice stuff, including loads of solid marble fireplace surrounds, seemingly not even from the house

The basement, where i spent a while plugging in a laptop to no success, but a tape recorder with a creepy woman singing on it

The first bedroom, note the cinema widescreen tv with ambilight on the right, smashed sadly, and this room being the main had few sex stuff but some interesting photo books

This was one of two bathrooms, both having an identical layout one behind the other

This bedroom held some wigs, jewellery and a rabbit sex toy amongst small boys toys

This room gave the sense of a brothel the most, the bed was almost entirely piled with lingerie, plus the table in the background had a glass chess table and a lava lamp, going for that aesthetic

That about justifies it, just to note again:

Do not go here, only reason this location is now posted here is because it is emptied and sealed.

All 266 Photos from this explore can be seen here:
https://drive.google.com/drive/folders/1ybH40qZ-RypH5cCohf-W6Ybu9APIDPYb?usp=sharing
Last edited by a moderator: Nov 21, 2019

Crikey that's a hell of a lot of stuff in there! Probably better that it's now sealed or the van brigade would be turning up emptying the place!

It appears they must have at least paid the electric :4_joy: , no doubt with sales in condoms for services. Great report, liking this despite someone losing their home.