First a little History [you all know it, but it's good to include anyway] ?

The Dispensary – the first public hospital in North Staffordshire – opened in Etruria in April 1804 and was funded in part by the Wedgewood family. It gave sick patients the chance to see an Apothecary for diagnosis and treatment. It also provided vaccination against the dreaded smallpox, thanks to the pioneering work of Dr Edward Jenner. Shortly afterwards the 11-bed House of Recovery was opened for fever patients, followed by facilities to treat general and accident patients.

The hospital continued to expand, due to a steady flow of general illness cases, accidents in the pottery, mining and iron industries and diseases caused by lead and dust. In 1819 it moved to a bigger site in Etruria. By this point it employed a small team of support staff, including a matron and nurses, and ran education programmes urging mine and factory owners to improve their safety standards. Thanks to new ideas about infection control, the building - surrounded by polluting factories - was increasingly seen as unsuitable for patients and was also at risk of collapse from heavy undermining. Eventually, the decision was made to move the infirmary to Hartshill. The clean, quiet suburb became home in 1869 to the North Staffordshire Royal Infirmary, which later merged with the City General Hospital to form the University Hospital of North Staffordshire – now the Royal Stoke University Hospital. Previously the hospital was known as The North Staffordshire Infirmary and Eye Hospital (1815 - 1911) as well as The North Staffordshire Infirmary (1912 - 1926).

The building closed down as a medical facility in 2012 as part of the super-hospital development at the Royal Stoke University Hospital.

The explore: Visited with David [ Scrappy ]. It rained, a lot. ?

The morgue was a bit of a let down as the slabs had recently been removed and placed in a nearby corridor in front of the fridges. Oh well....

On to the photographs, hope you enjoy: 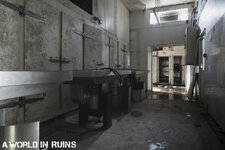 Looks like is becoming nicely decayed quite quickly, and great shots mate

Shame about that mortuary, didn't take them long to dismantle that!

Shame about that mortuary, didn't take them long to dismantle that!

Thanks mate ? There are some lovely peely paint sections especially some of the stairs. Yeah shame about the slabs, way too heavy to push back in place! ?

A great place with really nice decay. I especially like the chapel, the staircase with the peeled paint on the red carpet and the entrance hall with the black and white checkered tiled floor. Well captured.

Andy said:
A great place with really nice decay. I especially like the chapel, the staircase with the peeled paint on the red carpet and the entrance hall with the black and white checkered tiled floor. Well captured.
Click to expand...

It is a nice place and that red carpet staircase was a nice bonus at the end of the explore. I struggled to get up it though as i was knackered by then! ?

A shame to see they've moved all the slabs but I'm glad you got to finally see it! Lovely photos as always, thanks for posting

Looks like there's some nice bits to see, nicely done.

obscureserenity said:
A shame to see they've moved all the slabs but I'm glad you got to finally see it! Lovely photos as always, thanks for posting
Click to expand...

Thanks Kat and shame indeed about those pesky moving slabs, especially after the  complex entry! ?

Nice peely bits for sure and a good couple of hrs calorie burning trecking around, so win-win ?

That little chapel is lovely, you have captured it really well. lighting is mint ?

Urbexbandoned said:
That little chapel is lovely, you have captured it really well. lighting is mint ?
Click to expand...

Thanks a lot, it was probably better than i imagined, the chapel a little bonus?

Cheers mate, a good wander indeed and quite photogenic in parts

Fascinating history with some great and early photos to put it in context.  Good find.