So I'd never been to the ROI or Northern Ireland before this. As I write this, tomorrow I will be gone to Taiwan to take a sabbatical from England and exploring for a while, teaching English and learning Mandarin. The past few weeks had been dull and uneventful, so on impulse I decided to go for a short jaunt to Ireland to do some exploring, and what a terrific move that was. I always wanted to go, but I never made any plans to follow through. It was Camera Shy's recent reports that really got my attention and got me thinking about getting out to the Emerald Isle. The first of three successful explores, I give you Our Lady's asylum. I had no idea what to expect, which is pretty much the TBM way nowadays. I was in a land I had never set foot upon, all alone, out to do what I do best. I was pretty nervous, considering unlike in the UK trespassing can easily slip from civil into criminal territory simply by getting someone nervous in the process. But I carried on.

After a long, long train ride from Dublin and long walk in the rain, I see a grey tower: it's the asylum. I see cars parked inside, and dog walkers, but no fence. Security? Not thus far. However, there was something that got me on edge as I looked at the imposing administration from the front; the building was vandalised, but lights in the upper rooms were still on. An alarm box is visible from the front. Squatters? Alarmed? I didn't know.

It took less than 5 minutes to find a way in, but this is what got me really nervous; if entry is this easy, then to me there is a far greater chance of either running into or being followed by hostile types. I'm alone, so I can't take risks. I immediately take the stairs to the top floor, get myself immersed in my surroundings and get ready to take photos. I can't relax. 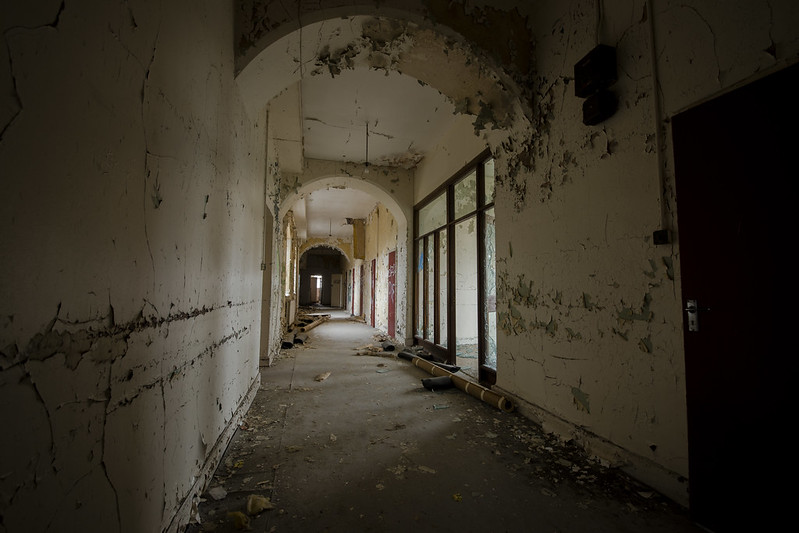 In the main staircase I do see some PIRs on each floor, but despite there being electricity in this area none were responsive. A relief. 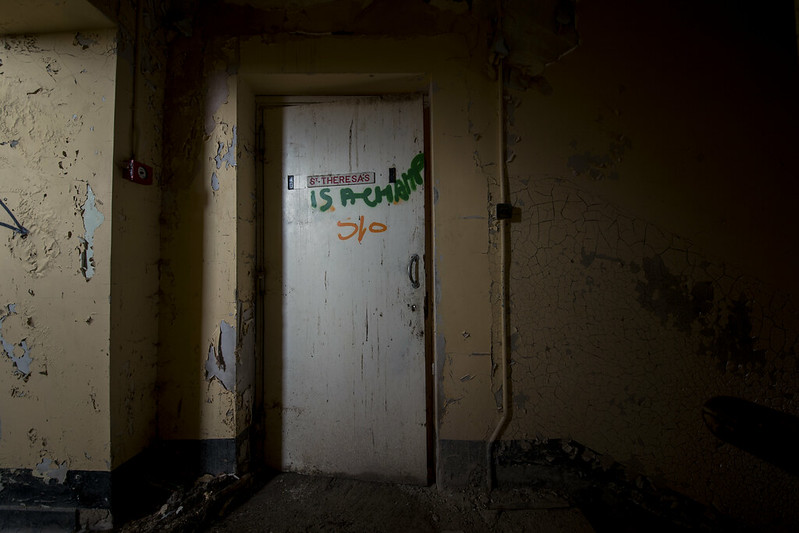 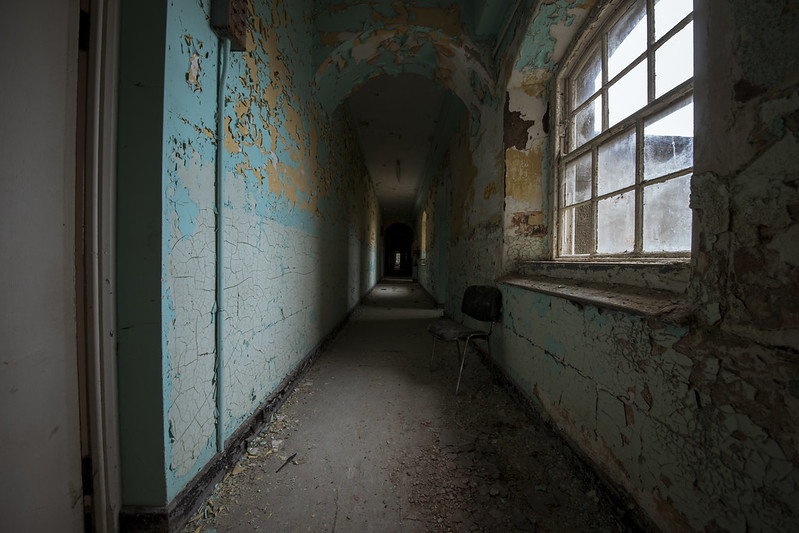 The building is stripped of almost anything that would indicate its former use, but is interesting because what it shows is the kind of conditions that patients were living in; very few (well, it's possible) seclusion cells/private rooms, instead cramped dormitories. The partitions have been removed in this room, so is not the best example but downstairs was different. 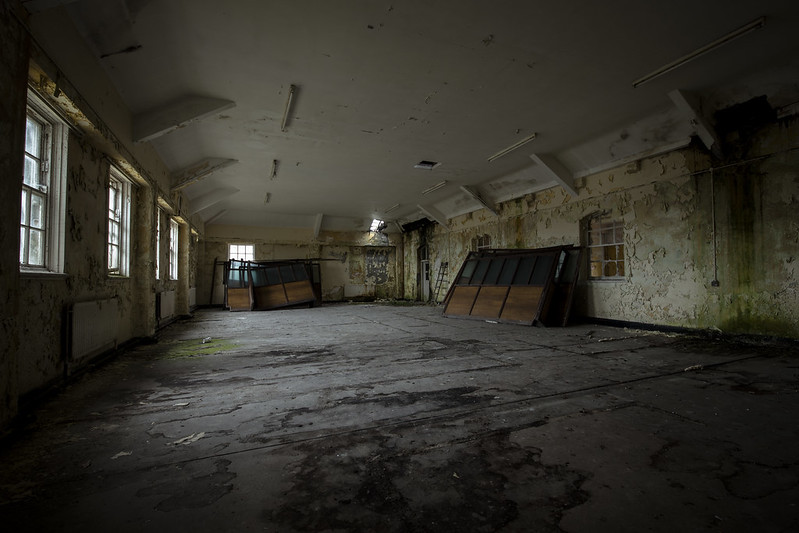 One of very few items remaining. The date of closure is said to be 2002, but who knows if this genuinely was the same as it was in July 1995. 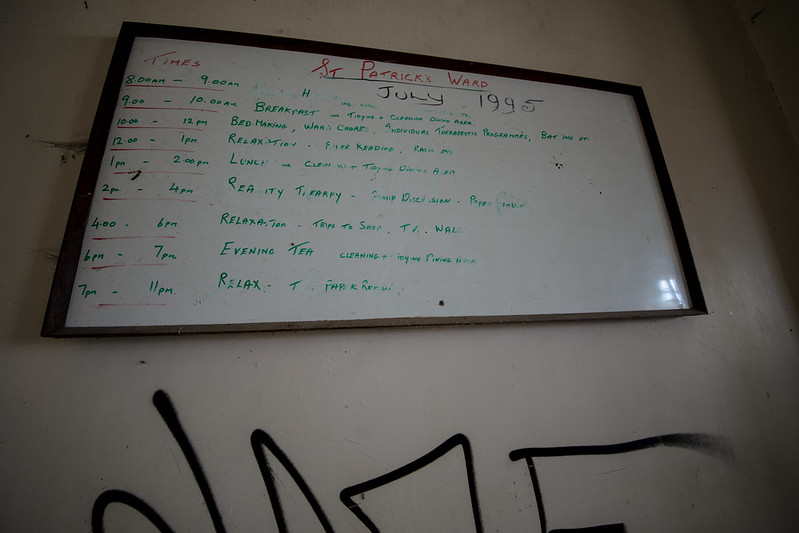 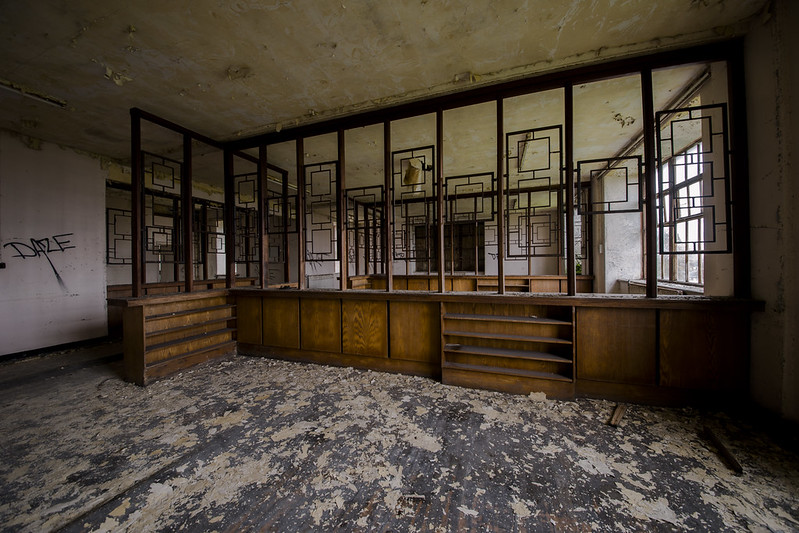 Despite the tagging and typical "haunted building" graffiti in places, the peeling paint and decay was spectacular to see. Some wards felt untouched. 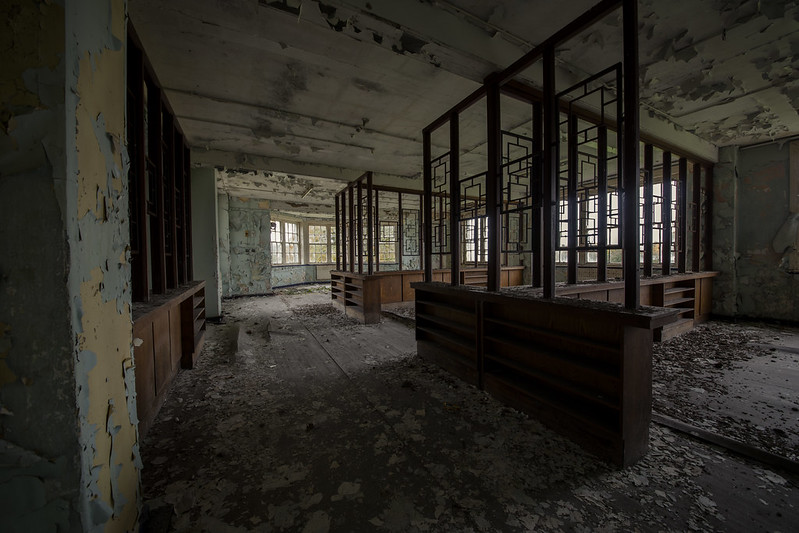 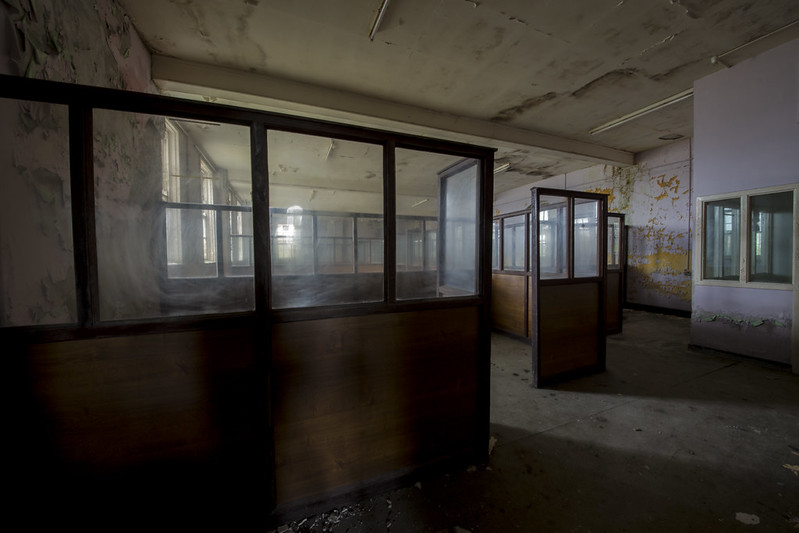 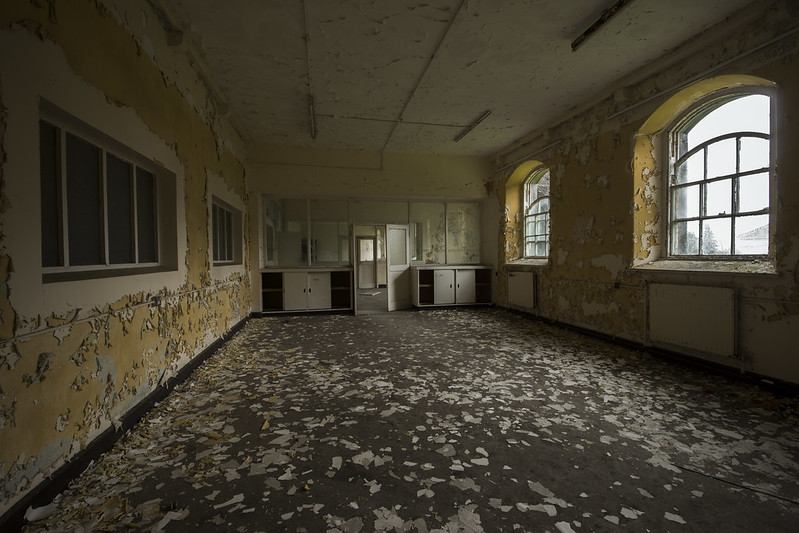 The main hall in the complex, very austere and minimalist. 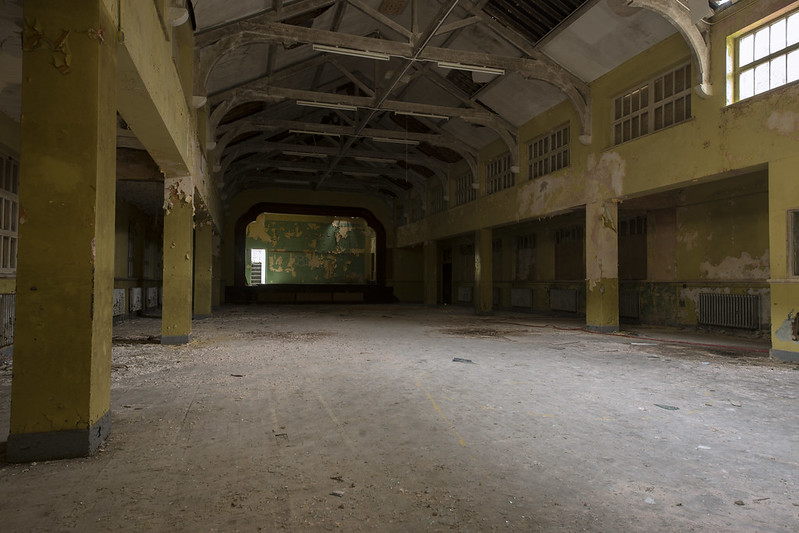 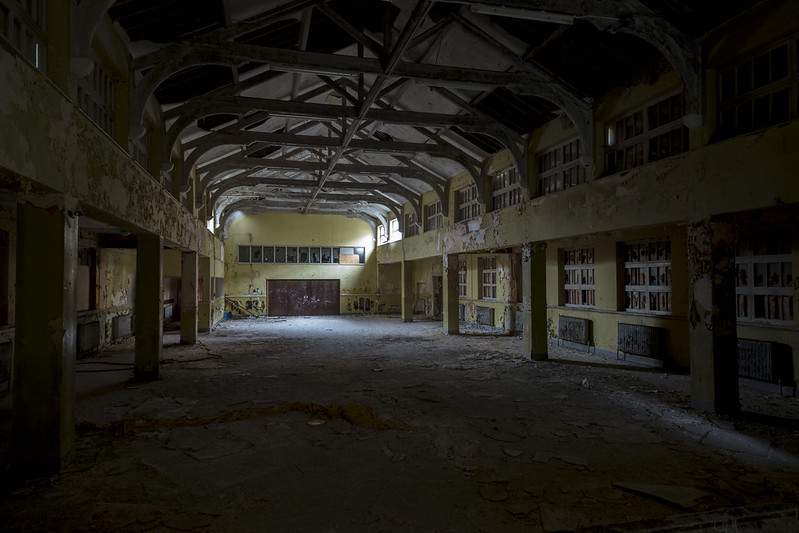 From here I went on to look through the industrial side of the hospital, hoping for a mortuary but found nothing of interest. I returned to the darkness of the ground floor, in search of what more there was to find. The architecture was no different but there were some interesting murals based on Irish folklore and tradition. 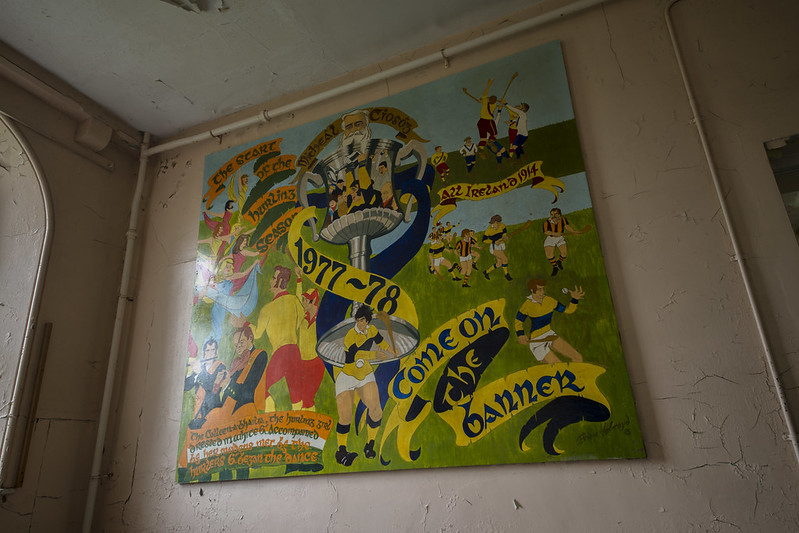 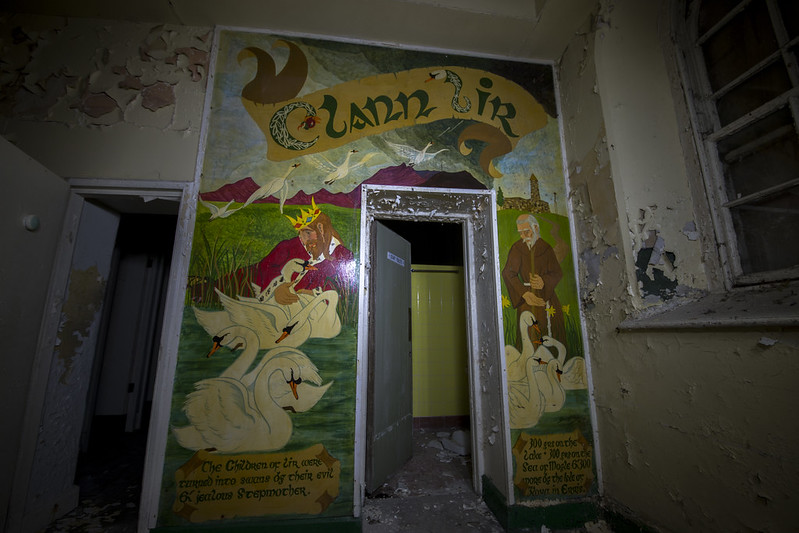 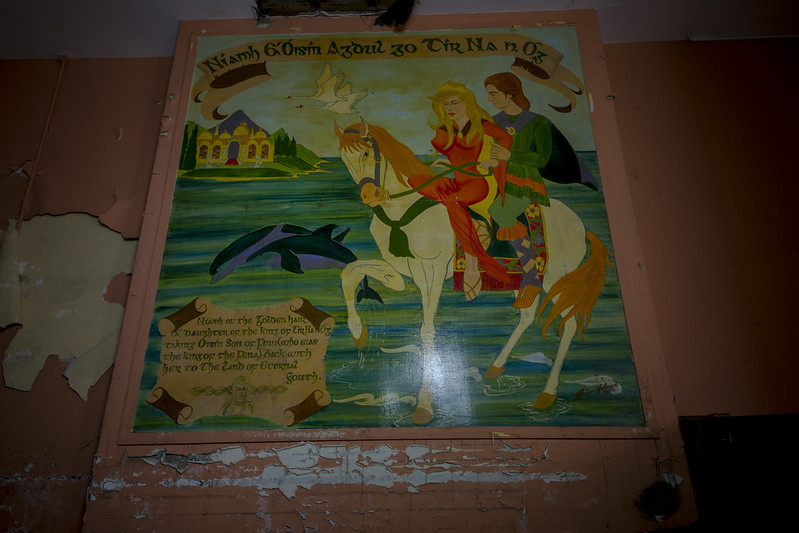 I'd seen everything I needed to see in the hospital, so I swiftly made my way out and round the back in search of anything that had eluded me before. Alas, the rear buildings were reoccupied, and those derelict well in view of those inside. There was little left to see, and nothing that caught my eye, so I made my way off to the chapel which was locked.

The buildings are listed, and presently up for sale. I honestly don't know what the the future holds for the site now, but it won't take much to turn the place into a Talgarth-esque ruin. Time is running out. Stay tuned for part 2.

The murals in these places always look a little out of place, but give a really nice addition to the character.

Nice to see a different asylum and great write up as usual. Await part 2 with interest!

Another cracker, looks an awesome place. Thanks for showing us these mate

Really liking these! Your pics really capture the place nicely

More and more places appearing from potato land and is nice to see something different for a change. Like this place so cheers for posting mate