In 2017, during a holiday to Japan, I visited the Hakone area, south-east of Mt Fuji, via day-trip from Tokyo. One of the stops was Mt Hakone – accessed via cable-car from lake Ashi.

Due to timing, we only had a few minutes a the top of Mt Hakone. This was my first encounter with the eerie - Komagatake Ropeway top station. 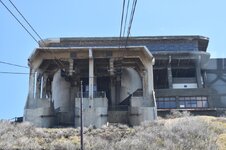 (Above pic is a screenshot from Google Maps street view)

In 2019 on another visit to Japan I decided to make a point of visiting this mountain again – to get close look...

In 2017, only the ground floor of the station was open to the public, holding only a ticket counter, small gift shop, a photo booth, and some vending machines. The stairwell to the second floor was blocked off, and the sign for the bathrooms was covered up.

This enormous concrete block, perched on a cliff edge of Mt Hakone serves as anchor point for the cable car, and looks out over lake Ashi.

Its showing the signs of its age. Wikipedia says it opened in 1963.

It feels strange that something this run down is still in operation...

In 2017 – I desperately wanted to have a look upstairs of the creepy building, but didn't want to risk trying to sneak past the stairs from the lobby...

In 2019, the blocked sign was removed from the stairs!, and I guess they opened up the bathrooms on level 2. As soon as we entered the lobby, I decided to dash for it... my wife happily exploring the gift shop downstairs.

The blockade on the stairs was now moved to the second floor – with only the bathrooms accessible.

With no tourists on this floor yet, I figured – this is it - now or never!, and I jumped over the boom and headed upstairs – careful to listen for any noises from upstairs...

My heart was pounding as I snuck further! I had to stop shooting a bit as some tourists just around the corner from me came up the stairs to visit the bathrooms... (noises from camera shutter...)

As I went higher, you could see that the walls of the upper floors were never even painted. I wonder if they have ever been in service since 1963!

I guess when they build this behemoth, they envisaged a restaurant and maybe visitor centre, maybe accommodation in the upper floors?

A wooden trimming on the stair handrail as you approach the top floor.

A chair against the wall,and some colourful stickers against the glass doors. The only colour in this dreary building.

I'm guessing one of the top-station employees comes up here for their lunch break...

The top floor is basically empty, except for some communications gear that was probably installed much later.

After this I snuck back down. I regret not checking if any of the bathrooms were open.

Besides this top station building, the only other structure visible at the top is Hakonejinja Mototsumiya temple.

The temple shows no signs of life...

On the way back down: 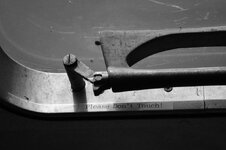 As we were ascending the mountain, from the gondola, you can see some wooden cabins in the forest below... Some of them looked a bit worse off... I decided to go have a look when we came back down...

There was a sign board next to the road leading up the the cabins – The Hakone Prince Dog Cottage. It is spring – sakura season.

The cabins near the bottom of the mountain were still looking ok – they were probably still being rented out, but there were no signs of any visitors or staff.

As you go higher up the mountain, it was clear that some of these cabins have not been in service in years. Completely overgrown, full of moss, algae and weeds.

A tree growing out of the front porch suggests the age of disuse.

Peering through the mosquito netting, I can see and old CRT TV and VCR

There are downed power lines and more trees. Some of the side roads leading to the cabins are completely overgrown. I don't think anyone has walked down there for years.

No more Mario-cart for you

Looks like this one has a fridge, that probably held those two tubs of whatever.

After this encounter, my first experience in “urban exploration”, I started noticing, in the town where we stayed (Atami), and along the roads of Yugawara which we drove through, there were plenty of eerie relics-

and many run down and abandoned places-

I made a point to explore further...

A roadside visitor centre / rest stop, found across the road from a toll-gate. No idea how old this is – its definitely not in operation anymore. No name to it in Google maps.

I pulled off to the side of the road and walked across the empty parking area. It had a crazy amount of parking space. I don't think it was ever full.

There was a small van parked out back, and a guy messing around. No idea how it got in – both entrances were barred.

Mt Fuji in the background

There is some underground structure as well. Looked too dangerous to explore.

The upper structure, attached to the mountain, leads you to go further up

Very overgrown up there. I couldn't get over the bridge to go further up.

The bridge lead over an artificial waterfall

I was making a lot of noise cracking through the bamboo... I ducked down for a bit while a traffic warder appeared.

Overgrown pedestrian walkway. There is literally nothing on the other side – just the steep mountain. I wonder how many people have ever crossed that bridge.

I think this is the “town office branch” - maybe a local council building. Only half of the building is still in use. The other half is piled full of junk.

A walkway over the road-

Leading to a school – also abandoned...

This school really intrigued me – I thought there might be some good photos to be had.

At the point, as I entered into a courtyard area, there was a car with a guy in it. He saw me to I just waved and pretended to be a dumb tourist. I continued to take a few pics, but he came out of his car and followed me for a bit...

I pretended to leave. The guy went back to his car – then I doubled-back to check out the gym!

Not being able to explore this area further, I left, however, later that day I noticed on Google maps that there is supposed to be a pool at the back of the school! - and also there is a road going up towards the back. Since we'd be travelling back past this area, I decided to give it one more go.

At the back of the school is a forest, leading up a mountain. The road stops quite a while away, and you have to make your way through the forest towards the school. Lucky for me, a path was cleared here, leading parallel to the school. I guess to prevent forest fires from reaching the school.

First obstacle was this ditch or embankment. About 1.5m deep.

As I got near the back of the school where the pool was supposed to be, there was a big ravine. I had to go down there, over some embankments and down a further set of retaining walls.

Everything was wet and covered in moss. I wasn't sure if I'd be able to climb back up the walls. It was pretty quiet out here. Only me struggling through the bamboos.

I reached the pool!!

There was a thicket of bamboo growing around it...

An abandoned hotel on the shore-

When we got back to the small town to return the rental car, I spotted this place walking to the train station-

Wow that was an interesting read, looks like a fun trip!

Good to see something different. Looks like a cool place to explore. Nicely done and thanks for sharing!

The_Raw said:
Good to see something different.
Click to expand...

Thought the same, nice collection. In particular I like the overgrown hotel (or whatever the red building formerly was).