First report in a couple years, still been getting out and about but just been very busy with other life admin for reports, got a day at home on the sick twiddling my thumbs so thought i would write summit up about our trip to red sands last year. Did the trip with bigjobs, paradox, riddlers, FB, slayaa and a few other guys who i think are registered but post on the forums even less than me so god knows what their usernames are.

The Maunsell Forts are armed towers built in the Thames and Mersey estuaries during the Second World War to help defend the United Kingdom. They were operated as army and navy forts, and named after their designer, Guy Maunsell. The forts were decommissioned in the late 1950s and later used for other activities including pirate radio broadcasting. One of the forts is managed by the unrecognised Principality of Sealand; boats visit the remaining forts occasionally, and a consortium called Project Redsands is planning to conserve the fort situated at Red Sands.

In the summers of 2007 and 2008 Red Sands Radio, a station commemorating the pirate radio stations of the 1960s, operated from the Red Sands fort on 28-day Restricted Service Licences. The fort was subsequently declared unsafe, and Red Sands Radio has moved its operations ashore to Whitstable.

Previously, forts had been built in rivermouths and similar locations to defend against ships, such as the Grain Tower Batteryat the mouth of the Medway dating from 1855, Plymouth Breakwater Fort, completed 1865, the four Spithead Forts: Horse Sand Fort, No Mans Land and St Helens Forts which were built 1865-80; and Spitbank Fort, built in the 1880s, the Humber Forts on Bull &amp; Haile Sands, completed in late 1919, and the Nab Tower, intended as part of a World War I anti-submarine defence but only set in place in 1920.

There are seven towers in the Red Sands group, at the mouth of the Thames Estuary. These towers were previously connected by metal grate walk-ways. In 1959 consideration was given to refloating the Red Sands Fort and bringing the towers ashore, but the costs were prohibitive.[18] In the early 21st century there were threats that the fort could be demolished so a group called Project Redsands was formed to try and preserve the fort. It is currently the only fort that can be accessed safely from a platform in between the legs of one of the towers.[

The explore
Wanted to do this since seeing bigjobs and FBs trip out their on the kayaks through the mist, if you havent seen it already definitely well worth a look, makes for a better read than mine will anyway! We didn't fancy the kayaks this time so we all got the outboards out and set sale with some horsepower behind us.....untill mine died, i say until it died, it never really got going, overheated and cut out in a puff of smoke in the first 5 minutes. That was my first outboard, i had a smaller backup outboard just in case of any such incidents as the first bigger outboard i had literally collected off ebay on the way down. anyway long outboard story short, i got towed out by bigjobs, that was once we eventually got in the water, everyone else had already been out one night but me and sarah were late to the party so we came in first thing. i say first thing, we were late to meet up with jobs and ended up chasing the tide with all the gear, would get half the gear out to the waters edge then by the time the other half was in the same spot the bloody tide had moved another 10m! We did eventually get in the water and headed out to the forts.

On the approach to the sea fort we passed through some leisure boats circling the forts taking tourists out to see the forts, no doubt all wondering what the hell was going because just as we pulled in the riddlers came zipping down the rope and landed in FBs rib like a pro navy seal. We got the boats tied up and ascended up to the forts to crack open a beer and enjoy the views! FB and riddlers decided they were going to have a pop at getting up one of the other struts to see if they could get a line across vertically with the crossbow to sort out a traverse, they got the line across but then beers and food happened so no one went for the traverse. Had a lovely evening on the forts, amazing sunset watching the freight ships chugging past. FB and jane went for a jolly out to the wind farm Time for tea and bangers and mash was on the menu but i had forgotten my camping gas, luckily i managed to bodge my camping stove onto a big bottle of calor gas which had been left on the fort, bit of rubber hose a few cable ties and a bit of dismantling on the burners part and the bangers mash was a success!

We woke up to fairly choppy waters, made for a rushed and slightly tense departure in the morning, the choppy waters had snapped one of the lines holding the boats in position ready to ab down into. The boats were now drifting about 10m away from the bottom of the ab rope. cant remember who it was now, either fb or riddlers had to ab down and try and drag all the boats over back in line underneath the ab rope and then get a line out to replace the snapped one. We got lucky with the rope that did snap, if the other line had snapped the current would have dragged the boats into the struts and the barnacles would have torn the boats to shreds and we really would have been up shit creek. oh yeah i forgot, at this point we had yet another dead outboard! the riddlers pull chord had snapped off the day before, i went on the hunt round the forts and found a rusty old socket set in an old toolbox so the first job once back in the boats in the choppy sea was for law to try and get his outboard sorted. luckily the sea did begin to calm down as we were all abing down into the boats and we set back off without any major incidents. It was a big realization just what a relentless and unforgiving force the sea can be, as an awesome and adventure as this is its one that can go wrong very quickly. There had been plenty of prep and investment gone into this adventure, we made sure everyone had suitable life jackets, radios, flares, everyone had rope experience, big help having someone who knows their way around an outboard engines etc etc, its certainly not a walk in the park operation! big thanks to jobs, for getting everything all rigged up prior to our arrival, it sounds like you all had a rough time of it getting up there the first night! 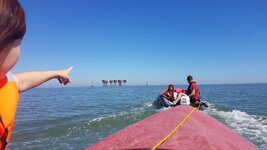 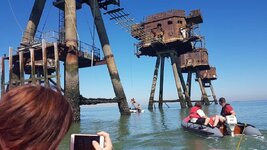 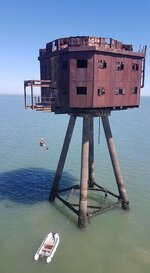 Right tools for the job. 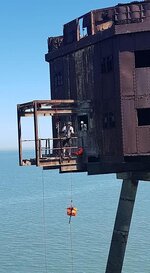 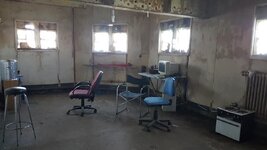 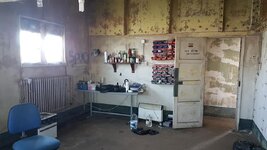 bed for the night 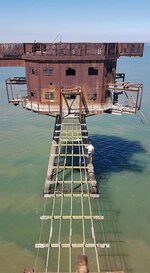 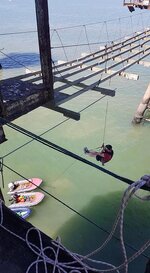 The bangers and mash will go on! 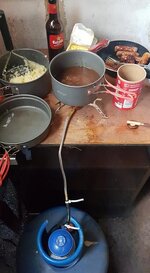 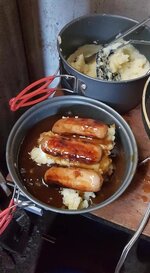 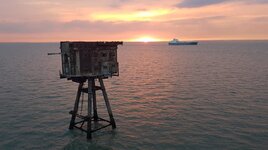 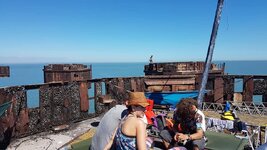 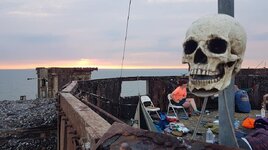 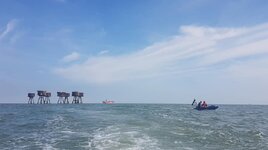 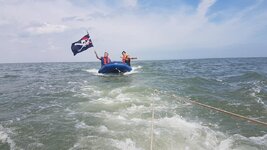 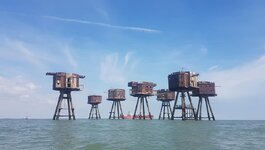 Thanks for reading and bigger thanks to everyone who made it happen. see you again in 2 years for another report!

That's a mad adventure man, cracking pics to go with it too, nice one

Sounds like an awesome adventure, cool place to watch the sun set  :27_sunglasses:

Nice to see this posted on here man! What a cracking adventure, props to you all for going and doing this.

Never tire of seeing pics from this explore,nice one mate

Yes mate! Glad to see you've posted this one up. Looks like an incredible adventure and props to everyone involved.

That's really great! I would love to see it myself. So far, unfortunately, I never found a way to get there. But I wouldn't be able to climb up there either.

Haha what a mission! Worth it though

cheers guys, certainly was a fun mission, felt like being in metal gear solid ?

except with less invisible cyborg ninjas and more bangers and mash.