‘But it was just a part of the story…’

This story starts in the point where the last one (http://www.oblivionstate.com/forum/showthread.php/9412-The-Library-and-Forbidden-Archive-July-2015) ended … more or less.

It is again the same winter Sunday or Saturday … (don’t remember now maybe it was the 7th or 8th of February 2015 - the photos come from much wider range of time), the day when we reached that location for the first time. It is the day in which we reached the top floor of the building and we discovered the library, reading room, project/drawing rooms and archive. But now … there was something more.

We are standing on a dark corridor (me and my two friends). Standing in front of a door.

The door was two sided, wooden, quite massive. On the left side there used to be a window with an windowsill. Now the window was sealed with a massive plank attached by nine or ten inch nails. There was no door handle on the door (someone just removed the old one). It was quite obvious that someone wanted to sell-off that part with a lot of effort.

We could also notice that the lock in the door was closed from inside and the keyhole (of quite modern lock was damaged). At some point we wanted to give up, At that point it took us almost an hour to find a way to enter. The door was wooden but because of all the moisture the wood on the outside was soft.

After some time we could see the deadbolt. Luckly the lock was old, the deadbolt was not locked in a fixed position and we could move it back.

Than we used that door handle I found, located its bolt in the hole. This allowed us to move the latch bolt back. Now we needed just a bit of leaver to move the door. Because of all the moisture it was just a bit of stuck.

Maybe after more than an hour we could get inside. It was something we couldn’t except from outside. Something we were not anticipating to see in such building.

There was a scent. Chemical, unpleasant scent. We were entering a long abandoned laboratory.

What we discovered was a set of different rooms connected with one corridor.

On the left there was a small social room.

Items scattered around here and there. It all looked as if no one moved it from long time. Everything just as if left in a hurry.

Back to the main hall. A door on the right. A small board with a sign ‘Angle measurement’

I remember Iv entered a quite big room. First what I noticed just made my feet soft. All this equipment, wasted, rusting, forgotten. How much of state money had to be here in this building …

A meeting room by which we I could enter another room (here visible on the left). 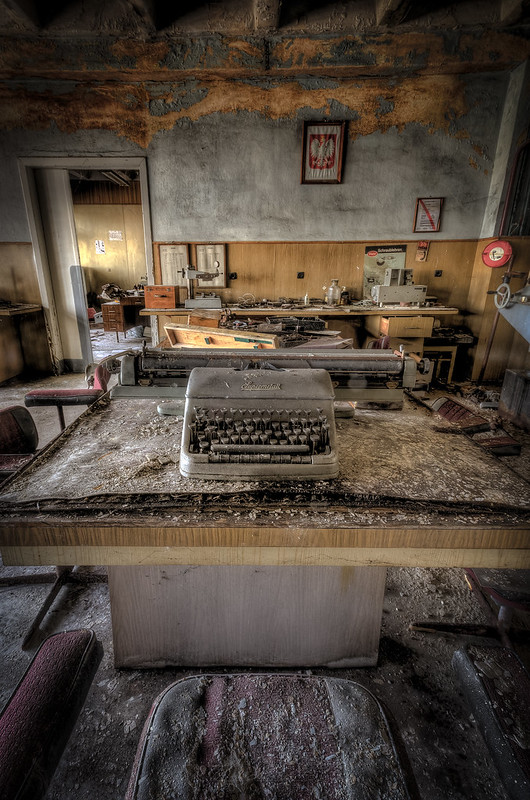 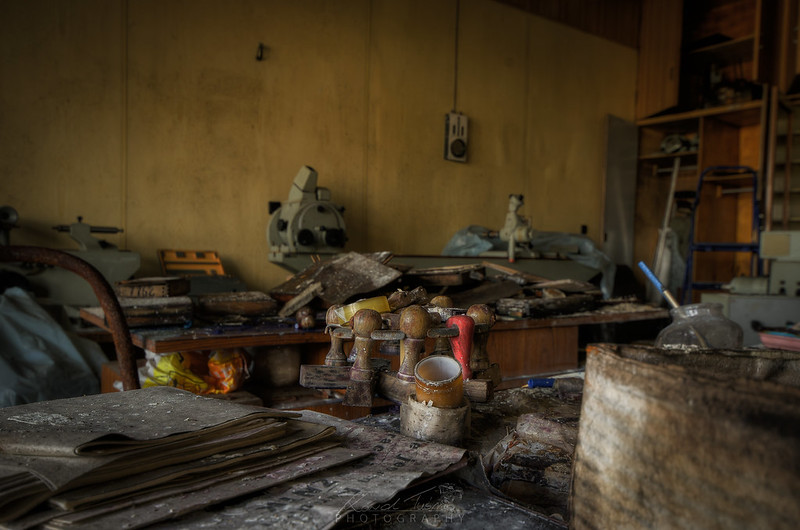 There was also a lot of different documents, furniture, wet, now a bit rotting. All the tools covered with rust. 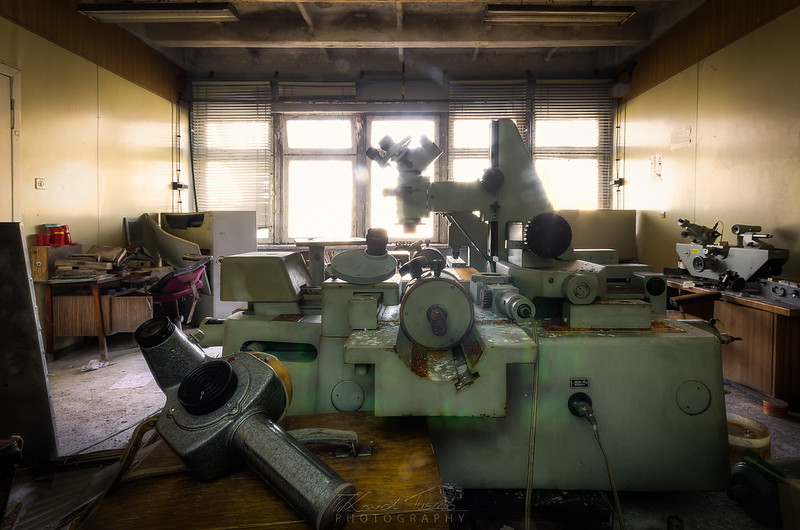 But of course what was most important (for us) everything was not moved here since the workers abandoned this place. There was no dust holes, no footprints. No signs of activity of any visitors. Just the sign of time. 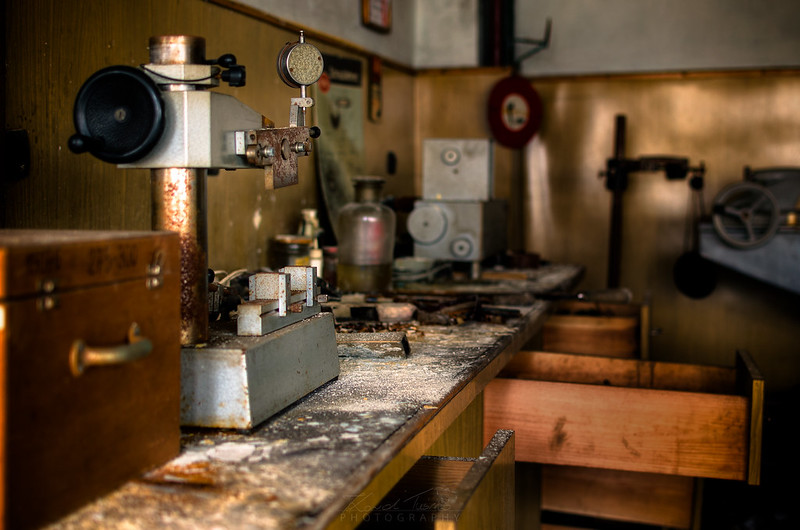 And as in the library/archive/reading room because it was the last floor we could see that there was water dripping through the ceiling. Someone tried to place some kind of containers for water but without maintenance … 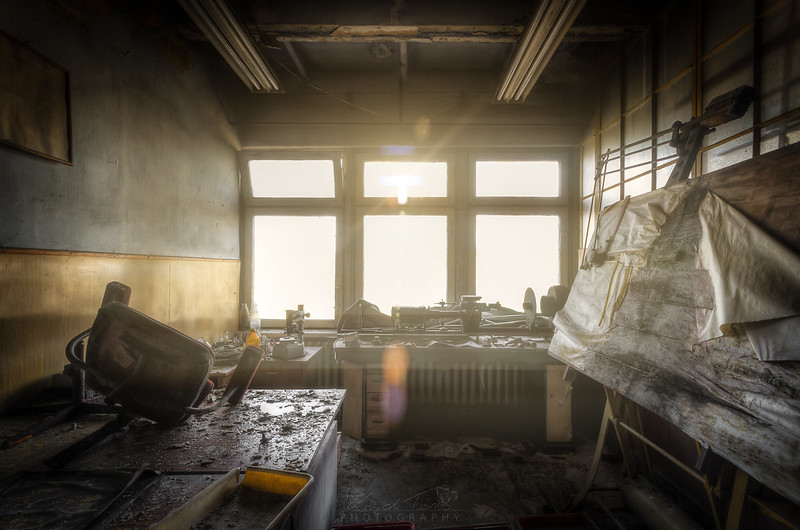 But until then we didn’t found the source of that chemical scent.

We had to go a bit deep in to the unknown.

Next door on our right. The scent became almost unbearable. Now we started to get to the source.

Water dripping through the ceiling, chemical moist in the air.

Some of the older containers broken with their insiders on the floor. As a graduate of biotech I decided that there is not much health risk and that we can proceed. 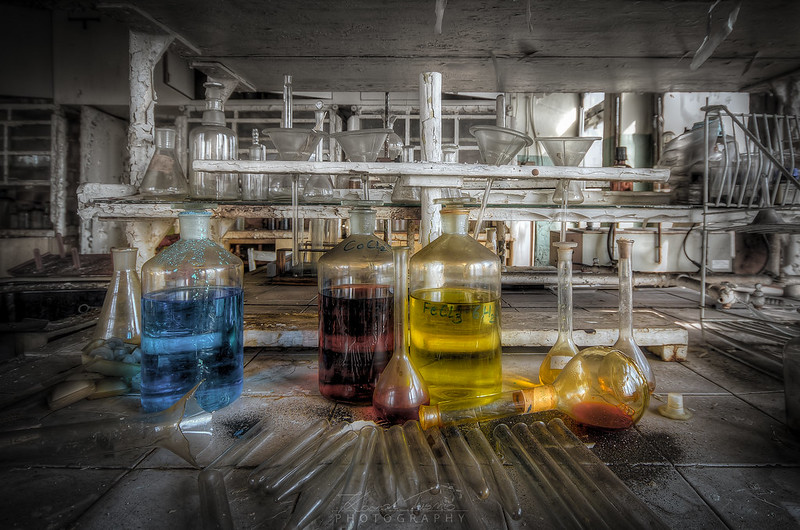 Chemical glasses still on the benches, full with different content. Acid that was mixing with the air made its job allowing everything to corrode even faster. 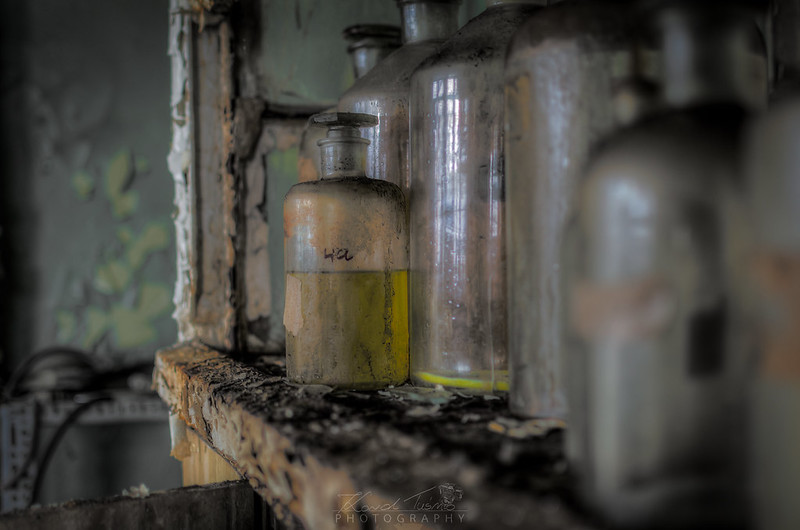 What was mostly stunning is that if any one of use moved an object we could already see it. A white patch, free of dust. It had to be a decade since no one visited this place.

Everything as if the time had stopped. Objects, equipment waiting to be sued again …

What made me almost cry are those high sensitive scales that had to be really expensive at some time.

We were able to find a lot of things there. Old documents, photos of workers, undeveloped films. Some of those things could be saved. 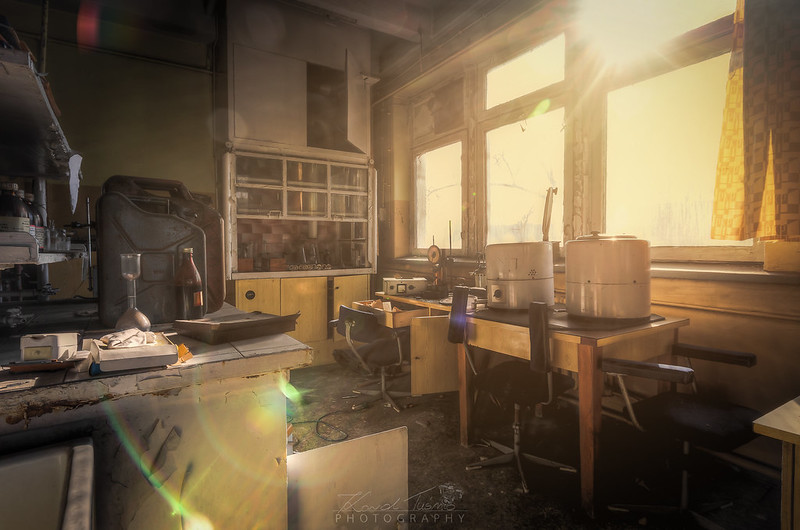 And again there were some many details. So many things that just standing there made my head hurt.

I remember that when I came that day back to home I was totally exhausted. The amount of frames, details that this location had to offer was mind blowing. At that point we decided not to publish any photos. We wanted to gather as much material from this place as possible. We wanted to record it, film it in the state we discovered it that day. It was a long and hard work …

This is a taste a things to come

When it’s done .. you will know

As the last time more photos can be seen in following albums:

Very nice mate, those jars of acid are quality colours Good job on documenting everything, any history on the building? including it always makes it a little more interesting.

That's very cool mate. Can you please add the approximate monthand year of when you visited to the title? Just click edit post at the bottom, then 'go advanced'.... Cheers

AMAZING!! Love a derped lab and this is a BELTER!!

Yes to this, lots to see in there, love it

Amazing! Thanks for sharing

This is a perfect location to find - untouched and just lots of natural decay. Jackpot!! :beer:

Very interesting too that it follows on from the Laboratory set you posted recently.

I'm really liking this, so much to see. The jars are awesome! The second shot is great!

Fab location, thank you for sharing!!

This is beautiful! I love your photography style and this location is excellent! thanks for sharing!

Excellent report really enjoyed reading that and so many good pics well done on this one..

damm that is a great set !!

The albums have been updated with not-published so far photos.

In few days I will revisit this location and I will try to share whats left of it.

For the moment complete album from this place can be found here:

or with better quality: