The Library and Forbidden Archive - July 2015

(it will be my first ... so lets make it with quality)

The archive and forgotten library

It was a cold winter day. Because of the short day I decided to meet with my friends and explore some local industrial zone. We were vising it since few weeks already. Building after building. Because the place was guarded (it still is) we were not in the hurry. Sometimes entering different buildings took us some time because the entrance was not that obvious. Once in we had a lot of time to document what we will find.

Little that we know what awaited us that day particular day.

In some way we were not expecting anything interesting. We already knew that most of the buildings are just pure industrial/production halls.

That day we decided to enter one inconspicuous three floored building. Since it was quite close to the guards office we didnâ€™t wanted to risk. With all caution we tried to find some entrance to that building. Nothing. With all the desperation we tried the windows. At some point one window at the height of 2 meters gave in (we didnâ€™t brake it, it just opened).

We entered the building. Usually when you are inside you are safe from the guards but since we didnâ€™t know what expect we were still careful.

First we found a view that was just expected. Raw, industrial.

A corridor that opened to a small hall and some workshops.

Since the building was three floored we wanted to see what is upstairs. We found a staircase and started to climb the stairs. From old stained by dust windows we could see guards patrolling the area. Soo lucky we were inside. After we reached the top floor we noticed that the place looks like there was no one since a long time. Dust, no foot prints, a grating door closed by a rusty padlock. Since it was the top floor we could see that the water was leaking through the ceiling. Now we noticed that not just the padlock is rusty but the grating itself also. With just a bit of force it gave in â€¦ giving us just enough space to enter.

Another corridor and then â€¦ room after room we noticed where we are.

First what I have noticed was a reading room. Desks and chairs not moved since long time. No footprints.

Just next to it a library. Books wet with water dripping through the ceiling.

I could notice that someone tried to save those books by covering the bookshelves with some kind of foil. The efforts went in vein. Books covered with fungi, wet, decaying.

Moving on to another rooms we noticed that its not just the library and the reading room here.

Someone tried to stock them up, maybe to move them away/save them. In the end they just started to rot.

Moving on we discovered what were those documents and where did they came from.

The library and reading room were attached to project rooms. Once fantastic now â€¦ 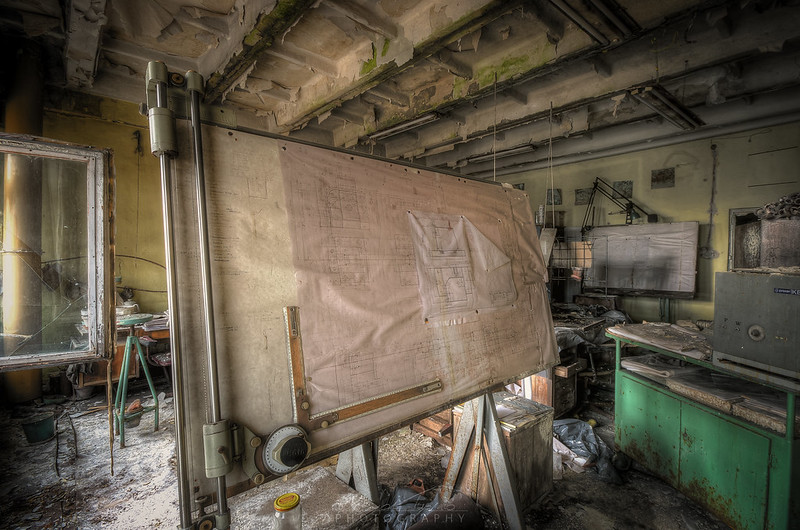 At the end of the corridor we found an archive. A place where all those documents were stored in the most proper way.

There were two type of archive rooms. One old archive with old wooden furniture.

Containing different plans and graphs, projects of the things produced in the industrial zone.

There was also more modern part of the archive. This time more steel/aluminum 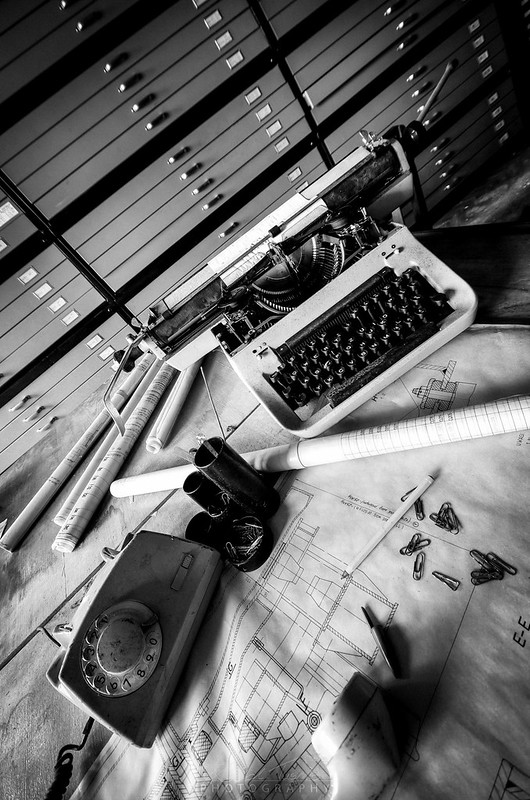 In the end we were vising this single location for almost 2 months. Every Sunday or Saturday checking all the details, gathering photographic material. Unfortunately such places canâ€™t be a secret forever. Since the moment other local explorers found it location it started to decay even faster.

More (best photos selected) from this location can be found here:

and if you want you can also check my fb â€¦

Great looking images mate. Welcome to the forum and looking forward to more quality reports like this from you

That's awesome man! Thanks for sharing

Very nice looking forward to more reports from you ..

Excellent stuff, enjoyed the pictures and especially the write-up. Welcome to OS

Shame that after few months it's completely trashed... been there in june this year... and i was dissapointed... :/ Anyway good report mate ! Some awesome shots there ! Thanks for sharing

As you already know Marcin after making this place more or less public the location went to wrong place. To much people started to visit it and in the end even the scrap metal collectors got interested. I haven't been there since few months already (have to go there and check again), but what I see from photos here and there ... the location is really the shadow of the place I used to know

Wow, brilliant first report, love this and thank you for sharing

Additionally you can also visit a fanpage of mine friend

That's a treasure to find. We've got a lot to explore in Poland. Need to go for a little stroll when I visit next Great report!

Hiya, cheers! I signed up ages ago but couldn't remember my details, so finally, here I am

Wohhhh!!! nice set of a amazing place! Thanks for share, man

The photos are pure quality, the one of the stockpiled documents with light from the left is amazing! And great write up to give the feel of how you discovered the place. A real shame its gone downhill but I'm looking forward to more reports