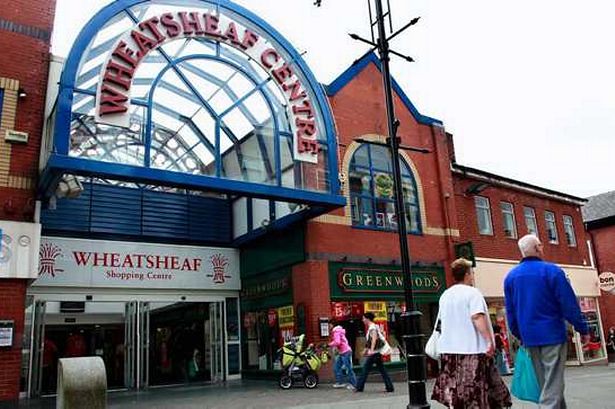 The Wheatsheaf Shopping Centre was a purpose built shopping centre constructed in 1991, totalling approximately 15,130 sqm of accommodation, including a two storey library at it's peak, arranged over five levels. The centre was home to over 15 big name stores and independent retailers, as well as housing offices for Tony Lloyd MP and the Rochdale BID. The centre lost numerous key anchor tenants since 2017 – Rymans, Wilko’s and in 2020 alone - Argos, BrightHouse and Bargain Buys vacated; with New Look and Select in CVAs and Peacocks in administration, the financial viability of the centre was not sustainable. The centre closed during the first lockdown, re-opened in June and then closed again in November because its occupiers were all classed as non-essential retail. Since re-opening after lockdown in June 2020, footfall had been tracking at an average of 45% down year-on-year and the following lockdown will impact these figures further. During the second lockdown in Winter 2020, the mall closed again and an announcement was made that it would not be re-opening afterwards. It is mostly largely vacant however there are several tenanted units fronting Yorkshire Street including British Heart Foundation, H&T Pawn brokers, Craze and Greenwoods which are income producing. Willmott Dixon the contractor working on the Riverside scheme also occupies the internal loading bay in the centre.

We were fairly surprised that this hadn't been done, particularly when we made it inside to be greeted by some classic shopping centre architecture featuring an enticing atrium and ornate window. It took a while to crack, and the security check the camera footage every day, tackling anything that could be used to make your way within the complex. Thankfully, they didn't catch on to the route we were taking and we had a suitable way in the few times we have revisited in the last month. 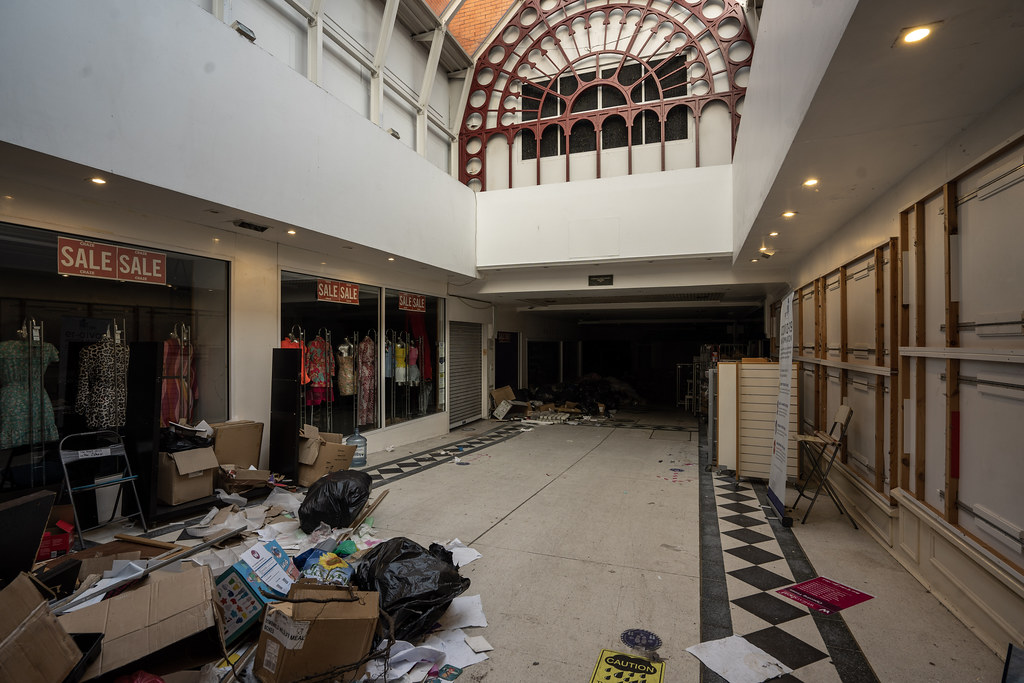 Main entrance. To the left is one of the two tenants still active, both utilising their street facing entrances. 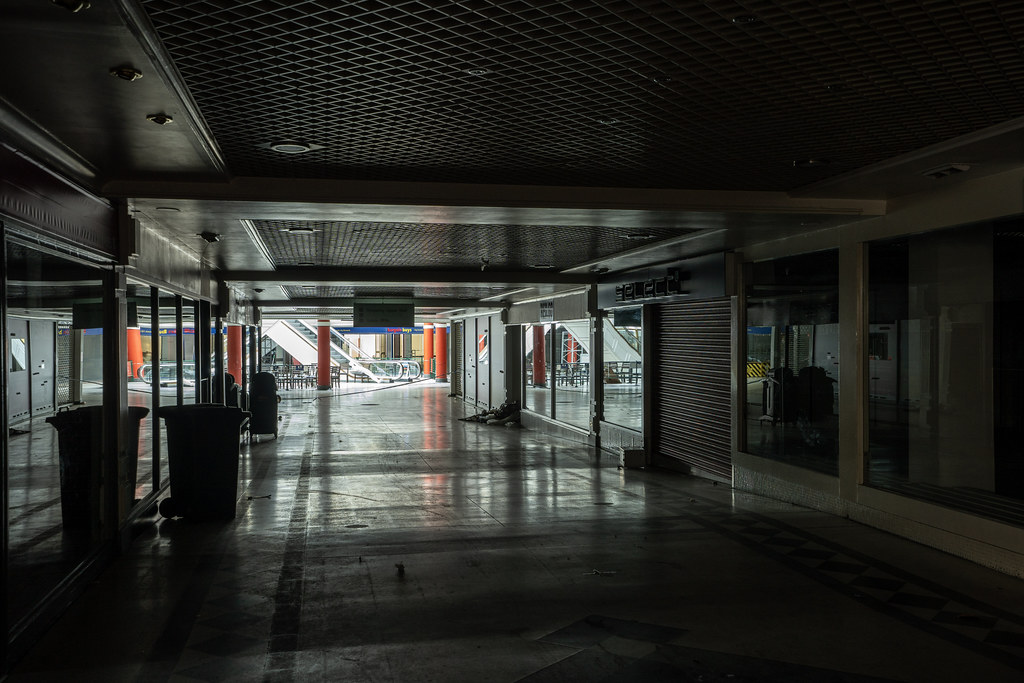 Working our way towards the central atrium. The shops were mostly stripped and uninteresting. 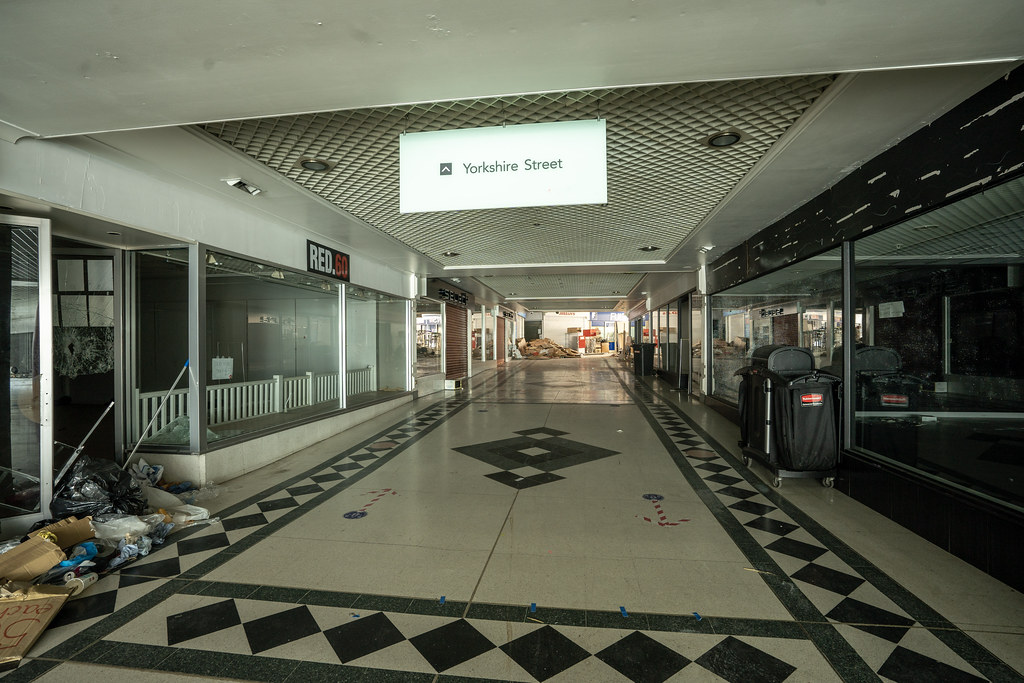 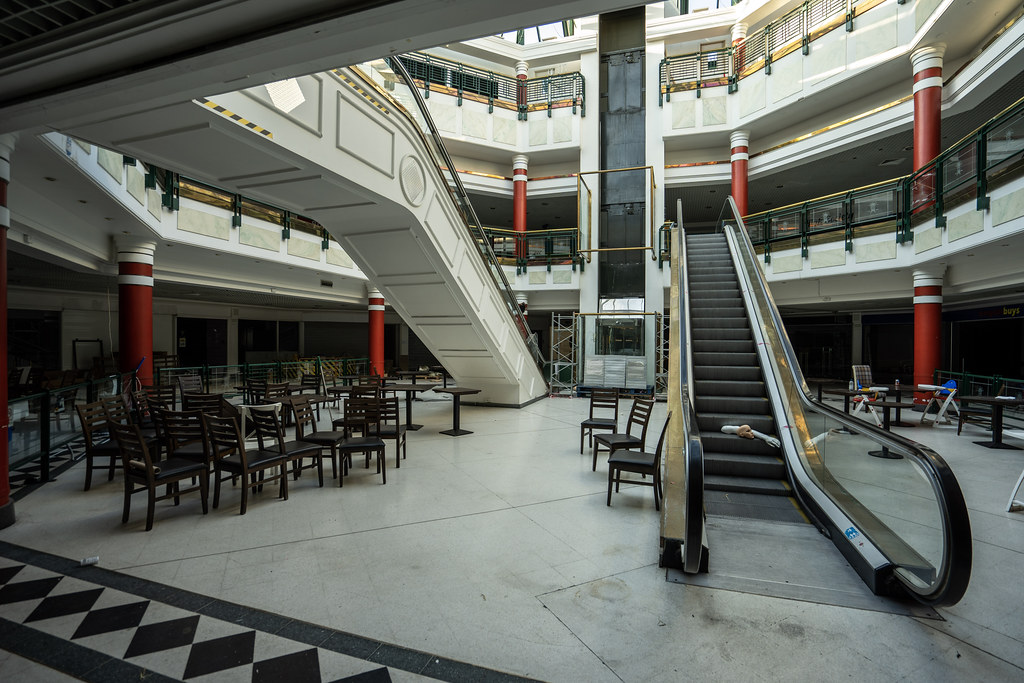 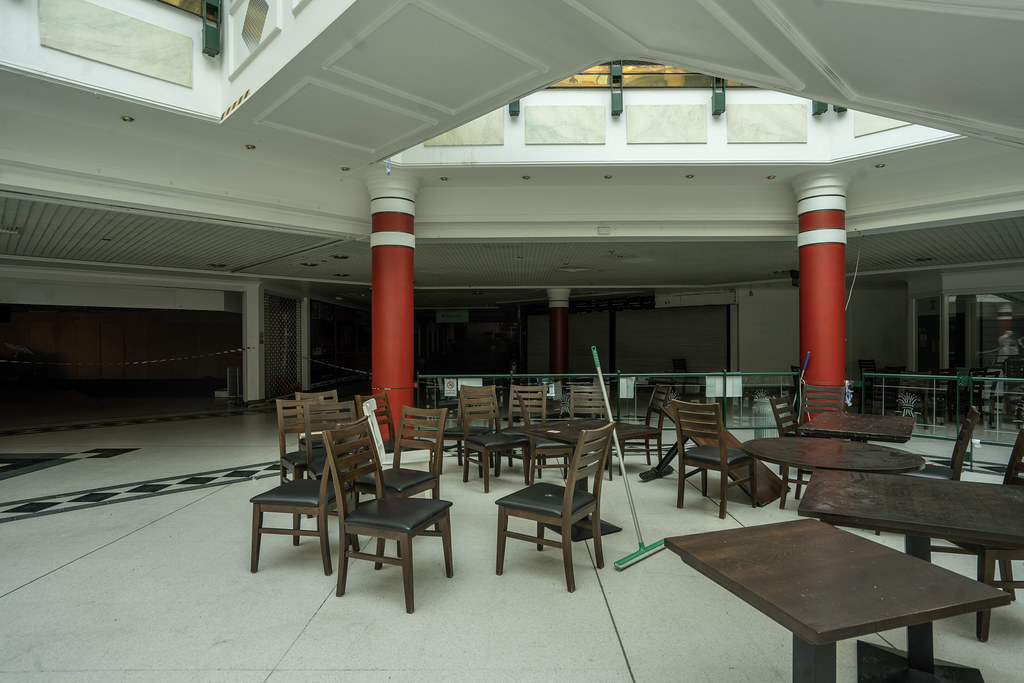 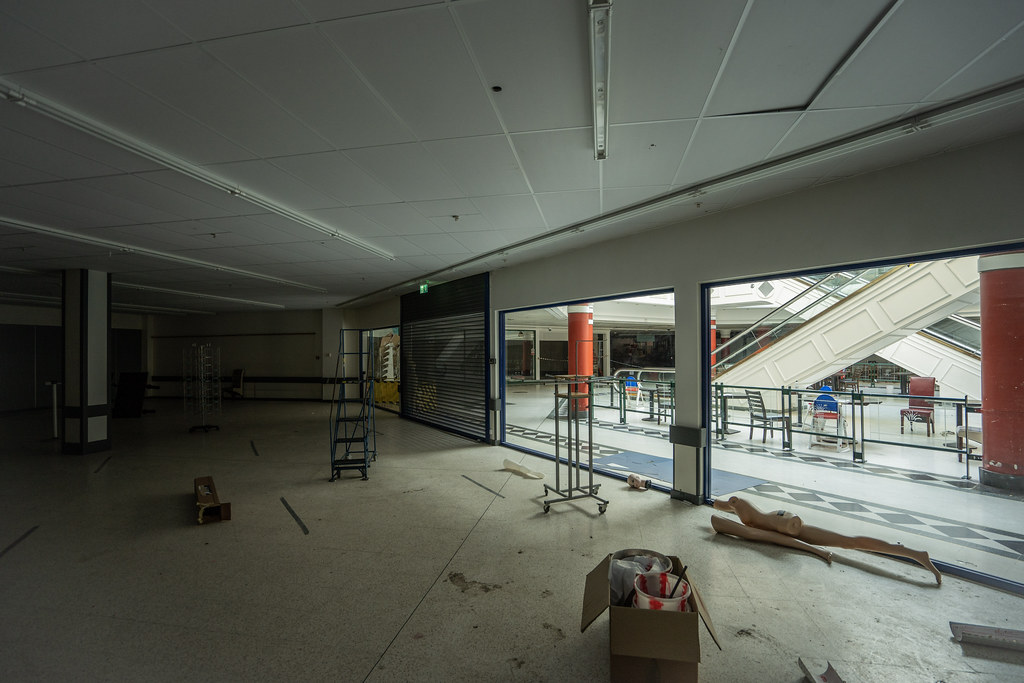 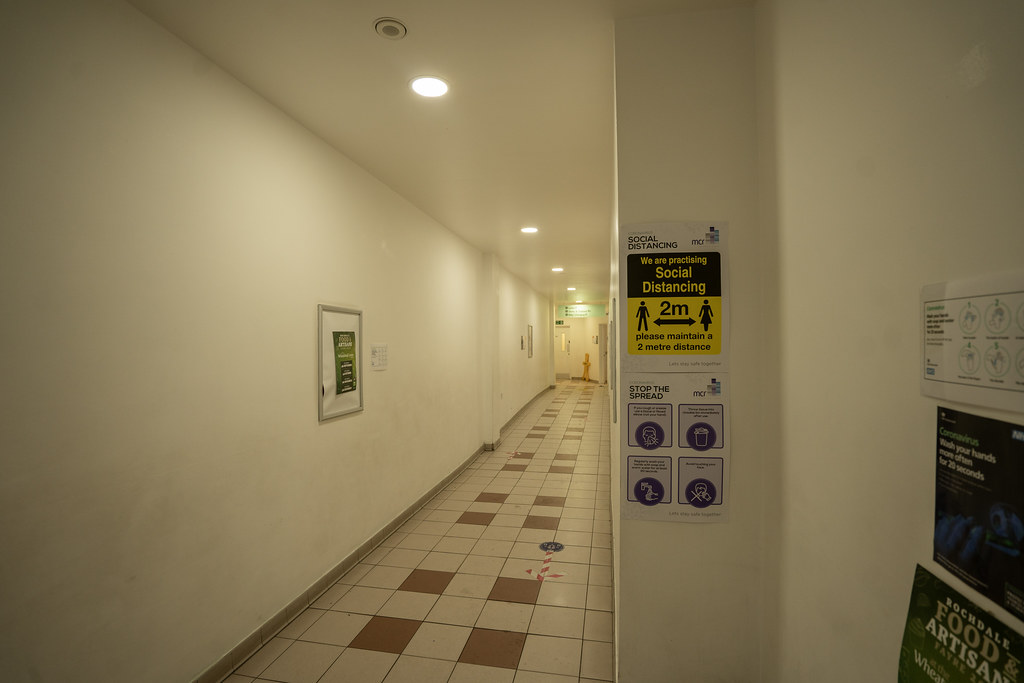 Corridor to toilets. In some places, the power functioned, whilst in others, it had been cut. 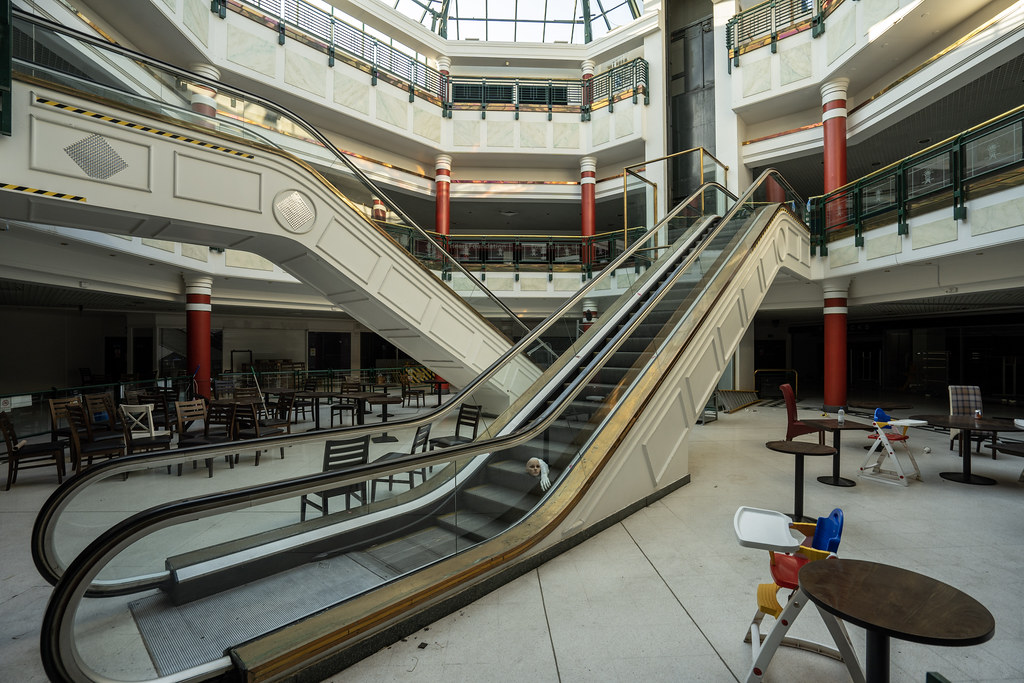 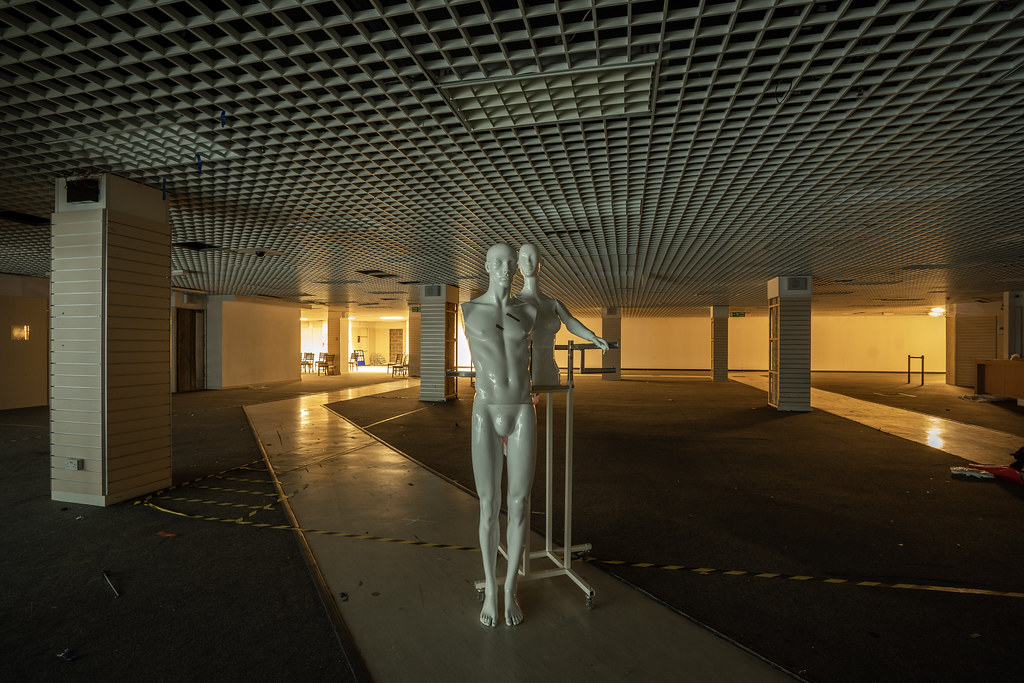 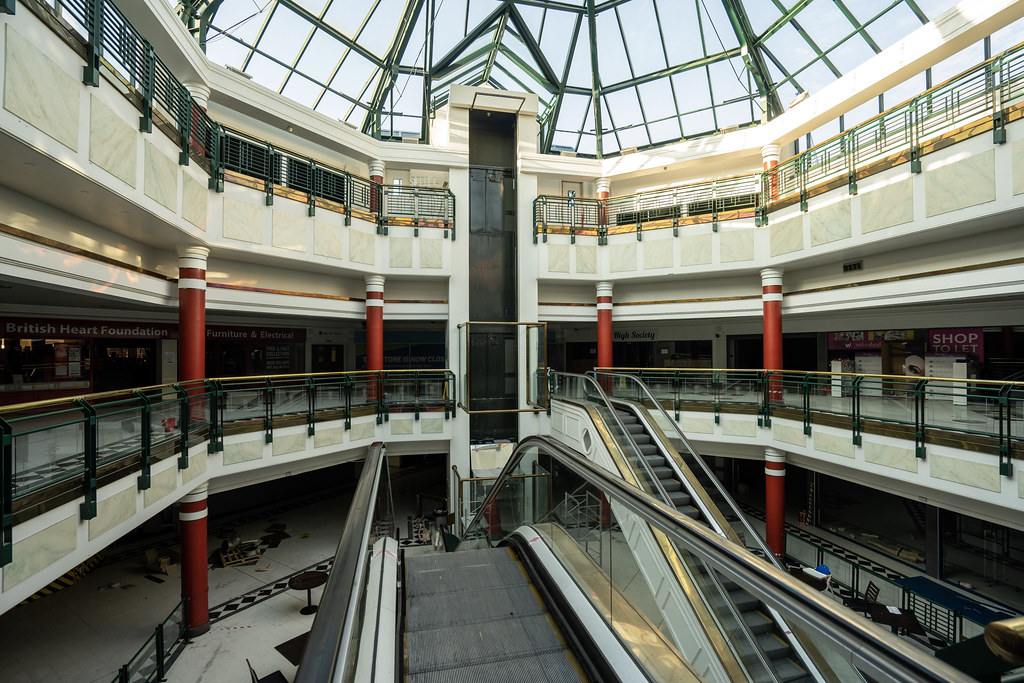 Up on the second floor. 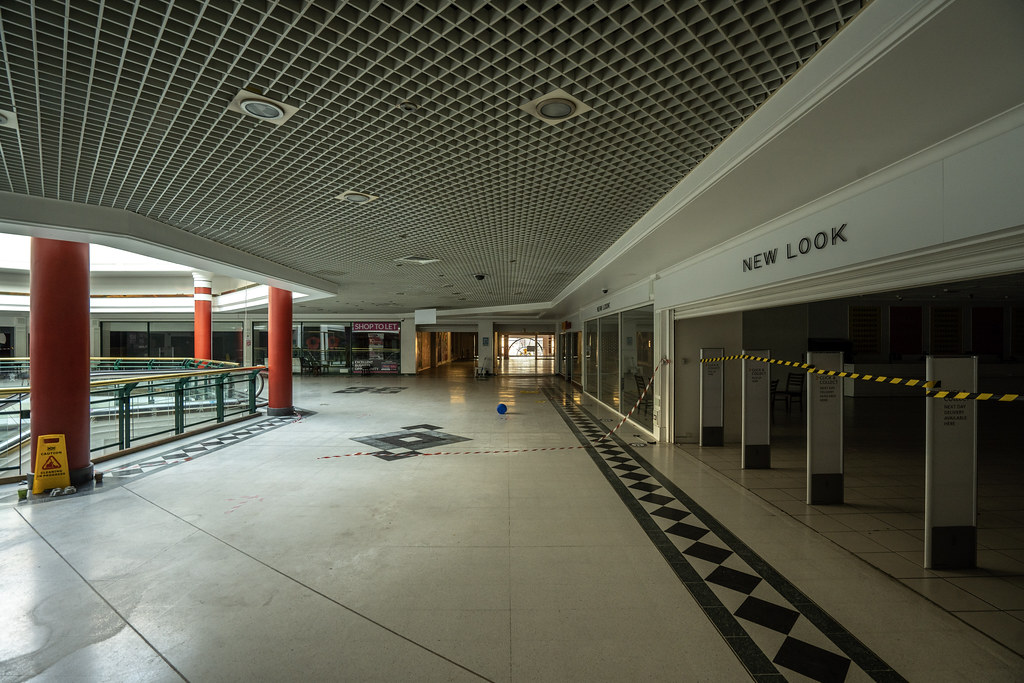 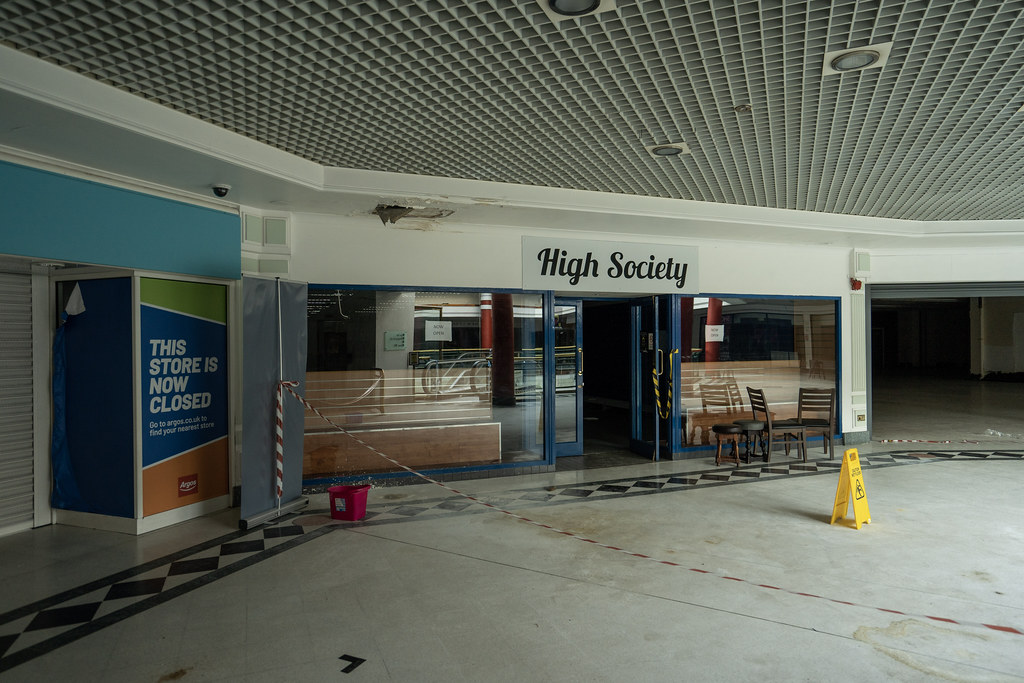 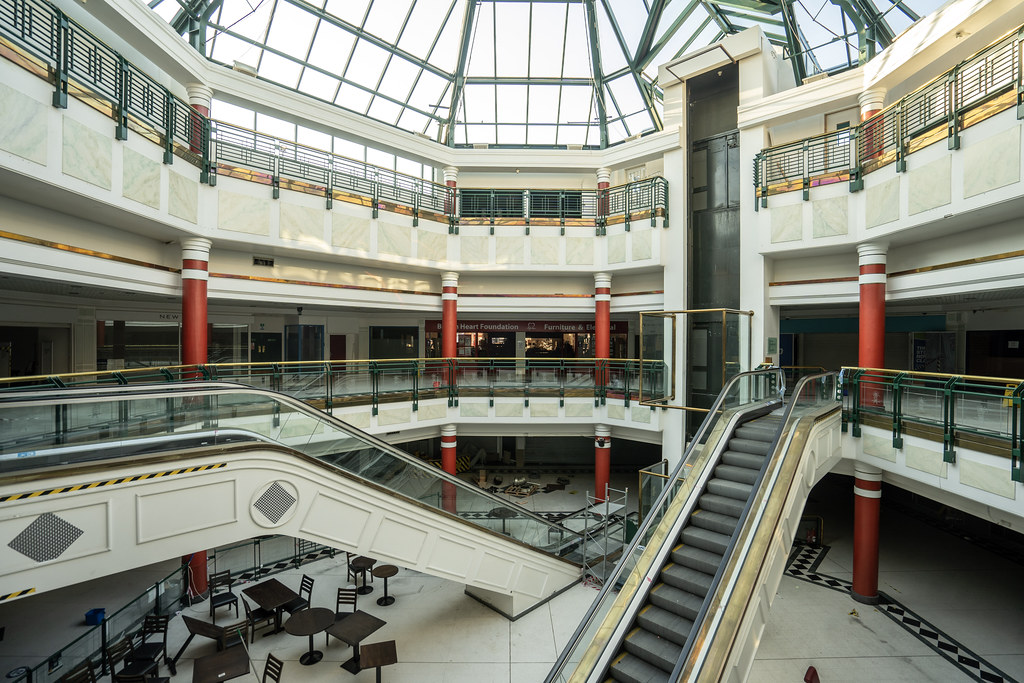 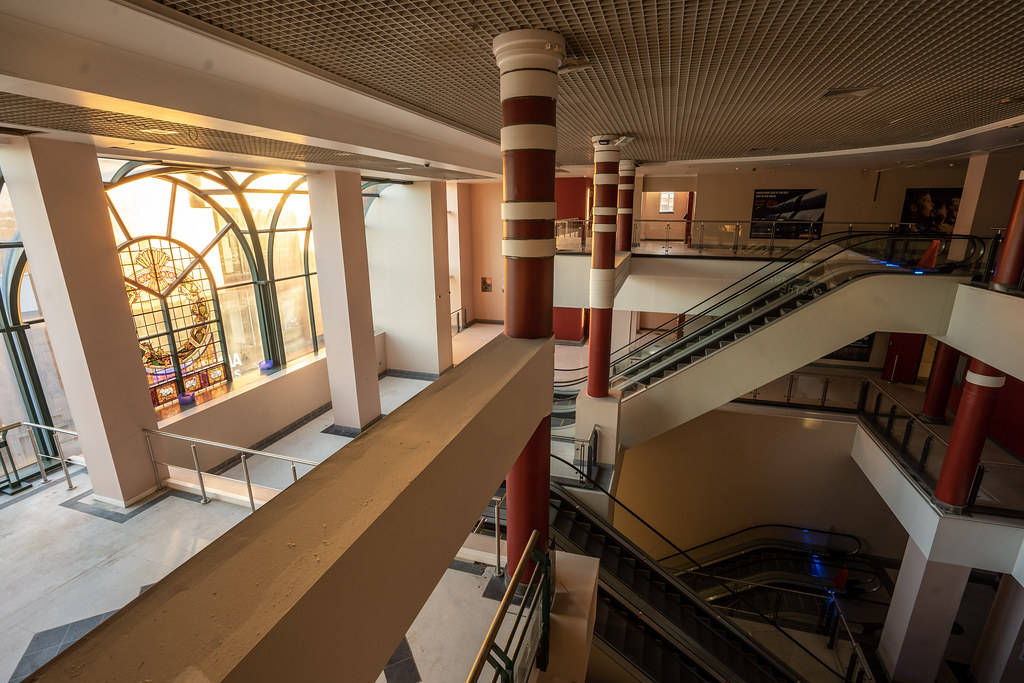 Another entrance to the mall. I believe that this was built more recently, but I like the character they kept with the window. 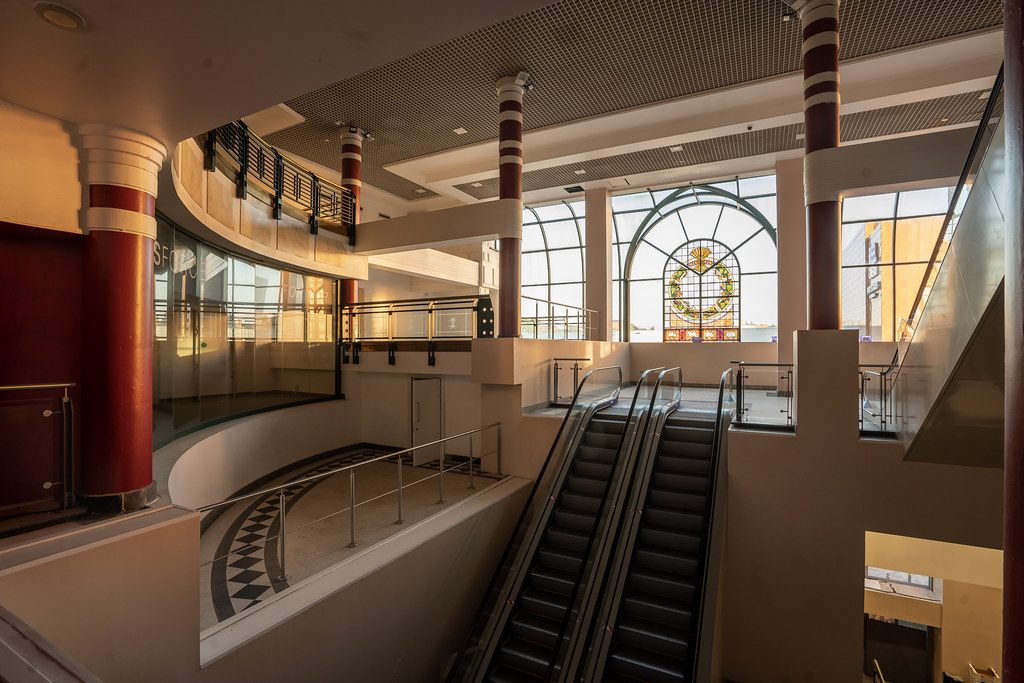 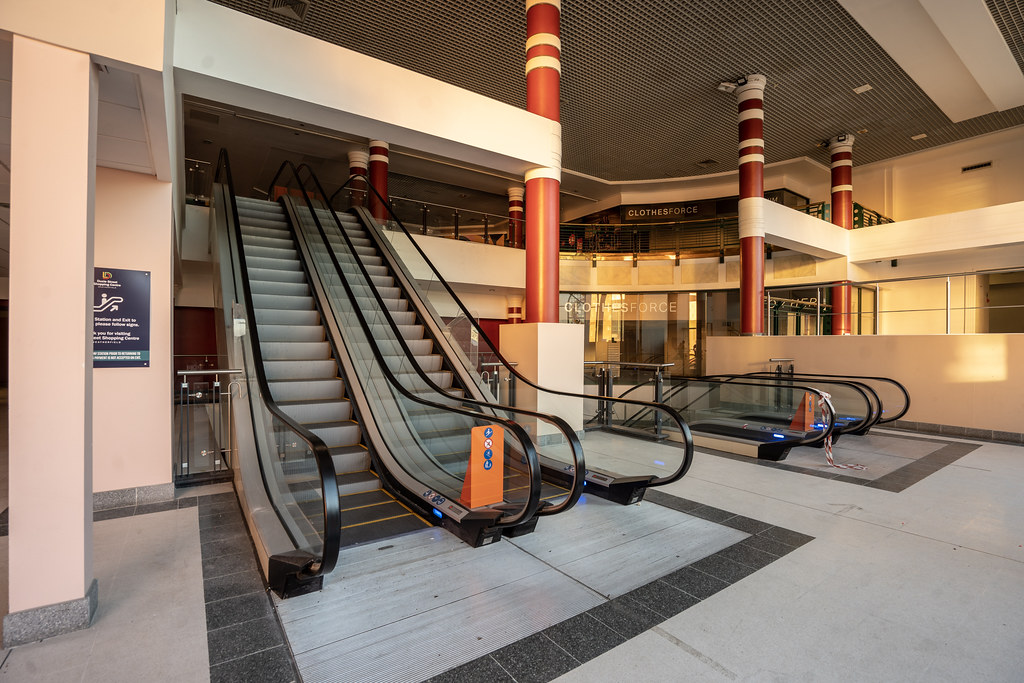 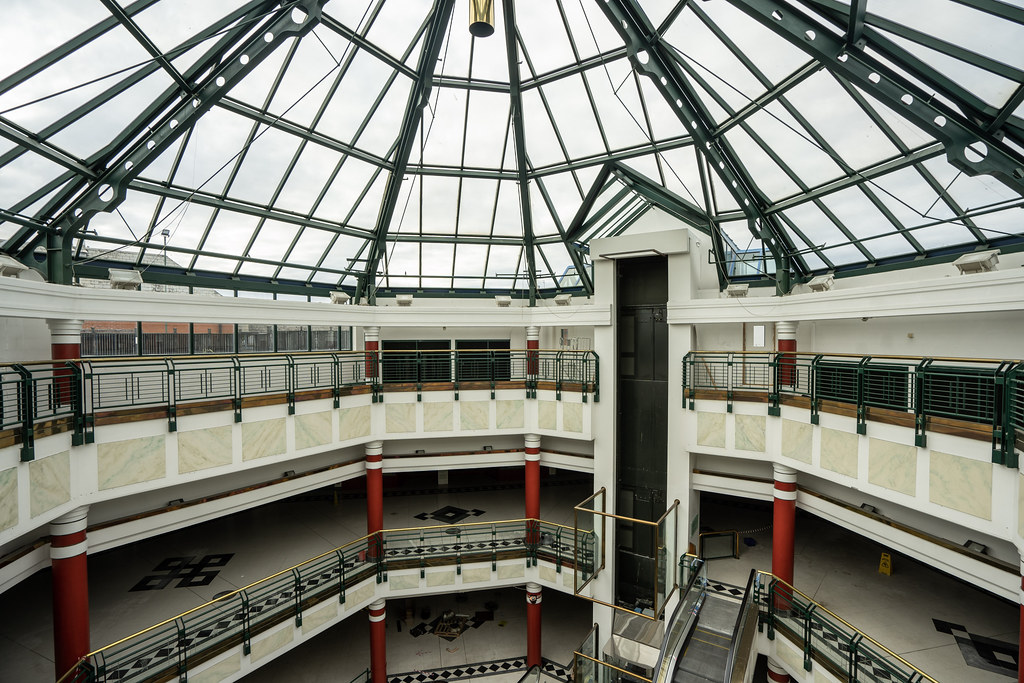 At the top floor, overlooking the central atrium. No shops up here, just a thing corridor for maintenance.

We put a video up on this one. It covers the shopping centre's past, present and future through cinematics and narration. Check it out if you'd like, dislike it if you would also like:

Decent that, something a bit different. The shot will the stained-glass window and escalators is a cracker.