The roof was designed by Sam Scorer and built with the engineer Dr K. Hajnal-KÃƒÂ³nyi

The canopy, once part of a former petrol filling station, was built in 1960-1 by Hugh Segar (Sam) Scorer, of Denis Clarke Hall, Scorer and Bright, for Messrs. A. H. Turner Ltd. The total cost was Ã‚Â£4,500. The canopy takes the form of a hyperbolic paraboloid shell roof, also known as a saddle roof because of its distinctive shape. An article in Concrete and Constructional Engineering (February 1962) shows the simplicity of the original structure. Thin shell concrete roofs were invented in Germany around the 1920s, as a means of achieving large spans with limited materials and at low cost. The strength of the roof lies in its shape, and the way it carries the loads by the forces exerted in the planes of the shell, rather than by the weight of their materials. The first shell roofs were simple barrel vaults. The earliest known to survive is Wythenshawe Bus Garage, Manchester, built 1939-42 (Grade II*), and it was only in the post-war years that experiments in the form were taken further. One of the first engineers to specialise in concrete shell techniques in Britain was the German refugee Dr K Hajnal-KÃƒÂ³nyi, who arrived in London in 1936, and who went on to work extensively with Sam Scorer. Scorer became fascinated by the possibilities of shell roofs as a student, and designed a hyperboloic paraboloid roof as early as 1956 on a water tower in Ilkeston, Derbyshire. Meanwhile, in Mexico, Felix Candela was famously experimenting with Ã¢â‚¬ËœanticlasticÃ¢â‚¬â„¢ or shells with double curvatures of opposing convexity and concavity, from which the hyperbolic paraboloid emerged as his favoured shape. The form was particularly appropriate for developing countries because of its simple materials and low cost. The Ã¢â‚¬Ëœhypar', as it is sometimes known, enjoyed a brief fashion, seen in buildings such as the Commonwealth Institute of 1960-2 (Grade II*) and two other buildings by Scorer in Lincoln: the former Lincolnshire Motor Company Showrooms of 1958-9 (Grade II) and the Church of St John of 1962-3 (Grade II*). The distinctive appearance of the canopy at Markham Moor gave it landmark status during the 1960s and 70s. In the late 1980s it ceased to be used as a garage, and a roadside restaurant was built beneath the canopy.
Click to expand... 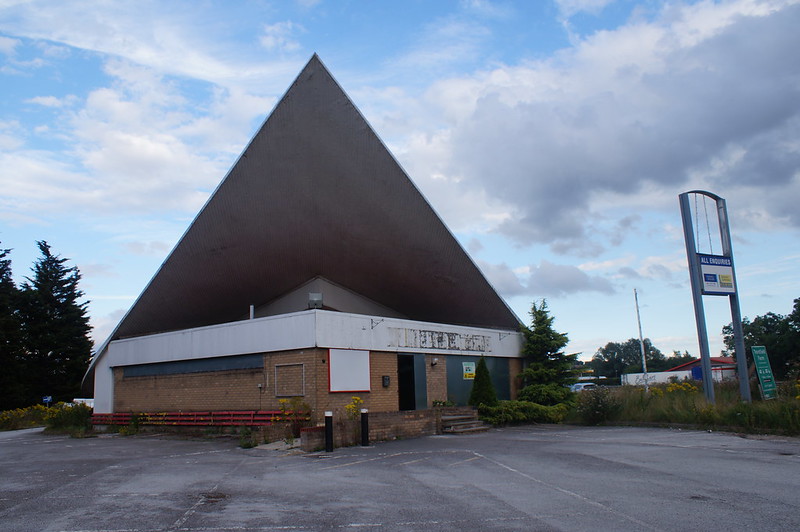 Strangely odd and very different, I like this and lovely shots! Nice one!

This has gotta be the most bizarre lookin little chef I've ever seen! And wierder too that, on passing this very building on the route north fae my trip to the English Riviera I thought 'fuck me, that's a bizarre looking little chef'. Then it appears on here a couple days later. Spooky!

lovely stuff , not been to a little chef in about 10 years, cheers !

Interesting looking place, thought you would have scaled the very tip of it though!

That's one gorgeous super model on that there ski slope.