Awhile ago someone on the Oblivion State IG account asked me to post a photo report of a power plant, and well I'm finally getting around to it. Except instead I'm posting a completely different power plant, one that was much less well known and I only know of one other person who managed to explore it before it was gone.

The Willow Glen Power Station was located along the banks of the Mississippi River in Louisiana, and was commissioned in 1960. The plant's boilers could burn natural gas or oil. Demolition began in 2019 but was halted, probably due to Covid. This ended up being the perfect window of opportunity for me to explore it.

I arrived pre-dawn on a Saturday morning and noticed a police officer and a security guard were present at the booth and the front gate was wide open. This was a little suspicious, and I was also worried that this could mean demolition workers would be showing up today, so I decided to wait until sunrise to see what would happen. I drove off elsewhere as to not arouse suspicion and returned around 8am.

Upon my return, I noticed the cop was gone, an additional truck had appeared, and the front gate was still wide open. I still couldn't tell for sure what was going on on the property since the admin building was blocking most of my view. I found a discrete parking spot some distance away and began walking towards the plant, not sure of what my plan was going to be. Fortunately I had my drone with me, so I sat down on top of the levee and put it up in the air. I saw a white truck driving around but eventually he looped back to the security booth and went inside. This was my opportunity, so I quickly packed up the drone and waited for a clearing in the traffic. Once I saw no cars coming from either direction, I sprinted down the levee, across the road, and scrambled over the barbed wire fence surrounding the massive property.

A massive open field still stood between me and the plant, and there were definitely going to be some sightlines where security could see me if they were looking my direction. There weren't really any other options to approach stealthily however, so I made my way to the plant as quickly as possible, using a few patches of tall grass for cover here and there. Finally I made it to the bottom of the turbine hall, and since demolition had already begun, the building was essentially wide open. I soon found myself standing at the massive concrete foundation for one of the turbine-generators, and then anxiously made my way up to deck level. 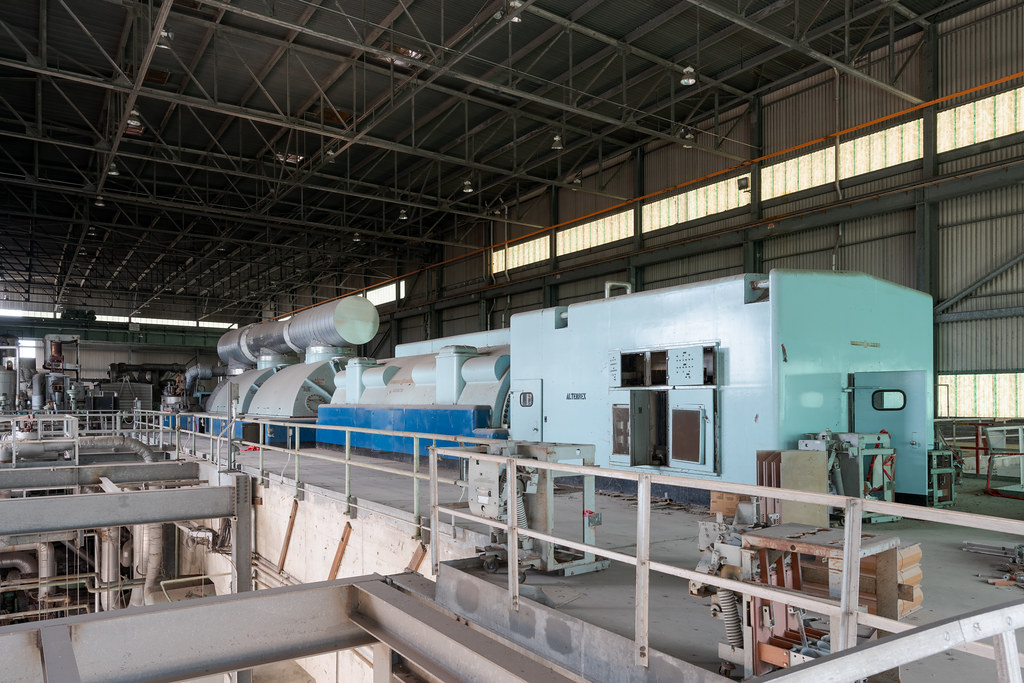 Willow Glen was built in 3 separate blocks. The first one that I entered was block 2, which featured units 3 and 4 built in 1968 and 1973. What immediately struck me about this plant was how cheaply it was constructed. It was probably the most budget looking plant I've ever been in. There was no attempt to make anything look nice in here, yet there were still many opportunities to find unintentional beauty in the utilitarianism of it all. 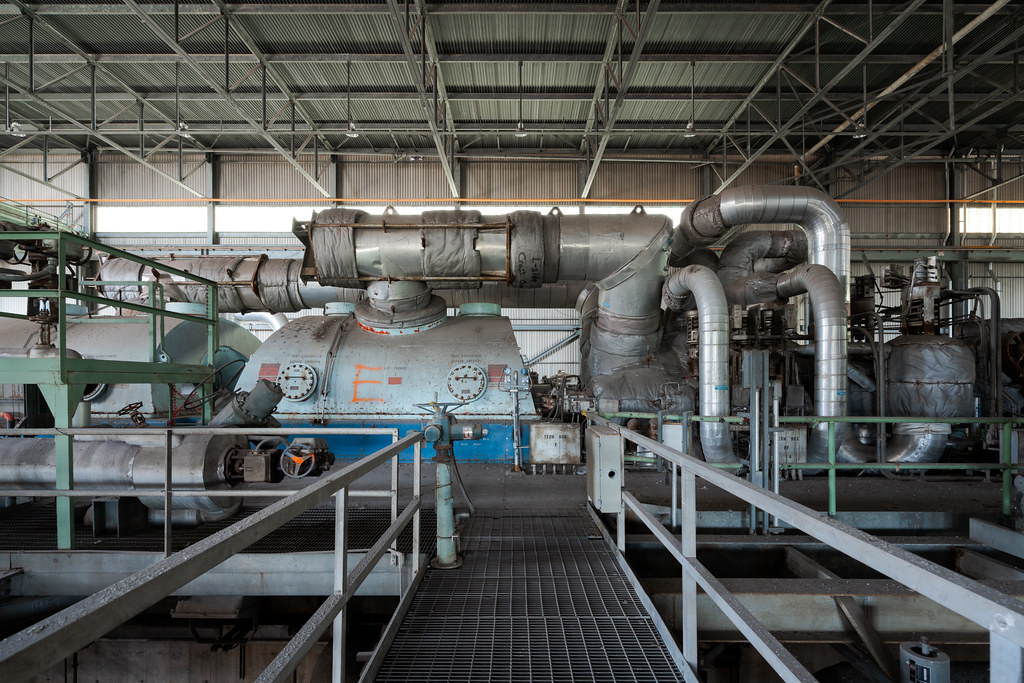 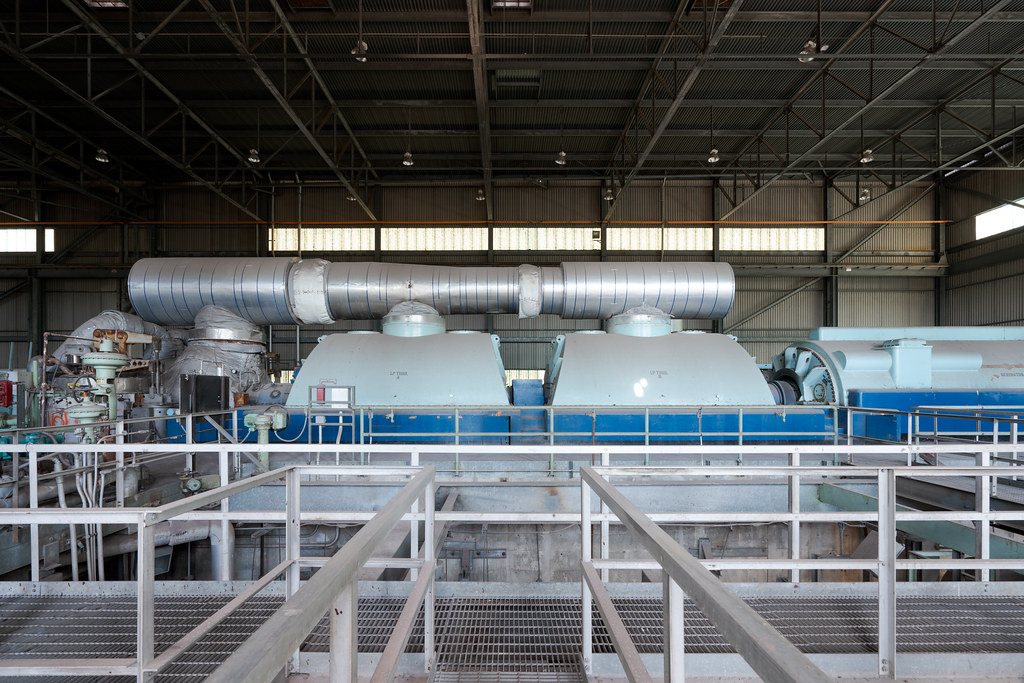 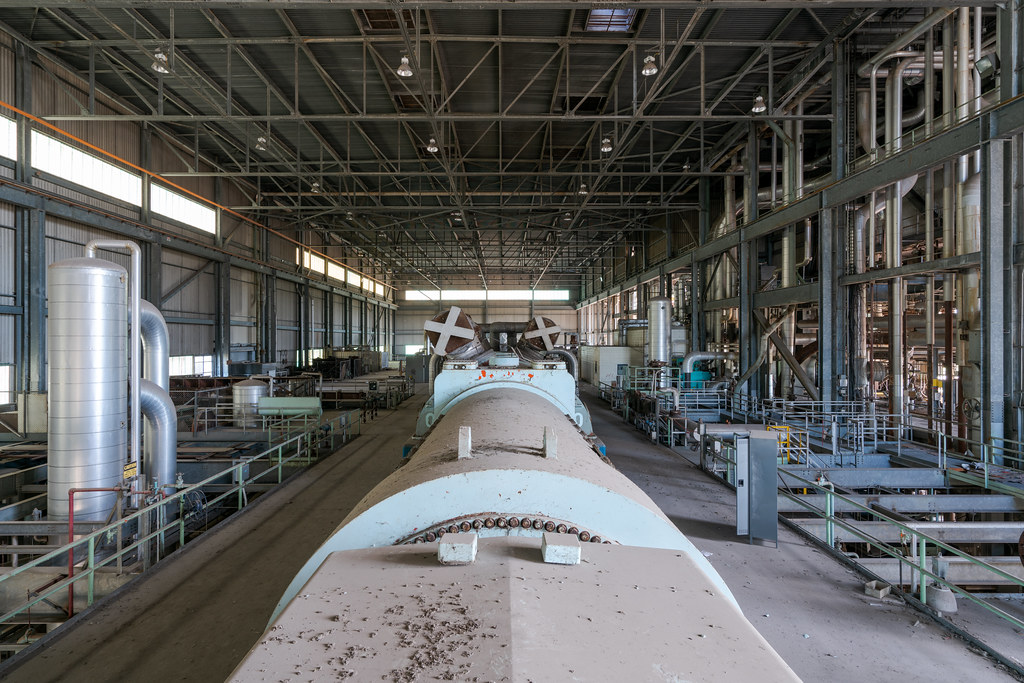 Standing on top of unit 3. 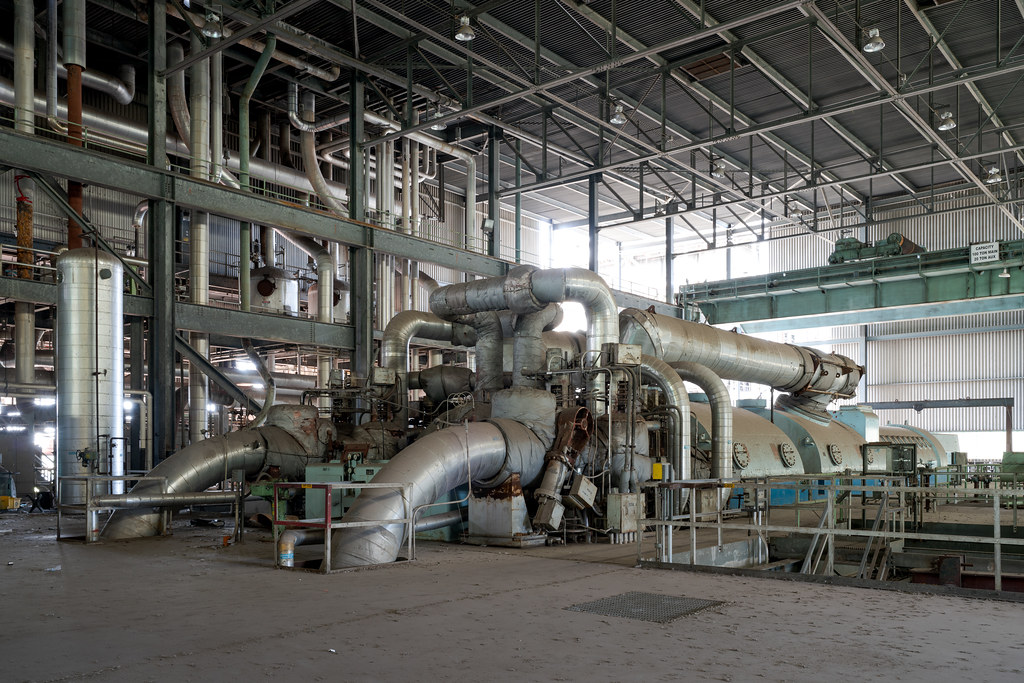 Next I made my way into the control room for these two units. 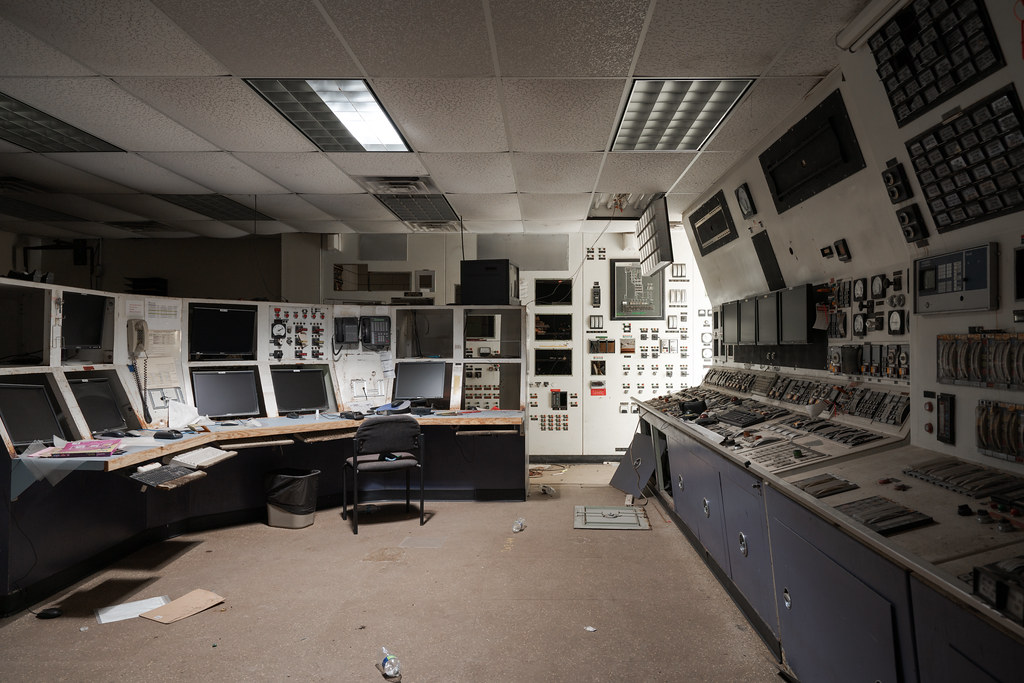 A lot of digitization had occurred, but fortunately there was still a lot of tactile, analog goodness left behind. In some worse case scenarios I've seen entire original control rooms removed to be replaced by a couple of desks and computer screens. The room also lacked natural light however, so it ended up being my least favorite of the 3 control rooms to shoot.

To make my way to the older block of units, I had to cross a bridge, which seemed like it's structural rigidity might have been somewhat compromised by the ongoing demolition. I scampered across nervously and made it to the solid concrete turbine deck.

These units were built entirely outdoors, a trend that began in the late 1940s and became especially common in the southern US. As for why they changed their mind and decided to switch back to an indoor turbine hall for units 3 and 4 I don't know. 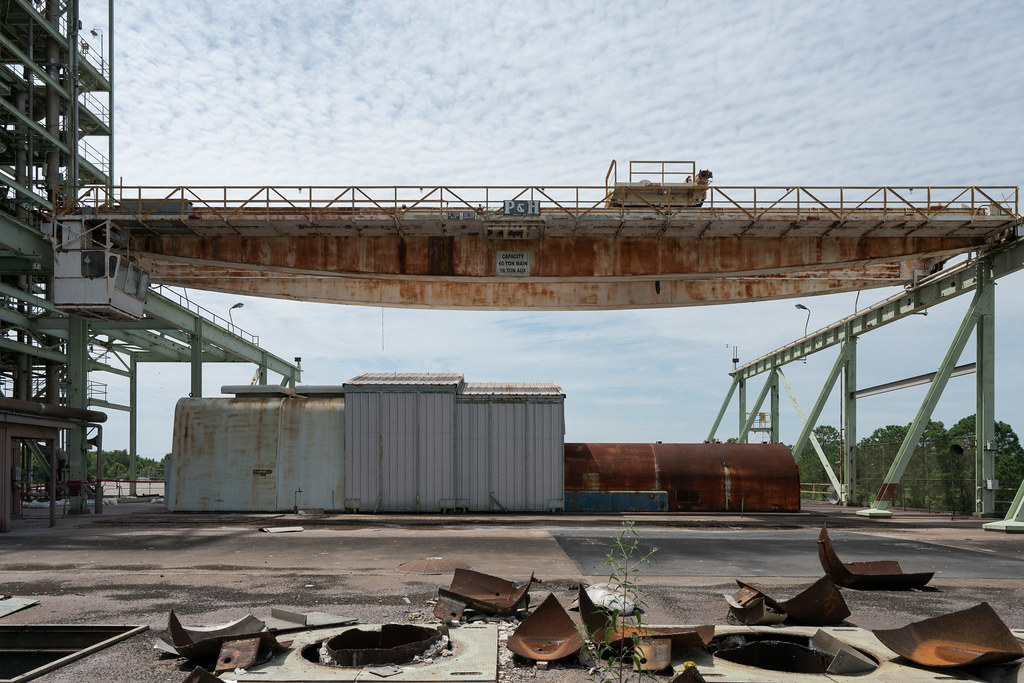 The pairing of GE and Westinghouse is repeated in the first block. Here is unit 1, a 163 MW Westinghouse. 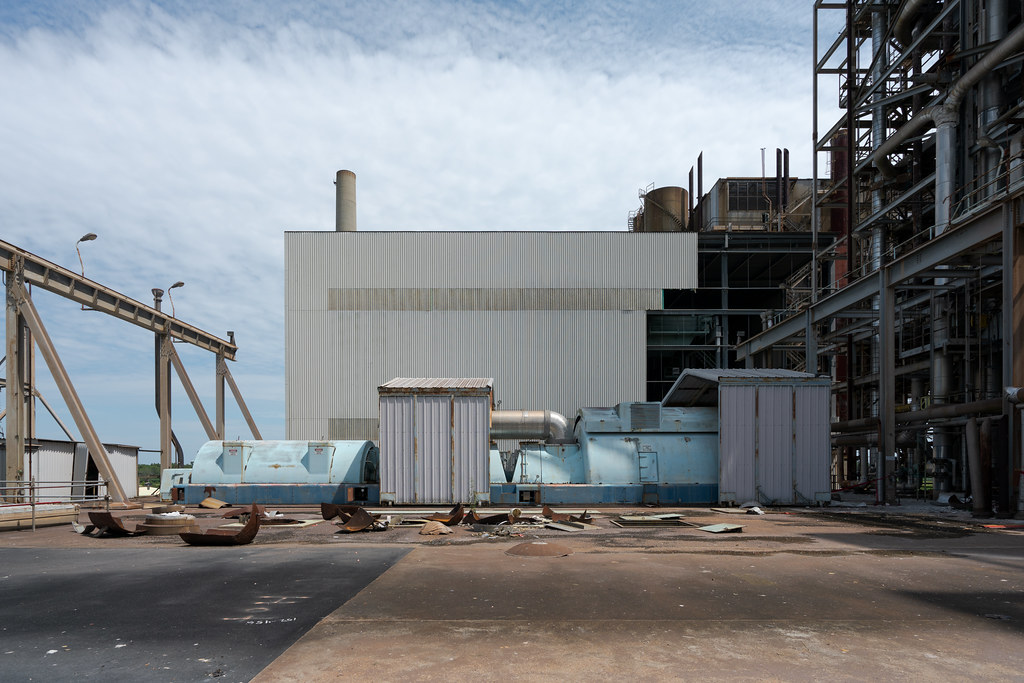 And unit 2, a 239 MW GE. This plant definitely isn't winning any awards for style. 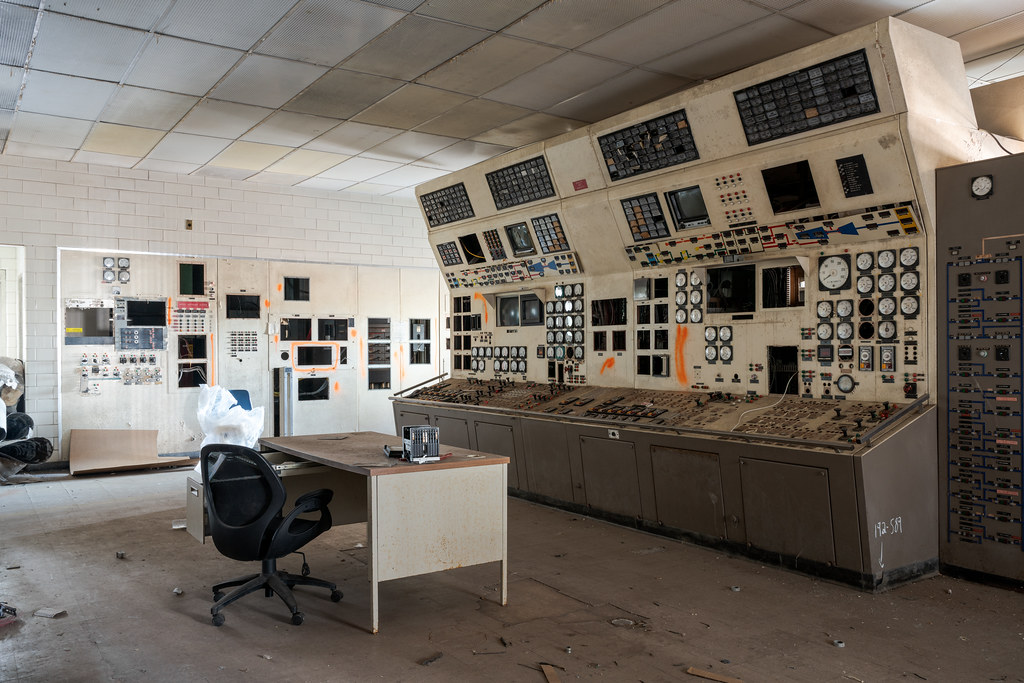 The control room is where things got more interesting. Some enjoyable features included a relatively in tact panel, tiled walls, a translucent ceiling that would have been fully illuminated in it's day, and a 1960s beige color scheme that was further enhanced by yellowing plastic everywhere. It felt like being inside a computer from 1995. 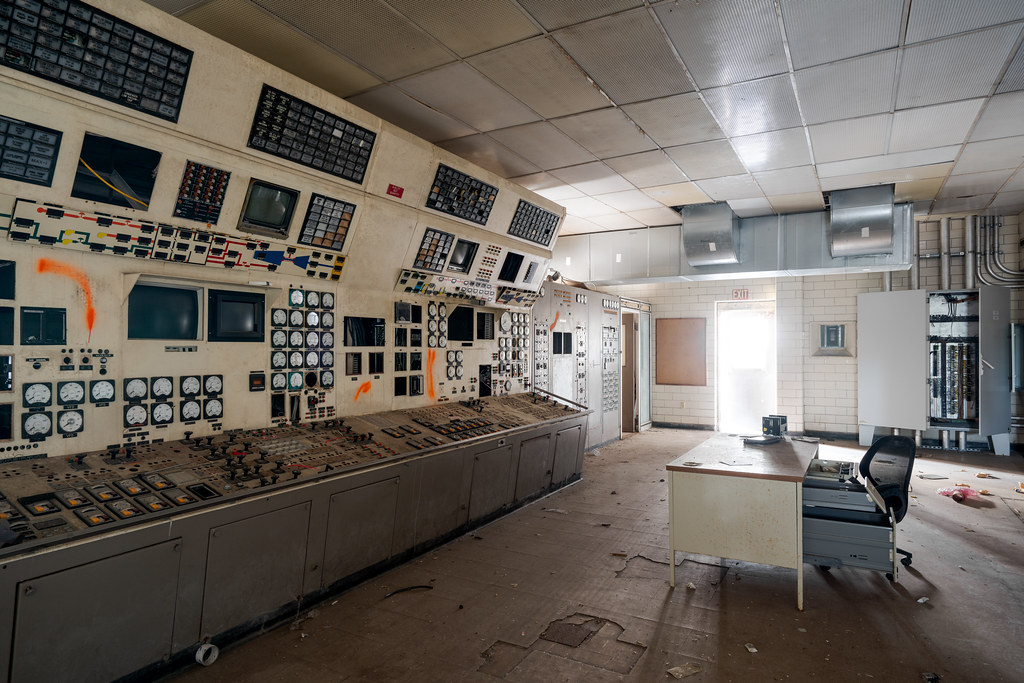 Moving on, it was time to check out the 3rd block. This one consisted of only unit 5, and was built in 1976. 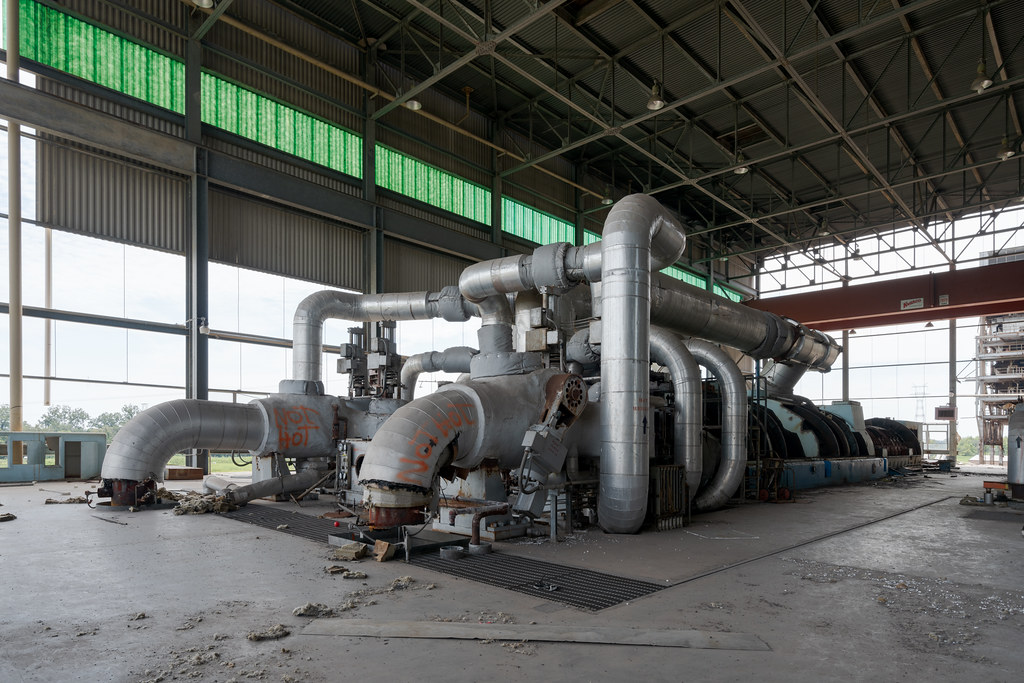 This is where demolition had begun in 2019, and the boiler was entirely gone already. Most of the sheet-metal walls were already gone as well, creating a very unique open-air feeling. 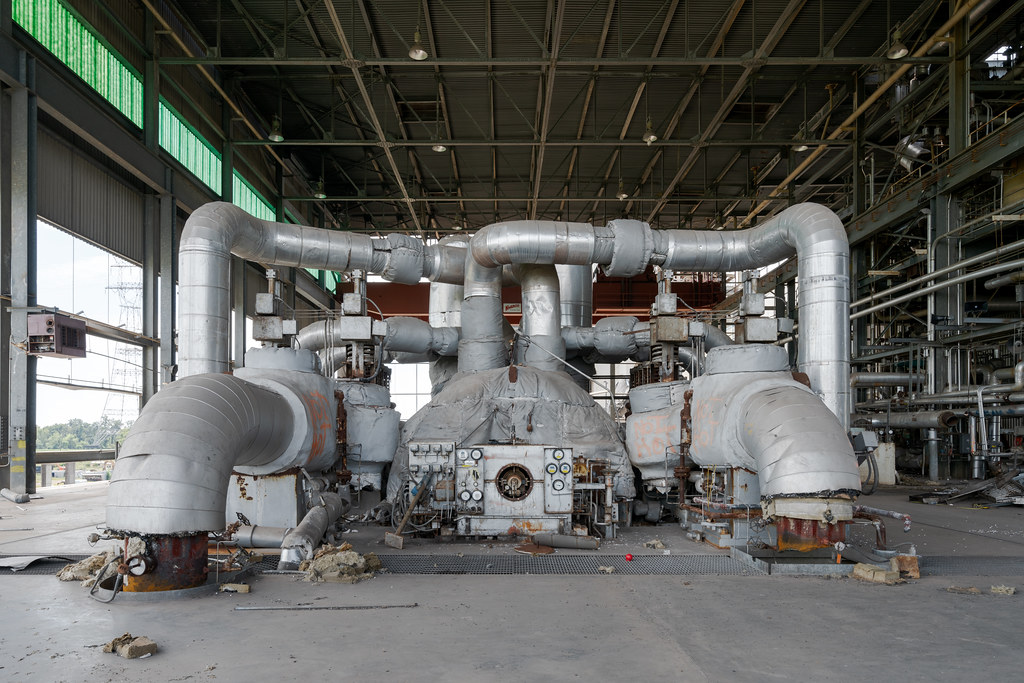 I did have to be more careful here and watch my sightlines to the security booth to make sure they couldn't see me. 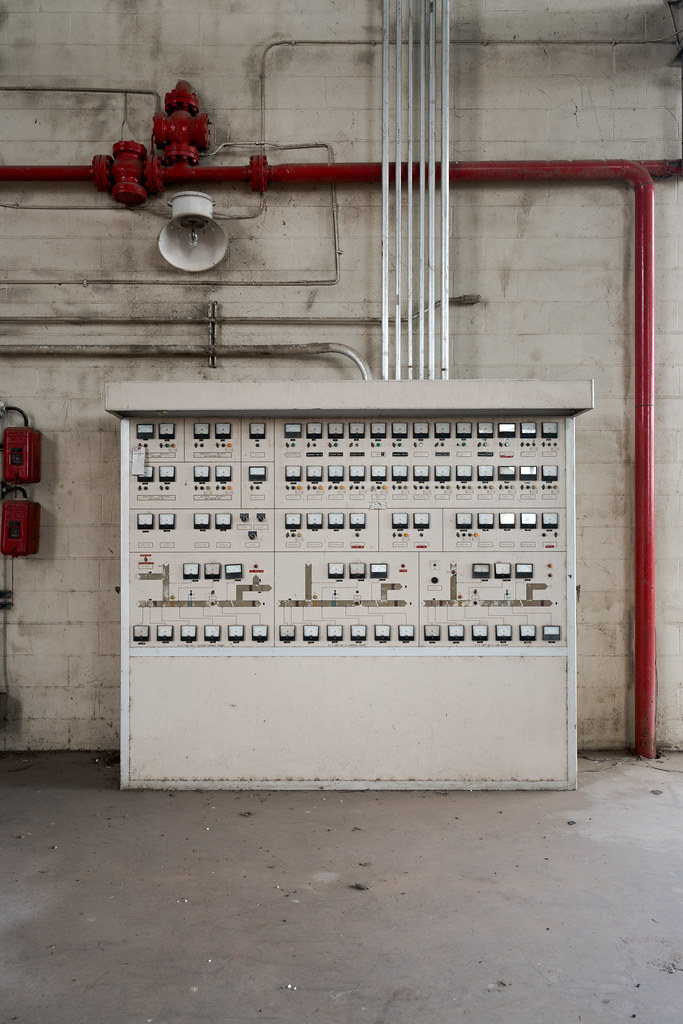 A panel on the unit 5 deck. 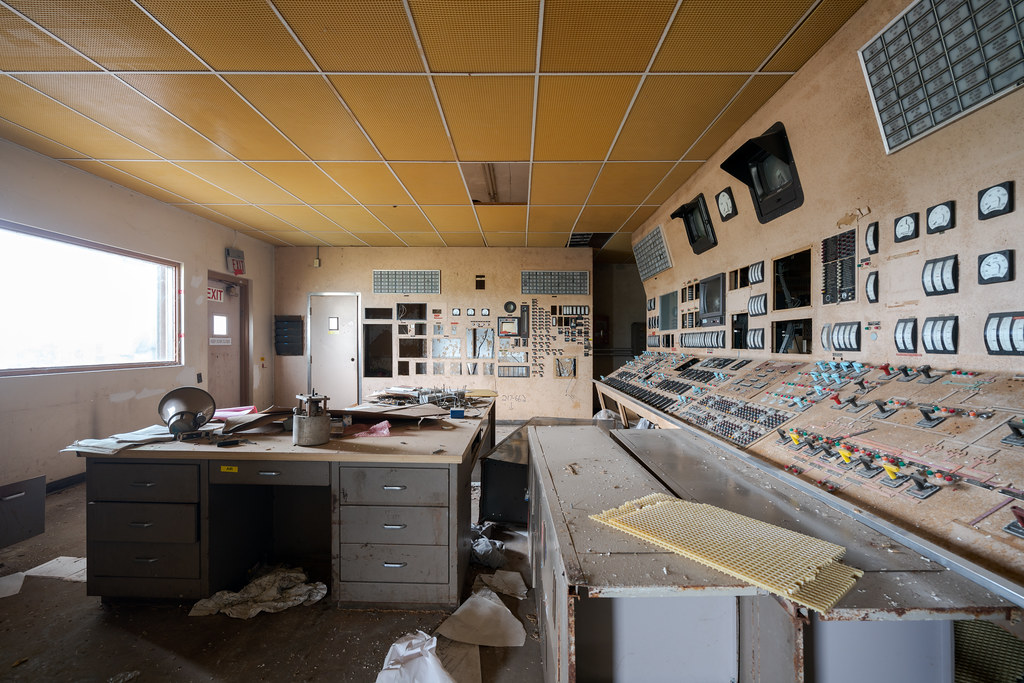 Unit 5's control room was definitely the highlight of the entire plant for me. It took the yellowing plastic aesthetic of the first block's control room to another level. 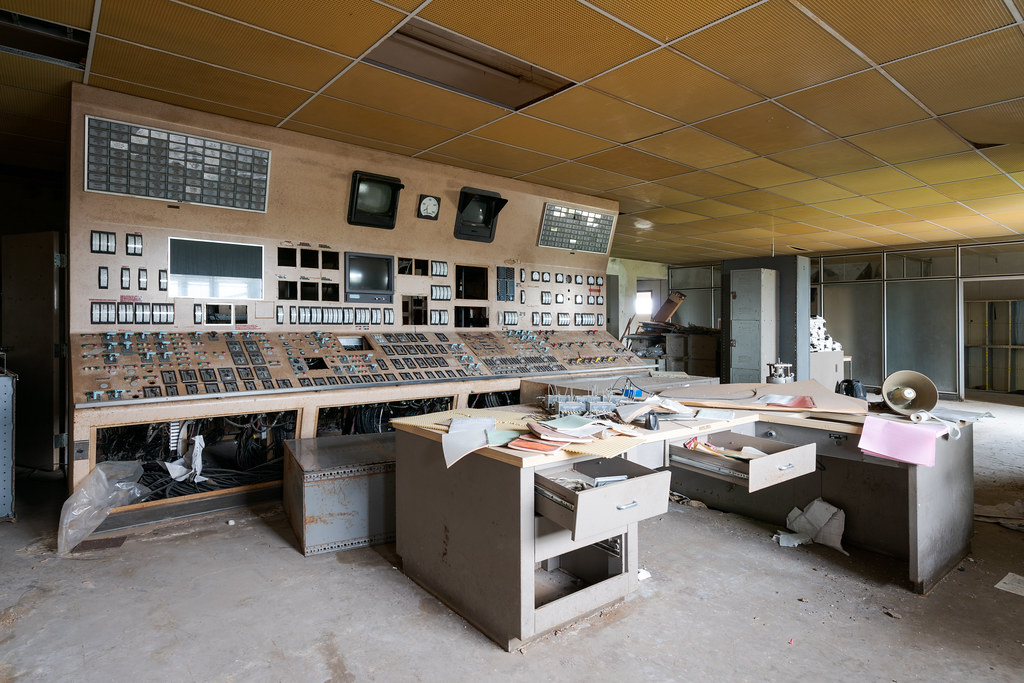 Space was left to expand the control room if a unit 6 was ever added. 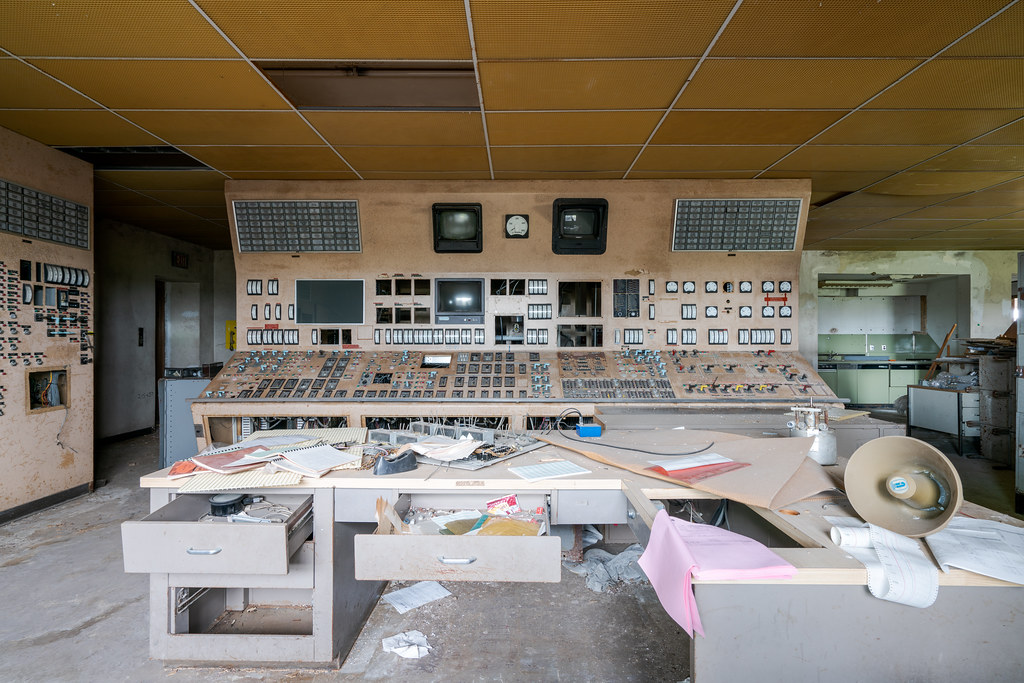 A wasp was literally inside that megaphone while I was taking this shot, directing very threatening buzzing noises right at me. So with that, I decided it was time to leave.

After making an escape that was equally as difficult as the entry, I was out with my photos. Despite the plant's utilitarian nature, I enjoyed it way more than I expected to. There's nothing like experiencing these hulking pieces of infrastructure in a silent and decaying state. Today the site is entirely demolished. My only regret is not getting some exterior shots, but given the fact I was about to pass out on my hike back to the car, it's probably for the best I didn't stop and cook any longer in the summer heat.

Anyway, thanks for reading and I hope you enjoyed!

Very enjoyable and nice report! It's quite interesting to see how much the US power stations differentiate compared to the ones in Europe.

I'm looking forward to your next report!
B

really cool ^^ what altitude did you fly your done to scout?

bob said:
really cool ^^ what altitude did you fly your done to scout?
Click to expand...

I think I went pretty high, like 1,000 ft, cause I didn't want security to hear it above them. It was the mavic air so it just took up about the space of a lens in my backpack. Nice little tool to have.

Wow, this is fantastic! Nice scouting work too, always worth being patient at these kind of places