Glen Parva was constructed on the site of the former Glen Parva Barracks in the early 1970s as a borstal and has always held young offenders. Since its opening in 1974 the establishment has seen considerable expansion and change and now serves a catchment area of over 100 courts, holding a mixture of sentenced, unsentenced, and remand prisoners.

In 1997, Her Majesty's Chief Inspector of Prisons walked out of an inspection at Glen Parva because conditions were so bad. After a subsequent inspection a year later, the report stated that there was "hope for the future" for the prison but added that a lot of work still needed to be done, and recommended that some staff should be moved because of their attitude towards inmates.

Late night mission to this place made the entry a slight more easy then in the daylight, secca made this explore a lot more challenging haha! but a shame it had to be in the dark and access to most of the rooms made me see only a slight percentage of this place.  but i seen what i wanted to thankfully! And cheers to the lot that helped! 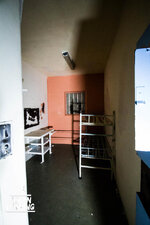 Well done on this one, quite a place!

That's pretty impressive... you can't beat sneaking into a prison!

Liking that, who doesn't like a derp prison? Good effort

A really impressive place, thanks for showing us!

I used to work there. I think you’re on unit 14. It was actually unit 13 but there is a government order to not use 13 as people are superstitious! I have a few story’s about that unit.
You must log in or register to reply here.
Share:
Facebook Twitter Reddit Pinterest Tumblr WhatsApp Email Link