I remember visiting the "Bureau Central" a fair few years ago and noticing the massive steel works next door that the offices were once the headquarters for. The entire works seemed to be abandoned, although the old office block had clearly been out of use for a lot longer. We added it to the list of places to check out and then forgot all about it.

A few years later we found ourselves back in the area and I noticed the massive steel works that dominate Florange once again. This time around I was a lot more interested and we went for a drive around. It looked great, so added it to the next trip map. A couple of trips later, we'd had two visits to cover the place relatively thoroughly.

The late nineteenth century saw rapid developments in the production of iron. Areas with an abundance of iron ore benefited from the expanding industry and large plants were constructed. The blast furnaces and steel works in Florange is one such example, with massive expansion taking place in the early twentieth century. The first blast furnaces were built at the site in 1906, and later a huge steel works to convert the iron into steel.

The blast furnaces and steelworks while they were in use​

One of the oldest remaining parts of the site is a huge hall with 1919 emblazoned above the main entrance, which now contains a set of turbo-blowers for injecting high-pressure air into the blast furnaces. The hall would have originally contained an array of classic industrial machinery including mechanical blowers and alternators similar to those found at Power Plant X in Luxembourg. Electricity generation on the site ceased in the 1950s when Richemont Power Station took over, running on the blast furnace gasses produced by a number of steel works in the region.

Production of iron and steel ceased in 2012 when the last remaining blast furnaces at the site were mothballed. It was announced the two blast furnaces would be maintained so they could be restarted if market conditions improved in the future, but were permanently shut down the following year.


Bureau Central​
​
Let's start off where it all started off. The Bureau Central, the main offices of the Wendel empire.​
​

Exterior of the old office building. Not bad, eh?​

The interior has seen better days​

Workers at the blast furnaces, pictured in 1952​

Coal wagons lined up below the blast furnaces​

Base of one of the blast furnaces​

Inside a blast furnace building​

Inside another blast furnace building​

Exterior with the water tower in the distance​ 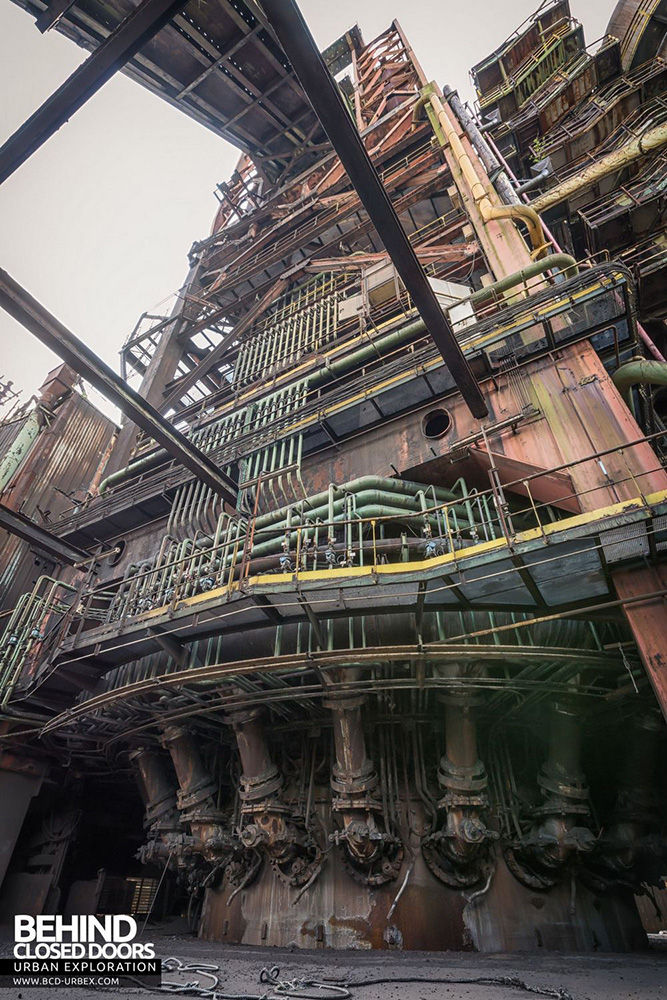 View up a blast furnace​

Wagons under a blast furnace​

The blast furnace control room had been modernised​
​
Turbo Blower House and Workshops​
​
The blower house is where the turbo-fans are located. They were responsible for blowing the huge amounts of air required by the blast furnaces. This cavernous building would have once housed a set of classic engines for blowing the air, along with a power plant, all of which was removed in the 1970s.​

There was one blower set for each blast furnace​

Side view of the huge blowers​

The green motor for fan 3​

Historic control panel from when older machines were used​

The machines this panel controlled were removed a long time ago​

Newer control room for the turbo-blowers​

Locker room​
​
Railway and Coal / Iron Ore Delivery Area​
​
The steelworks had its own station for the delivery of coal and raw materials such as iron ore which would be emptied into hoppers below. A lot of wagons are parked on the tracks.​

Wagons parked in the delivery station​

Nature is starting to reclaim the tracks​

Trains would drop their content directly into the hoppers below​
Steel works​
​
The steelworks took the pig iron produced by the blast furnaces and converted into steel.​

Historic photos of the steelworks, pictured in 1952​

View along one of the many long sections​

View down the steelworks​

View in the opposite direction​

Ladles lined up in the ladle bay​

One of the ladles tipped up​

Wider view of the ladles​

One of the work bays​

Crane lowered in one of the bays​

Furnaces for melting iron and scrap​

Electromagnetic lifting gear​
​
Rolling Mill​
​
The mill is where the steel products are finished off and rolled or shaped into their final forms.​

Plant in the rolling mill​

Plant in the rolling mill​

Lifting gear in the mill​

Crane hooks in the mill​

Accidental selfie with a "HFX" sign. In keeping with the other European steelworks known as "HF4", "HF6", "HFB", etc. I initially called the place HFX. It's actually the abbreviation for "Hauts Fourneaux", the French plural of Blast Furnaces.​

Great report of a fascinating location.

Great set with fascinating pics again! Although I have visited the Bureau Central repeatedly, I have never been to the steelworks next to it...

Such a good report! Loving how much detail is in it along with some fantastic images. Nice one

spot on mate,this is on one of those euro maps ive had a while gathering dust..looks bloody decent

Great pics from a great location.

Just got better and better that did ?. Aside from the epic industrial-ness I really like the level of decay in those admin buildings at the beginning